In one of the companies where I was a full-time company pumper, we had a system called “partner pumping,” which meant one pumper would pump there other pumper’s wells when they were off-duty.

For reasons only a true pumper can understand, this proved to be a pretty terrible set-up.

My partner was brand new to the oilfield and not well trained. It was around Thanksgiving, the nighttime temps were getting into the 30s, and he called to say he was struggling to get one of his heater-treaters lit.

This could have been caused by numerous issues, so I knew that a phone tutorial was out of the question. It would be faster to drive over and look at it myself.

I honked and waved at him while screaming “Nooooo!” Fortunately, I stopped him before a disaster happened.

When cold weather arrives, it’s always a good time to talk about how to safely light a heater-treater. It’s not because I think you don’t know; we all just need remainders that we are dealing with really dangerous equipment and there is indeed a safer way to do all of this.

Not 11 months ago where I live and work, a fellow pumper blew himself up and landed in the hospital with third degree burns to his face, and this guy had been pumping for years!

1.         It’s ALWAYS safer to light the pilot than the burner. To do this, it is really important for you to understand how the whole thing is made and know which valve handle controls the burner and which one controls the pilot light. This might sound stupid, but you would be surprised how many people are always lighting the burner because they don’t have a clue where the pilot valve is.

2.         For the pilot, there is usually about a two-inch hole under the fire tube with a screw-on steel cap. Get a sturdy piece of wire at least two feet long. (I use barbed wire fence spacers). I create a little loop in one end of the two-foot length of sturdy wire (use heavy-enough gauge that it can’t sag) and pull a small piece of rag through the looped end of it, then dampen the rag with diesel fuel. Don’t use gasoline, and for SURE don’t use methanol. Methanol burns invisibly with no flame, so you have no idea if you have put it out. 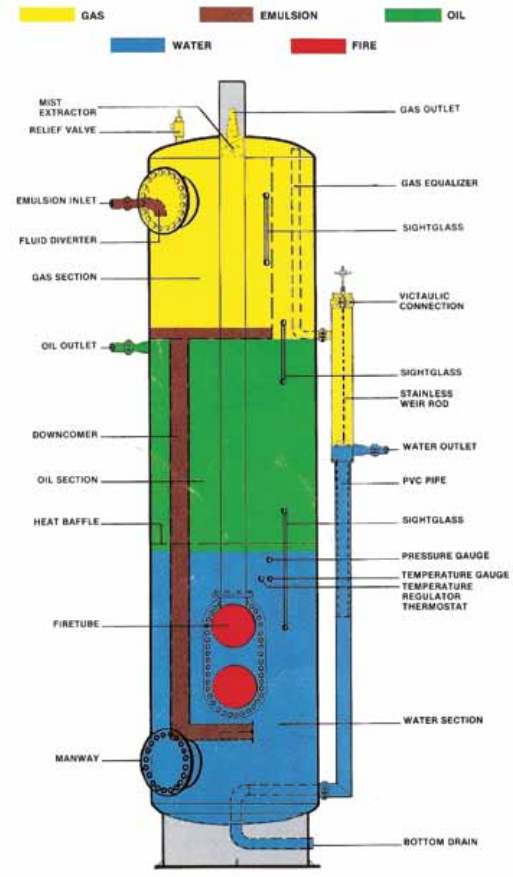 3.         While I am preparing all of this, I have already opened the face plate (usually with three or wing nuts on the front of the treater) and turned off all the gas to both the pilot and main burner to give it time to air out. If you don’t, when you stick that wire with a burning rag in there, it will explode. Not good.

4.         Wait about five minutes to be sure the gas is gone, use a lighter to light the diesel-soaked rag, then poke it into the hole made for the pilot light. Find out exactly where the gas comes out on that, but it’s usually a one-inch line running under the main burner gas tube. That way you have the lighted rag directly over it when you gingerly turn on the pilot gas. It should light with no problem. If it doesn’t, try cleaning it a little with a brush.

5.         When you have gotten the pilot light going well, ease on the main gas valve so the burner engages. You should be able to hear it engaging.

6.         Yes, there are times when the pilot is not working or staying lit and you have to just light the burner. I have a couple like that too. If you are doing this, it will require you to take the face plate off (it should already be off) and then stick your handy-dandy wire with the burning rag all the way (about 2 feet) into the fire tube where the gas comes out of the long tube that runs toward the middle of the treater (away from you). It is a three-inch tube running away from you (as you are standing in front of the treater) with a bell-shaped end.

7.         Stand well to the side of the fire tube and ease the gas on. You do not want to ever look into the fire tube while starting a treater. If there is any build-up of gas, it shoots out the front and can burn you badly.

I know that a lot of the old-timers in the field are probably laughing right now. I have seen pumpers do some amazing things while starting heater-treaters, and I have seen them injured badly too.

That said, I’d like to keep my face! How about you?

October 24, 2019
« Previous post
How I Became Known as the Wench with a Wrench…
Next post »
GreaseMonkey and the Pumper Mesh (Operator: Unchained)
Copyright 2022 GreaseBook Oil and Gas Software. All rights reserved. Patents Pending. GreaseBook is a trademark of Greasebook, LLC.