There are probably going to be several engines around a typical lease pumping operation. Obviously, there’s the engine in the truck that gets you out to the lease site. There may also be generators if the lease is far from electrical lines, or as a backup power source. They can power pumps, and do a number of other vital jobs. The engines on the lease may run constantly, and so the ability to maintain and repair the engines around the site is an important one. This is particularly true with smaller and wildcat operations, when even small expenses can have an impact on profitability. 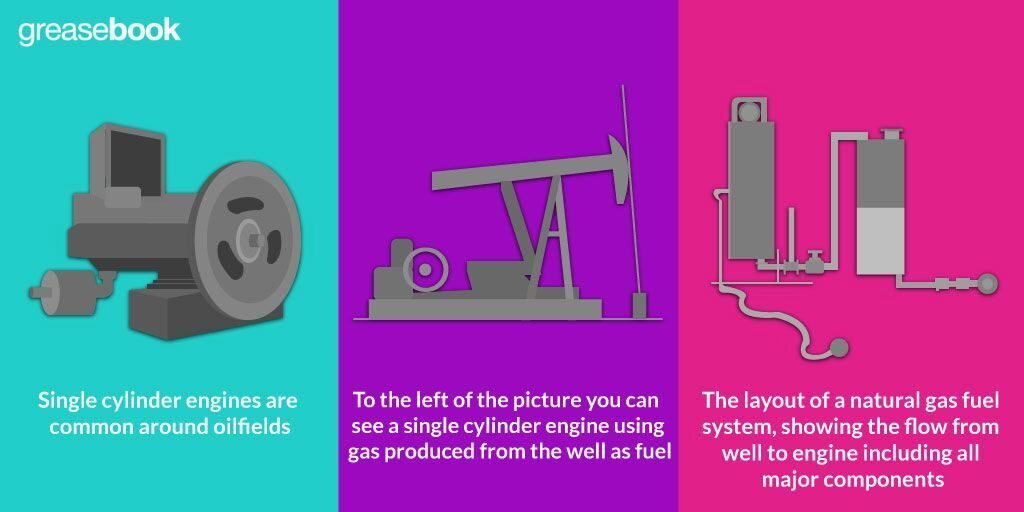 Just about every modern engine is an internal combustion engine, meaning it’s powered by small, constant explosions. Gas and air are mixed within the engine, in the cylinder, and then compressed by a piston. With some engines, a small spark ignites the mixture. In diesel engines, the compression is enough to cause the explosion. The piston is driven down by the explosion, which turns a crank and provides power.

In four cycle engines, the piston moves four times per explosion. There are also two cycle engines which moves two times per explosion, but four cycle engines are more common. The first downstroke is the intake stroke, during which air and fuel are drawn into the cylinder through the intake valve. When the piston approaches the bottom of the cylinder, the intake valves open. In the first upstroke, called the compression stroke, the fuel and air mixture is forced upward and compressed into 1/10 the original volume. This heats the mixture.

The compressed mixture is ignited by the spark plug and the piston is forced down in the power stroke by the explosion. The cylinder is now filled with the byproducts of the explosion, which are forced out in upward exhaust stroke through the exhaust valve.

Each step must happen at the correct moment for the engine to be as efficient as possible. Engine timing is an important part of how the engine works, and a mis-timed engine will often cease to work altogether. 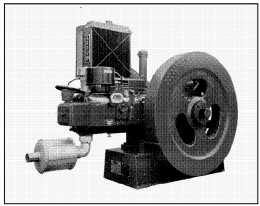 Figure 1.  Single cylinder engines are common around oilfields. This one has a large flywheel to provide smooth power. (courtesy Arrow Specialty Co., Inc.)

Figure 2. To the left of the picture you can see a single cylinder engine using gas produced from the well as fuel.

Engines with multiple cylinders have correspondingly more complex requirements when it comes to electrical and fuel systems, and may need a separate battery, voltage regulator, coil and more for each cylinder. Multi-cylinder engines also usually have a smaller flywheel and so run much more quickly.

Maintaining a working engine is always preferably to repairing a broken one. The ability to performance basic, or even more complex, maintenance on the engines around your operation is a useful skill. Some things require the services of a shop with specialized equipment and specific know-how. Most problems having to do with the piston, cylinder, or valves are going to fall into this category. Most regular maintenance and some basic repairs can be done with a basic understanding of how each system works.

The electrical system in your car powers the radio, and probably the locks and windows. For most engines around the lease, however, the electrical system is used just to provide the spark which ignites the fuel in the cylinder. The spark is provided by the spark plug. Spark plugs must be the right size and within the right temperature range. These can include standard, hot, and cold. The points on the spark plug must also be set to the correct gap setting for the engine.

Most engines will have use a magneto to provide the spark for the explosion. These will have the points built directly into the magneto, as well as the condenser, distributor, and coil. Low tension magnetos are also available and are less prone to problems, but are more expensive. Solid state ignitions are also available.

The starter is provided with electricity either by the electrical grid or a battery. Batteries should also be cared for so that they last as long as possible. That includes protecting them from weather and extremes of temperature.

Other parts of the electrical system for an engine can include an alternator or generator, distributor, voltage regulator, and whatever wiring is needed.

Oil is used to prevent friction throughout the engine, and it’s circulated throughout the engine outside of the cylinder. The amount of oil and the pressure at which it’s run through the system are two critical aspects of the lubricating system. The oil amount is measured by the level of oil in the engine. A safety measure is included in the form of a float and switch. If the oil level drops too low, the engine will shut down. A similar, but more complex, safety system shuts the engine down if the oil pressure falls too low.

Oil will also have a number of different additives in it, so the oil is doing more than providing lubrication. Some additives will improve the viscosity so that the oil sticks to the engine parts and does a better job of preventing friction. Other additives prevent rust or help to clean the engine. Oil and the additives it can contain will breakdown over time, especially when exposed to heat.

The oil and the oil filter will need to be replaced regularly. When doing so, you should use the correct weight and type of oil for each different engine.

As the coolant used in most engines is water, it is in danger of freezing in cold weather. To prevent that, antifreeze is added to the water. The main component in almost all antifreeze is ethylene glycol. It’s also effective as a rust inhibitor and as a lubricant for the coolant system. Antifreeze also has a higher boiling point, at 263 degrees Fahrenheit, so that the coolant transfers heat more efficiently. While it’s unlikely for the coolant to freeze during a hot summer, it’s wise to continue to add antifreeze for other benefits it has.
The standard ratio of water to antifreeze is 1/3, or one part antifreeze to two parts water. That mixture is optimized for freezing temperatures to 0 degrees Fahrenheit. Different mixtures are better for other climates. The table below offers some mixtures optimized for a range of temperature ranges.

The fuel that an engine uses will determine a lot about how it functions. An engine powered by gasoline will need a carburetor or fuel injector. Engines using other possible fuels like butane or natural gas will also need carburetors. Diesel engines will need a fuel injection system. You’ll have to maintain engines powered by many different fuels, so it’s a good idea to be familiar with as many as possible.

Just like your car, the gas you put in the engines on your lease should be of the right type and grade. Using the wrong grade of fuel can lead to reduced efficiency, as well as some longer term problems.

Gas can come with a number of different additives that do many of the same things as those added to oil. Some will prevent acids from forming through condensation. Carburetors can become clogged over time, so some additives are designed to help clean them. Water in the fuel line can lead to rust or freezing damage, so some additives help water pass through the system harmlessly.

Some will also improve the performance of the engine. Octane improvers will slow down the burning of the fuel-air mixture in the cylinder. That allows the power generated to be used more effectively, and also reduces the wear on the engine itself. Higher octane fuels can lead to better performance and a cleaner engine, but are also usually more expensive.

Diesel powered engines don’t use spark plugs, as the heat generated by the piston compressing the air is enough to ignite the fuel. Fuel is injected at the moment the piston reaches the top of the cylinder and burns instantly. Because of the heat that is generated, diesel fuel has oil mixed into it as lubricant. Steel expands when hot, so diesel engines aren’t built with tolerances as close as gasoline engines. They’ll make more noise when they’re first started up and grow quieter as the engine heats up. Diesel engines have glow plugs that heat up the air in the cylinder so that the engine will start.

Gas is an obviously appealing power source, particularly when it’s a product of the well you’re pumping. Gas from the well will often contain a lot of water. This has to be removed from the gas before it can be used as fuel. When you’re using the gas directly from the well, you’ll need to pass it through a regulator, so that it’s at the correct pressure for your system. The gas can then be passed through a wash tank to remove water.
Water in the fuel system can freeze in cold weather. It will condense out of the gas and the collect in low points in the system, eventually blocking the line. Adding a small, custom modified tank to the system to collect the moisture can help prevent blockages, as long as the water is blown out of the tank regularly. 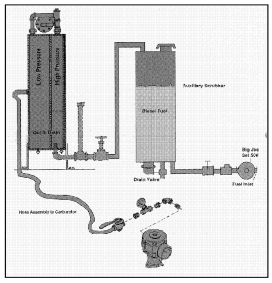 Figure 3. The layout of a natural gas fuel system, showing the flow from well to engine including all major components.  (courtesy Arrow Specialties, Co., Inc.)

In Figure 3, you can see an example layout of the system. A scrubber and tank may be needed when supplying an engine with gas. The scrubber will remove water, though if the gas supply is dry enough to be used as fuel you don’t need to add a scrubber to the system. The volume tank will keep the fuel supply steady and the pressure steady; 6 or 7 ounces of pressure is usually required.

Larger engines will have a greater fuel need, and so a second volume tank may be needed. The rise, the pipe projecting upward in Figure 3 between scrubber and volume tank, is used to prevent a sudden rise in pressure or amount of gas.

Ever had a look inside a Superior Gas Engine Pump House?