Elvis Has Left the Oil Patch

Okay GreaseBookers, I know that most of us love our dogs.

Since I have been in the oilfield, I have met only one person who did not like a dog in a pumping truck. It happens to be the man I pump for now – although unless there is a large rain (not likely where I live) I usually use my own pickup. There’s a story that goes with this…and you will hear it later in this blog.

The point is while there are many liabilities to being a pumper, including people thinking we just drive around taking meter readings and that we are fundamentally dumb, there is at least one benefit to the job aside from a decent paycheck. Many times the company allows us to take our dog with us pumping. 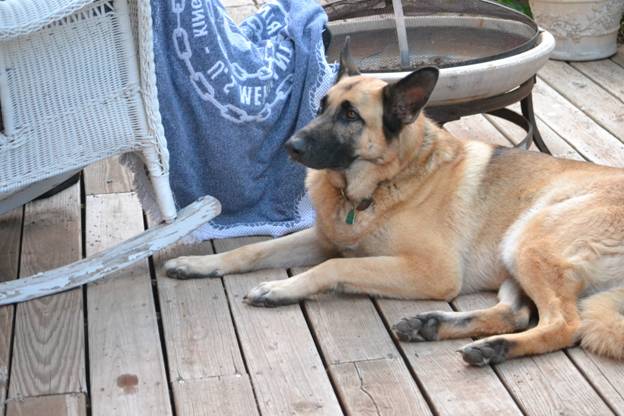 For me, this particular benefit fell into the top three benefits of the job as a full-time company pumper. I mean, let’s face it; where else can you go to work where you can take your best four-legged friend with you? Also, where else can you avoid having to work with people most of the day? But that’s another column isn’t it?

All that said, I learned in the first year of my life as a pumper working in Perryton for Chaparral Energy, this freedom to take my dog also held its liabilities. And I am not alone in that discovery. Most of my pumper friends who toted a dog along also discovered these problems.

My best friend, Evelyn discovered the hard way several times what it means to carry a pet along on the work day. And just a note here, in her 38 years in the oilfield she has been known to carry everything from a pet raccoon to a pet bobcat, two German Shepherds at separate times, a Pitbull cross, two Blue Heelers at separate times and now a ginormous Mastiff named Giget and a whiney, neurotic Blue Heeler named Norman who has an anxiety disorder.

I, on the other hand, had one pumping dog. Her name was Nipper. She was a Cairn Terrier and I soon began referring to her as a “terrierist” because she literally terrorized me at times.

Nipper liked to find long dead animals and eat them and then puke it all up into the console of my pickup. She also found a pile of fresh, human poo after a work-over rig had been on one of my wells and rolled in it.  People who don’t know what a Wheaten Cairn Terrier looks like, they have very long, blond hair.

So the day I allowed Nipper to ride with me in my current boss’s brand, spanking new pickup (about three years ago) I didn’t realize what kind of a day it was going to be. The whole reason I took his truck was that he was out of town on a vacation and the lease roads were muddy. My truck, Ol’ Greenie, doesn’t have four wheel drive, see. So sensing a good day, Nipper bailed into my Boss’ 2014 (with velour seats…I know…go figure).

Anyhoo, everything was fine but that particular route is really uppy-downy. Lots of hills. And so Nipper got sick and puked in the console and on the seats before I could say Jack Sprat. Before he came home I cleaned and cleaned. I felt that his pickup was better than when he bought it when I left it in his drive, ready for him to start his next working day.

He called me on the phone around 10 a.m. I answered, confident that he was just asking about his wells. “Hello?”

“I found a long, blond hair in this truck. Did you have your dog in here?”

“Well, the truth is, one of my best friends wanted to go and watch me pump and she has long, blond hair. I sure hope you don’t mind,” said I.

“Well, as long as they don’t get out at the well site,” he said.

Later that month, he took me to show me a couple of new wells he had acquired. He stared into my face. “What was your friend’s name?”

“The one who left the long hair in my truck.”

“I was biting my hand by now and I looked at him guiltily and nodded.”

“I knew it.” He just laughed and told me not to do it again.

Since then he’s purchased another new pickup. Oddly, I haven’t ever been in his pickups since. Even in the mud, he lets me take Greenie. Hmmmm. I wonder why?

GreaseBookers, this has been a tough year for everyone. In Northwestern Oklahoma, pumpers, farmers, residents – we have all struggled to push through not one but two disasters. First we had an epic ice storm that kept many well sites inoperable for more than one month and then we have had one of the single most devastating fires in history in my area. We have lost more than 1 million acres up here and easily over 1,000 cattle. There has also been damage to oilfield assets and again, the power has been affected. Ranchers have, in some cases, lost their entire businesses. It will be a tense and heartbreaking year ahead for these people.

So I felt I would write a little something that just took our minds off of the awfulness for a moment. And to that end, I decided writing about our love of living things seemed appropriate, given the tragedy we have suffered of late.

Those of us who haul our dogs with us pumping, know what a comfort they can be when the days get long.

But I digress. When I met my best friend Evelyn, she told me of some of her pet hauling disasters and yet for some reason I failed to take her seriously when I got into the business. I had to learn on my own I guess.

Principal among her animals was Elvis, her most beloved dog – a beautiful German Shepherd. In a flash one day Elvis chased a rabbit under the weights of a pumping unit and was badly injured when the weights came down and crushed his hip.

He lived through that accident though, with a combination of effort from me and Evelyn, each hauling him back and forth to the vet for treatment.

For several years after that Elvis trotted behind Evelyn everywhere she went on the location.

I took him with me a time or two and I can still hear the gentle thud, thud, thud of his feet falling in the dry Oklahoma dust behind me. And there was the cadence of his panting, huh, huh, huh, huh, right beside me as well, as I worked on my own locations.

For some reason, I never felt alone with him around. The other benefit of having Elvis around was that he was my dog Nipper’s only true friend. Nipper had some sort of mental disorder and she hated everyone but Elvis. In fact, Nipper was so in love with Elvis that when she would bolt from me and be running, totally out of control down the lease road after a coyote or rabbit, the only thing I could holler was “Elvis” to get her back. When she heard his name, she would come screeching to a halt and turn around and come back because she thought he must be here or I wouldn’t be calling him.

Just a note here, this only worked about three times before she realized what a liar I was.

Anyhoo, Elvis was like having a human being with you. He would look at you with his golden eyes and tilt his head when you talked to him. I expected him to say in English, “And then what happened?”

If Elvis wanted you to notice something he felt was important on the location, he would come over and place his huge front paw on your arm and pull at you to follow him.

But most notably, Elvis loved to play the game Hide-and-go-Seek. I’m not kidding.

This is how this went. I would set him down with his back to me somewhere and tell him to stay and I would go find a place to hide really well. Then I would call and tell him to find me. And he would look and look until he’d find me. When he did, he would be so excited and I would laugh that kind of laugh you only have when you are really having fun.

Elvis and Evelyn were inseparable. Since the loss of her husband Wayne in 2005, Elvis had become her helper – her confidant. He was whose furry neck she cried into when the people in Evelyn’s life had grown weary of her grieving for her husband of 24 years. Elvis understood, there is no real time limit for deep grief.

In the evenings, after a full day of seeing oil wells, Elvis was who would gladly run around in the house, playing Hide-and-go-Seek with her too. The two would put on a country music CD and Elvis, who was as tall as Evelyn when he stood on his hind legs, would stand up and the two would dance like crazy.

Elvis had a cat too. Her name was Savanna. Savannah slept literally in the leigh of Elvis’ neck, where his jaw met his neck.

It was Thanksgiving of 2013 and I was pumping wells but Evelyn had left to go see family. Earlier that day she told me Elvis wasn’t feeling good and would I go to her house and check on him . He had just thrown up a couple of times and while that didn’t seem too odd for dogs that sometimes eat myriad dead animals while working with us, it still concerned her.

When I got there, I could see right away, something was terribly wrong. Elvis was standing, leaning forward and could hardly move. He wouldn’t even look up at me. I could sit down, he couldn’t lay down. He was in misery.

I called her and told her, he had gotten much worse. She dropped what she was doing and made the nearly two hour drive back and rushed him to the vet.

The day after Thanksgiving, Elvis died. We are not sure what killed him and we will never know. We fear he might have gotten into someone’s garage and possibly drank some coolant.

He was so well loved that several people in the community came out for his little burial service. I brought his best friend, my dog Nipper who was pretty upset. She went to see her friend’s body and sat next to him and shook uncontrollably.  As much as I try, I can’t unsee that. Nipper was never the same after that. Something was just wrong with her and she ended up dying a year later.

And as we all said our goodbyes to Elvis that day, one thing was so clear.

The oilfield industry out here in the Panhandle was somehow indelibly changed that day and was the worse off for it.

Because, Elvis had left the oil patch.