Picking up from our last installment, you should now know that when it comes to our VOC emissions, “what gets measured gets managed”. Essentially, you should understand the importance of (1) how to measure your VOCs, (2) whether you fall under QuadO rules, and (3) what to do about it (if anything!) so that you can rest easy at night.

If you missed that post or just want a refresher, you can check it out by clicking here.

Are VRUs the answer?

Basically, the Vapor Recovery Unit takes non-product output (hydrocarbons that aren’t making you any money) off the top of your storage tanks, collects the gas, compresses it, then pushes it back to the sales line.

And, even though operators must keep an ever more watchful eye on the compliance of their facilities, there is still only one criteria you need to determine when contemplating to install a VRU. The simple question you must ask yourself is: “will it make me money?”

If installing a VRU doesn’t pay out, don’t install it. If it does, go for it. Just make sure you let the numbers make the decision for you.

But what you must understand, a VRU is not a control. It’s classified as a piece of “process equipment” (which basically means it’s not in the rule books). Basically, when we install a VRU system and collect these emissions, any emissions returned back to the sales line won’t count toward our annual total allowed by the EPA.

The Savvy Operator understands the benefit of returning emissions back to the salesline are threefold. First, you’ll be able to profit from these emissions. Second, you’ll be 100% in compliance with QuadO. And third, by “selling your emissions”, VRUs will drop your tanks below the 6 tonne threshold allowing you to drop out of the EPA system altogether. All in all a pretty sweet deal.

Over the past several years, VRUs have received quite a bad rap. A lot of people have gotten burned because they simply didn’t work (facilities with rich gas and liquids will cause VRUs not to work…) Even most VRU dealers will tell you it’s probably one of the most complicated pieces of equipment on site.

Understand, VRU systems are ‘closed systems’. They’re set to kick on under specific pressures in the tank or when they sense gas. Oklahoma & Texas both classify VRU systems as only 95% efficient.

Why do they fall short of a 100% solution? The reason OK & TX state that the VRUs are only 95% efficient is because the VRU will probably fall offline sometime during the year, and the States want to know what you’re doing with your gas when the unit is down…

That being said, if you can prove you’re sending that gas somewhere else (ex: a combust or or some sort of redundant system), you can make that VRU 100% compliant.

First rule of thumb for VRUs: don’t. go. cheap. There are different VRUs that serve different purposes. And, inexperienced installers will get you into trouble by not sloping lines correctly and accidentally trapping liquids which will cause your VRU to go offline.

What happens when that (p.o.s.) VRU goes down? You fall out of compliance, and you open yourself to being fined… exactly the sort of stuff we’re trying to avoid by installing a VRU in the first place!

The story generally goes like this: independent receives proposal for a $30K VRU unit. Instead, they go low-bid and spring for the $20K system. Eventually, the VRU shuts down, and the independent operator now finds itself out of compliance. What’s worse, the $10K that was saved could cost the company $100K+ in fines…

Basically, don’t buy cheap — that means no compressors from Home Depot. Get an expert. Better yet, get someone to train your field guys on the proper maintenance of the unit. Also, be damned sure they offer ongoing support (why? because you need someone who has replacement parts that can get out there and fix it in 24 hours… you can’t be offline any longer, it’s gotta be up and running…)

We realize this sounds like a lot of work, but a properly installed VRU can pay for itself in a very short amount of time.

Also, large operators take note, too: refinery spec VRUs are overkill. Many times, large independents will spend $250K on a unit when a $30K unit would put them exactly where they need to be. Standardized systems are all that’s required (from what we’ve put together, we’re recommending no custom VRUs, and no one-offs…)

Developed by Anadarko in the 1990s in the Giddings Austin Chalk Field, the VR tower netted Anadarko $7-8MM per year from 1993 to 1999 in gas sales and eliminated 99% of their headaches caused by compliance.

The VR tower is a new twist on an old industry standard: basically, it’s a glorified gun barrel. The VR tower is an atmospheric flash vessel, generally about 30 ft tall, 36 inches in diameter, with a capital cost of about $30,000. Now remember, 90% of our gas breaks out during flash. From your heater treater or low pressure separator, you bring in your crude, it splashes — boom! (kinetic energy) — and you get your flash. 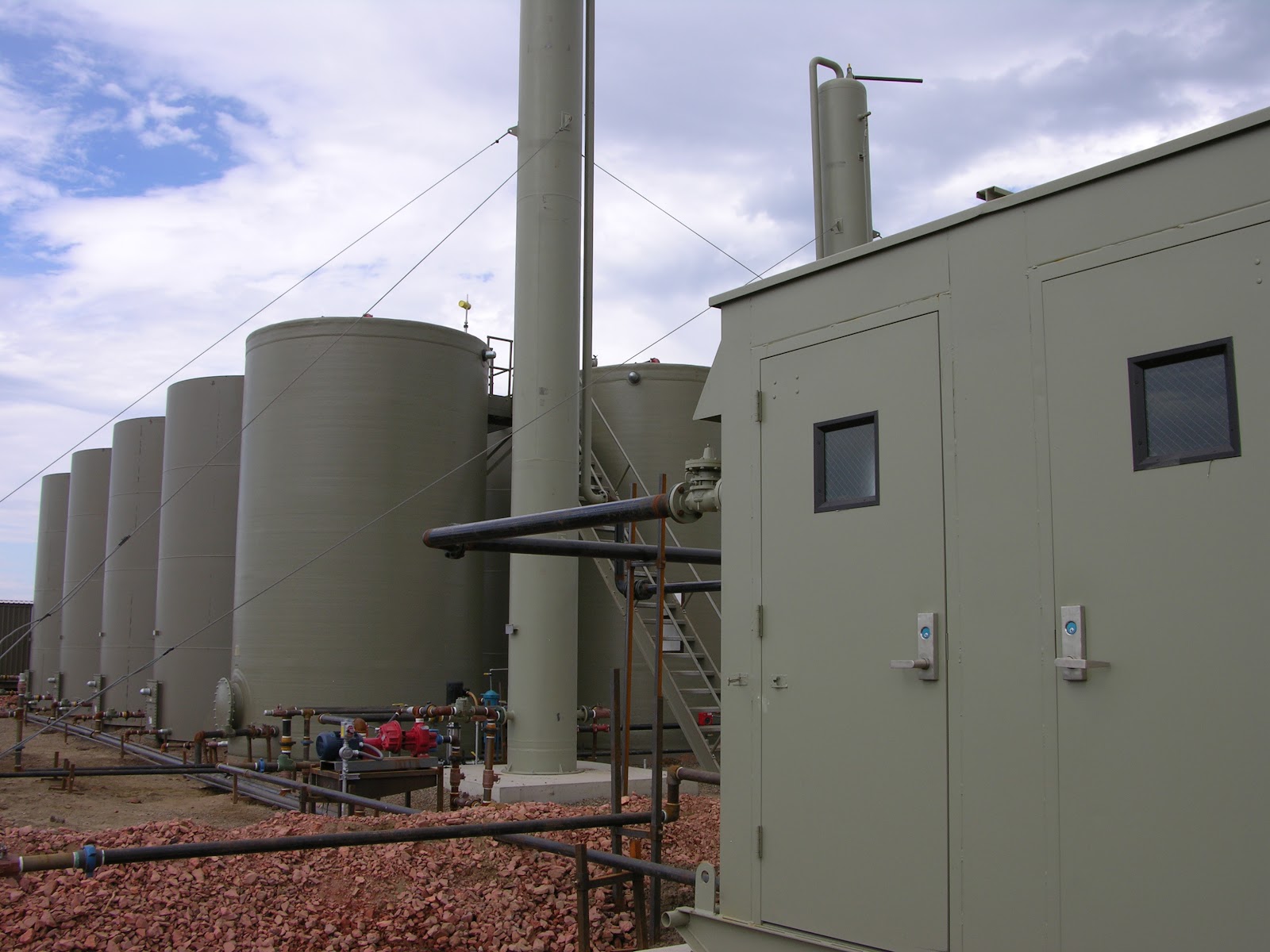 However, in a VR tower, not only does crude drop 30 feet (that’s some serious flash!), but you also have a 10 ft of vapor headspace. There is a liquid seal — this means there’s no way to ever get oxygen to your sales line. All the gas and live oil is turned to dead oil, and your stock turns to dead stock.

What’s more, is that when you open that lid to take a gauge measurement, you don’t get that ‘whoosh!’ of gas anymore — it’s all been broken out in the VRU tower. That being said, it’ll save you from worry of being fined because a purchaser or pumper accidentally leaving a thief hatch open. So, when oil falls from 50psi to about 5 psi in the VRU, it completely switches the compliance equation to benefit the operator. Your tanks no longer fall under Quad0, and you now drop out of the EPA’s system!!

Towers are (relatively) cheap. In fact, some consultants think it’s the future of the oil & gas industry. Basically, instead of having a heater treater and separator dumping straight into a tank, oil will flow through a flash vessel / VRU tower first.

Remember, the more headspace you have (i.e. the taller the tower), the better. Essentially, it’s a cheap way to comply with the rules… everybody wins: you, the EPA, and the environment.

Again, this isn’t for those stripper wells, it for those higher volume wells producing 50-100 bbls a day w/ a lot of gas flashing off.

Side Note: We’ve heard Chesapeake is starting to install these towers. They’re flaring off the top, and using this method as a very effective means of reducing the gas coming off their tanks.

What’s that you say? You’re nowhere near the size of Chesapeake? While you may not be able to afford a VR tower at every site, we always encourage the idea of ‘plug-and-play’ equipment. A VR tower only be economical during the first few months of flush production. That being said, over the lifecycle of a well, you’re going to need 2-3 different types of VRU units. That’s why we so strongly discourage ‘one offs’ customized to each site and promote the idea of moveable, skid mounted equipment.

Essentially, the idea is as soon as one well starts to fall off (and you bring another one on), you shift this equipment around. Mounting your VRUs and combustors on skids lowers your CAPEX, and enables you to use the right tool for the job.

Think about it: this doesn’t just apply to your VRUs and combustors… the idea is just as easily transferable to expensive sensors and SCADA equipment. There are many different camps of thought around the use of SCADA and at what level of production is necessary to justify the costs. Although technologies like remote operations and SCADA have sought to address productivity and efficiency issues, many independent operators are of the mindset that a mature well is going to produce what it is going to produce regardless of whether its production is monitored or not.

Even in the case of high-flow wells, most operators require that their pumpers visit these sites several times a day, trumping some of the potential benefits a wireless monitoring device may tout… but I digress, we’ve written about oil well monitoring with a smartphone app a lot, even in an article published by E&P Magazine which you can check out here:

Ever been in the field before? (ok ok dumb question) Ever smelled gas before? We thought so. Usually, that means you’re crossing a gas trail. The interesting things about VOCs is that they generally don’t disperse; they often hang tight and travel along a specific trail. These gas trails will travel along 4-5 miles crossing highways, fence lines, and backyards.

Like in every other aspect of the oilfield, technology is changing. Infrared cameras used to detect emissions are now old technology. Yes, it came from the military. Yes, it’s $100k per camera. But, they’re labor intensive and fail to find many of the leaks.

New tech to detect emissions is now commercially available. In fact, many folks are talking about these new emissions sensors being attached to fixed wing aircraft or drones. When combined with meteorological instrumentation and sophisticated software, these technologies can detect methane plumes and quantify emission rates from your tanks — all from authorities sitting inside a parked van controlling the drone.

Drone from the movie Terminator 3: Rise of the Machines

And, while these technologies aren’t quite ready for prime time, the fear they incite may be used by your local VRU dealer to conjure up a few early sales ;-P

Looks like we’ve got two choices: (1) open season on drones, or (2) get compliant. Understand, a new playing field is quickly evolving. Rest assured that the EPA will be checking it’s list, checking it twice… gonna find out who’s. . .

Got something to add in the comments below? If so, post it!! Other independents like you wanna hear it!