Oklahoma City, OK — GreaseBook, developers of a mobile oilfield app by the same name, announced today they are expanding their field-ready mobile capabilities to another device with the introduction of the first-ever native GreaseBook Android app.

The GreaseBook Summer ‘17 release comes fresh off the heels of the company announcing it had just rolled the 35MM barrel mark— since the company’s inception a short 4 years ago, America’s independents have scrolled, swiped, and tapped more than 35 million barrels into the modest field production app.

GreaseBook now boasts that its trailblazing mobile solution is now being leveraged by more than 100 Operators and 1000 Pumpers, including several of the nation’s top 100 largest producers.

Like the GreaseBook iPad app, the new GreaseBook for Android phones and tablets offers a complete end-to-end oilfield production reporting solution that fits conveniently in your Pumper’s pocket.

And, while many legacy software solutions are one-way communication tools from field to office, GreaseBook gives the Operator’s pumpers feedback at the well site by granting them access all historical commentary, production graphs, and well history while in the field.  The GreaseBook even goes as far as to grant Pumpers the flexibility to work offline in low or no-connection areas.

“With the native Android app from GreaseBook, not only will the Pumpers have all the capabilities they need to keep those production updates moving from field to office, but they’ll also have access to things like perf depths, the last time a well was worked over, and access to all historical notes made by any other member on the Operator’s team who has ever set foot on the lease.” said Greg Archbald, Founder and CEO of GreaseBook.

Once the Pumper has submitted his data to the GreaseBook system, it’s automatically compiled and sends out scheduled, automated in-house, State, and investor reports enabling operators to significantly reduce the amount of labor required to gather (or chase down – ahem!) production information and field tickets if not reduce operating overhead by a full step improvement.

“Being “field-ready” means making sure that not only in-house team members like admin, production engineers, and field sups have the data they need when they need it, but by also granting this info to the Pumper you’d be amazed by how many of these guys and gals are able to further engage and rock those wells. And that’s essentially what we’re delivering with the GreaseBook – not only offloading much of the production reporting work on the Pumper but also giving them the information with which to reduce oversight and better engage your wells,” said Ryan Gillette, development consultant for GreaseBook. “With the introduction of our Android smartphone and tablet apps, in addition to our native iOS app for iPad, we are working toward giving operators the ability to enter and review production on any device, which means employees not only get to work with the personal devices they’re already familiar with but also lower the Operator’s buy-in because they’re not required to purchase devices or laptops for their employees.”

High off it’s recent release, GreaseBook Founder Greg Archbald closed by stating, “GreaseBook has a funny way of making Operators think for a moment – realizing that in comparison the GreaseBook app simply makes sense. Many Operators spend tens if not hundreds of thousands of dollars each year on brain-dead, ineffective Band-Aid approaches to solving what’s become a broken, mission-critical process. Trust is built on credibility, and pricing the solution low “because we can” is a remarkable statement. We see the company-customer relationship as a partnership – we don’t gouge the Operator. We want the product to help the Operator. We want to make clear to everyone involved in oil & gas that a technology shift is under way here, and that old solutions simply cannot hope to keep up.”

For more information about GreaseBook and how its app may be a fit for your company, check out www.greasebook.com or schedule a demo here.

Since GreaseBook’s inception a short 4 years ago, America’s independents have scrolled, swiped, and tapped more than 35 million barrels into the modest field production app. 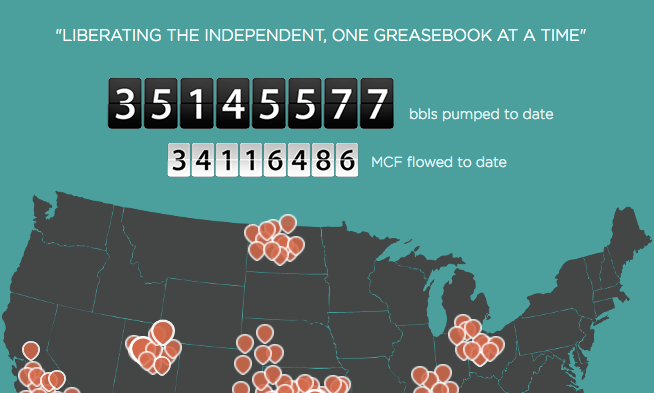 Instead of pushing paper, manipulating spreadsheets, or fighting some ‘legacy system’, these folks were able to focus on what they do best: Pumping Oil.

For us – well, we feel a great sense of pride and responsibility.

Responsibility, because so many independent operators have entrusted their production to the folks here at GreaseBook.

You see, something very interesting is happening… a surge of new methodology, ideas, human reason, and logic.

And, it’s not coming from the top down (the large, integrated operators), but from the bottom up.

A single pumper shifts from paper to mobile. An admin back at HQ realizes she no longer has to make telephone calls to remind the pumper to ‘get his data in’.

Eventually, engineers and production supervisors start clamoring because they actually have data and graphs that make sense. The band wagon increases in size.

The things that mobile is doing are valuable and positive… it creates proactive pumpers, it alleviates minutiae from the back-office, and keeps engineers and supervisors focused on the task at hand (maximizing oil production & minimizing overhead).

And the best part?

People actually want to use this stuff.

Folks, there is no stopping this groundswell – it’s replacing processes that were forced on the field just a decade ago.