Okay, so every time I go out to see my friend Renee Cudd, I know where I will find her. She will be riding around in her golf cart on her ranch in Woodward, Oklahoma overseeing and managing the vast quarter horse ranch she and her late husband built together. She is beautiful, my friend, Renee…

She is probably in her late 50s or early 60s, stays in shape and keeps her platinum blond hair tied up in a stylish knot on top of her head. She wears a classy button-up white cotton shirt and jeans.

And while she is now the force that carries on a legacy her husband left behind, she doesn’t yet seem to know how amazing she is.

You see, Renee’s husband was the quintessential example of someone who looked up at everything he did and followed his desire with a common sense approach. He took in what was happening around him, made a good judgement about it and then followed that with action. It’s a quality all too scarce these days.

Truth is, it not only made him a fortune in the oil industry, it turned his name into an icon that screams confidence at an almost John Wayne-ish level.

But for him, that wasn’t the point, right. For him, the whole exercise was to allow him create a life for himself and Renee that was comfortable and allowed them to do the kinds of things they both loved so much – buy, breed and sell some of the best Quarter Horses in the world.

This week, Greasebook.com proudly presents “Legacy” a story about an oil field icon who approached the industry with an astounding level of good judgement and common sense – just like the Lease Pumper’s Handbook says you should.

And Greasebookers, do not miss this. Because this thing…this journey you will take reading this blog is not work. Absolutely no way is this work.

You could be skiing down the black slopes of Jackson Hole Wyoming with the cold wind in your face, heading straight for the lodge where a hot-toddy of your choice and your best friends await you around a fireplace and you would not be as far away from working as you are right now, reading Greasebook’s Wench with a Wrench.

We have been taking a walk every two weeks through the Lease Pumper’s Handbook and I’m offering you a little real world example of how some of these very salient concepts that you can find in the handbook, can be applied. This week, I began reading Chapter 3, Safety.

The first section of this chapter is called “Good Judgement and Common Sense” and frankly, the first person I thought about was my friend’s Husband.

“The lease pumper never takes dangerous chances unless the event is already in motion,” this section notes.

Boring right? Everyone knows that, right? And yet EVERYONE ignores it. We see what we think are tough guys and we think, they can do that…so can I.

Not so much when you consider that my friend’s husband performed the most dangerous of work in the oil industry and came home alive to enjoy his life with his closest friend and business partner, his wife.

Did I mention that my friend Renee’s husband was the Iconic Bobby Joe Cudd of Cudd Pressure Controls. Maybe you have heard of him? Of course you have. He was one of the men who was one of the foundation characters for John Wayne’s character in the movie “Hellfighters”. 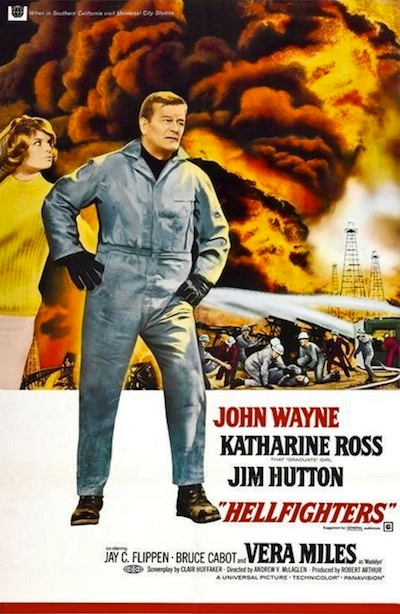 Bobby Joe Cudd was born in 1931 in Bradley, Oklahoma. He died in 2005 at 75-year-old. He had been working in the oilfield since shortly after he graduated. It was a choice he made as a new high school graduate after he took a long and hard look at what he was doing for work cutting broom corn for local farmers in his area. He never looked back.

The fact is, I thought of Bobby Joe Cudd when I read because through his more than 50 years in the oil industry he seemed to be one of the few who defined the industry rather than it defining him. He left a mark – a mark of someone with incredibly good judgement and common sense and not because he never allowed himself to perform dangerous functions but because he did so with amazingly good judgement and common sense.

Bobby Joe started out on drilling rigs, where every oil field worker used to start. He learned early that there are times when you have to take action quickly and perform dangerous functions, but he was sober, alert and intentional about what he was doing. He wasn’t on a cell phone while climbing a tank. In short in every second of every minute of every hour of every day, he was intentionally exercising good judgement and common sense. I am not just saying this crap. I know it to be true.

But that was never really his attitude, according to his wife and the many men I have interviewed who knew him. He was firm and honest with his men and the people he talked to. He had no swagger. He had no hero complex. His wife said he just had this calming, fluid and very humble way about reminding people that they were here for a reason and to remain focused on what that reason is so that when you get to the end of your life, you can say you left something of yourself behind that in some way made the world all the richer for you being here.

It was the foundation upon which he and his men fought and brought under control 250 of the 750 oil field fires of Kuwait in 1991. It was the very bedrock of his establishment of Cudd Pressure Control Company of Woodward, Oklahoma in 1977. And it was the wisdom he used even when getting on one of his many Quarter Horses to go for a ride with his wife Renee.

In a March 2001 story written four years before he died, he was talking to a reporter who obviously was having a moment of hero worship. He was quoted as saying, “In the movie, it looks like everyone is trying to kill themselves,” he said. “The objective is not to kill yourself but control the well.”

Talk to anyone who served in the oil field anywhere in the world from Iraq, to Kuwait to Uzebekisan and they will tell you that Bobby Joe Cudd didn’t just follow those concepts of good judgement and common sense, he embodied them.

He left a legacy behind for those who care enough to research him. But after years of talking to his wife I have become aware of one more legacy he left and it is Renee. Ever a student of her husband’s insight, she told me of his last words to her before he died in 2005. He knew Renee was going to be left to carry on a company for him that was now pulling in $100 million per year with offices all over the world.

“He told me, ‘Renee, you have to be strong.” It seems a simple statement. But I think it’s clear that he’s really talking about being intentional. About setting your mind on something and resisting the temptation to let your mind wander. He was telling her there is never a moment in the oil field when she can take a break from exercising good judgement and common sense.

In the years following his death, Renee did not lose her drive. Despite her intense grief over the loss of her best friend, she picked up his mantle and never put it back down.