Okay so, literally 10 minutes before I got to my first oil well on Christmas day, the weather was a balmy 64 degrees and things, while cloudy, looked pretty muchly okay.

I had a weather report that sort of hinted otherwise. but who believes them anymore? Not me.

However, I should have listened. Because, like a scene out of “The Mummy”, a wall of rain and wind approached me from the front as I tootled down the highway to the Baker 1-9.

This storm was like an Oklahoma hurricane. I’ve never seen the likes of it. The storm wall hit my pickup with winds well in excess of 50 to 60 miles per hour. Something brown, like an animal or bird got caught up in the wind and hit the right front fender of Greenie, my trusty 1993 Ford F-150 pumping truck. I have no idea what it was. I only hope it wasn’t someone’s little brown dog because it’d be awful to kill someone’s little brown dog on Christmas day.

I literally could not see the hood of the truck for a few moments and pumped my brakes a little and tried to pull over, out of the way of any ginormous 18-wheelers that might be behind me. 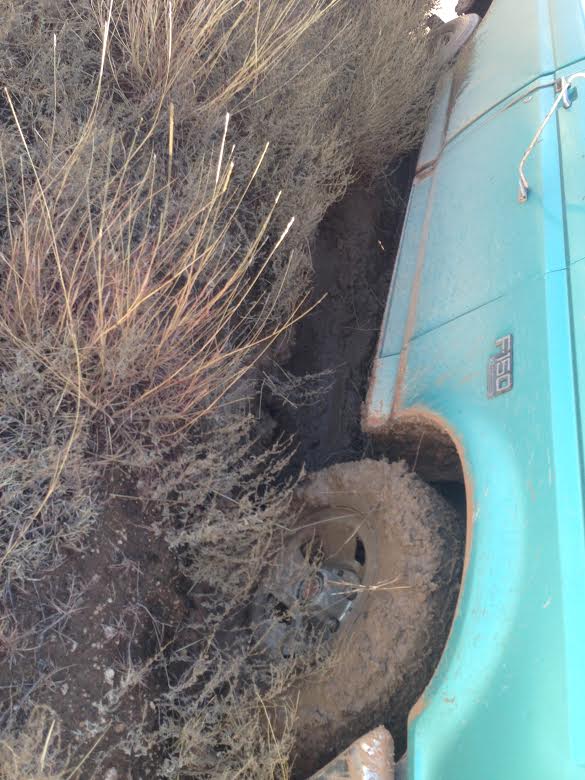 In 30 minutes, the whole storm was over. In that short time, water completed filled the deep ditches in the town I was driving through. My less than magical Christmas day of pumping wells was just starting.

And just about an hour later, it looked like it would be even more less than magical right about the time I got stuck at my fifth well of the day.

And can I just say, I was really stuck. This was not the spin-your-tires-enough-to-smell-rubber-or-your-clutch-burning-and-get-out-of-it kind of bad. This was the, I’m buried and someone’s going to have to come get me, type of bad.

Which brings me back to the safety portion (Chapter Three) of The Lease Pumper’s Handbook.

Look, there are two types of pumpers; those who have been stuck in the mud or snow and those who will be. This was my second time being stuck in the mud. The other time, I happened to know a kindly farmer in the area and he came and dragged me out of there backwards by my hitch. It’s probably wise to keep good relationships between you and the area ranchers and farmers for these reasons.

Here’s another important note; get yourself a proper tow rope. Just do it.

You will thank me. Chains are for people who want to implant a link of chain into their face or skull. A tow rope has enough flex and when or if it breaks, it won’t fly at better than 90 miles per hour through your windshield and take you out.  Just sayin’. Do it. Don’t put it off.

The ropes like I use cost about $130 but think of it as a savings of $6,000 you would have spent in the emergency room getting your scalp sewn back on.

So there I was, Christmas day, feeling the incredibly rough wind pounding my truck and just sitting there, whilst trying to get over my anger at my situation.

Usually at these times, I am pretty good at just accepting my situation and allowing things to play out. I mean, at least I wasn’t buried in a six foot drift of snow, five miles into a seven section ranch with no cell phone signal. Because…uh…I’ve already done that one. (It took six days to get my pickup out of that drift. It was literally covered all the way with snow during the winter of 2012.)

So, I called a friend and asked him if he can come give me a tug out of this mess. I didn’t want to call the man I work for because, well, then what good is it to have me pumping his wells on Christmas day if he has to come rescue me?

I pictured him there, all warm and happy, sipping coffee while his grandchildren opened presents.

But my friend couldn’t help because did not have a hitch receiver yet on his new pickup and so I ended up having to call my boss. Not what I had planned. But Okay.

I was trying to surrender to what WAS instead of using my energy to be madder than hell. Now I needed to accept the situation, overcome it and use my energy to plan my day a bit differently so I could get in before dark.

I used my time alone waiting to FaceTime my daughter and her husband in California. I got a hold of them and watched as my granddaughter opened a Christmas gift. It was a great opportunity for me to slow my thoughts and realize that life is NOW and I had better make sure I found some way to enjoy my moments, even when they aren’t what I had originally planned or were full of aggravating and frustrating things.

Seeing my granddaughter tear into Christmas packages calmed me and reminded me of why I do all this – working extra on weekends and holidays. I smiled and caught my reflection in the rear-view mirror of my pickup.

I looked stupid, but I was much happier.

I say all of that to express this; the oilfield is quite possibly, besides the war zone, the single most unpredictable business in which I have ever worked. It takes just one, tiny thing – like a frozen Meko or a broken ball valve – and then like a nightmare of dominoes, everything comes crashing behind it. And that’s just one well. Spend two hours at one well and now you are behind for every other well you intend to see.

Off in the Oklahoma Panhandle, across that sandy horizon, I could see a little spiral of dust. I was miles into a ranch, but I knew I was getting out soon. By then, it was around noon. I needed gas and I was anxious to get out. We affixed the tow rope onto the back of my hitch and one little tug and I was out of there.

Of course, as fate often conspires, the rest of my compressors were also down because of the storm and so it was nearly dark when I finally drove into my yard after a long Christmas day in the oil patch.

After feeding my animals, I sat back on the porch and sipped a glass of wine and looked at the mud on Greenie. It was a hard day. But the work out there on those wells, listening to the pop, pop, pop, pop of an Ajax and looking for Santa Clause, was hard but refreshing.

The sleep after a day like that; Well, it sure is sweet.