This week, after spending the last four weeks working with my fellow Oklahoma Panhandlers as we all try to recover from the fires that devastated us here, I wanted to talk about human connection and how that connection to others and other “beings” impacts all of us, even those of us who like to think we tough oil field guys.

So this week, hunker down in your pumpin’ truck with your cell phone over lunch and join us for “At the well”; stories from several pumpers who have met some out of the ordinary creatures as well as people they likely wouldn’t have met in any other location.

Meet Panhandle contract pumper Brent Stahlman. He’s been a pumper for well over 20 years now. While the job of pumpers, especially contract pumpers can be rather solitary, Stahlman tells of us two meetings that took place at well sites that will endure in his memory forever.

“Well, there was a rancher I knew who owned cattle on the land that this well was on,” Stahlman said. “one day, my daughter Lindsey had gone with me and we had found this orphan calf. Well, we called this guy and he told us he didn’t have time to take care of an orphan calf and so he gave that calf to Lindsey.”

That meeting happened about a week before Stahlman said he ran into the man once again when he turned into the well location.

“I sat and visited with this guy who, other than the week before, I had not seen in a long time. I used to go to school with him,” he said. “We ended up visiting for about two hours that day.”

It was just a rare chance to catch up with a friend on a day when the weather was just right for leaning against a pickup and talking about all kinds of things.

“Then I found out that two weeks later he committed suicide,” Stahlman said. “It was just unbelievable that I could set and visit with someone and I could not know that he had problems like that. It just makes you think, how did I miss that?”

For Stahlman, the memory of that day the two men talked and laughed about old times together still haunts him. He plays the conversation back in his mind, searching for clues, much like a war-time code-breaker, looking for the code hidden within his friend’s conversation that day. If he had just been able to decipher the code at that moment,  maybe it could have allowed him to help his friend.

But no matter how much he does this, no code emerges. No secret messages pop out from the conversation that is now six years old. And it leaves him feeling a kind of helplessness that defies description.

These days, Stahlman admits, he tries harder to make real connections and he also says this friend, who had obviously been in so much pain, also changed his rigid, black and white thinking regarding what it means spiritually when someone takes their own life.

“Before, I had always looked at suicide as an extremely selfish….but he wasn’t a selfish guy. And the way I was raised, I was always taught that committing suicide was an automatic ticket to Hell,” he said. “Then this happened and you think, what causes that? What kind of Hell must they already be feeling? And then you find out later that there was a lot of family history of that and it gives you pause. And  then you just know, it can be genetic just like cancer.”

That last talk with his friend in the two weeks preceding his death with a pumping unit chug, chug, chugging in the background, changed Stahlman forever. He has given up the idea that he thinks he knows God’s mind regarding suicide. And he realizes that sometimes, there is something a little more important than getting to the next well.

“You know, I don’t pump that well anymore. But I drive by it every day and each time I drive by it, I think about him.”

Thank you Brent Stahlman for being courageous enough to share that story with us.

By the way, when Brent and I were talking about this story, he added a fun story of another encounter he had at one of his wells that I felt compelled to share.

It was a dark and not-so-stormy-night

Like most contract pumpers, Stahlman has a level of flexibility that allows him to, every once in a while, pause his day and do something with the family. On this particular day, he went to Oklahoma City with his lovely wife Ginger.

They went shopping, which makes me wonder why a man would allow his wife to take him shopping. But Ginger is a pretty fun gal. So it could be that he really enjoys just shopping with his wife…anything’s possible.

So when they returned, it was late. And like any pumper worth his salt, he got out and pumped his wells.

“So I came back and by the time I started checking wells, it was pitch black,” he said. “So here I was, in the middle of nowhere, completely alone down on the Beaver River.”

He said he got out of the pickup and there was no moon.

He found his way to his meter house to get some readings. He had opened the door on the meter house and was juggling a small flashlight and a pen while writing down the numbers, when all of a sudden;

“Someone grabbed the back of my shirt,” he said. “I jumped so bad that I tripped and fell over on my back and when I did I shined my flashlight up at what had just grabbed me.”

Turns out, the monster that had grabbed the back of Stahlman’s shirt was a giant goat. he said the goat looked at him with an expression that said, “What? Was I wrong to do that?” 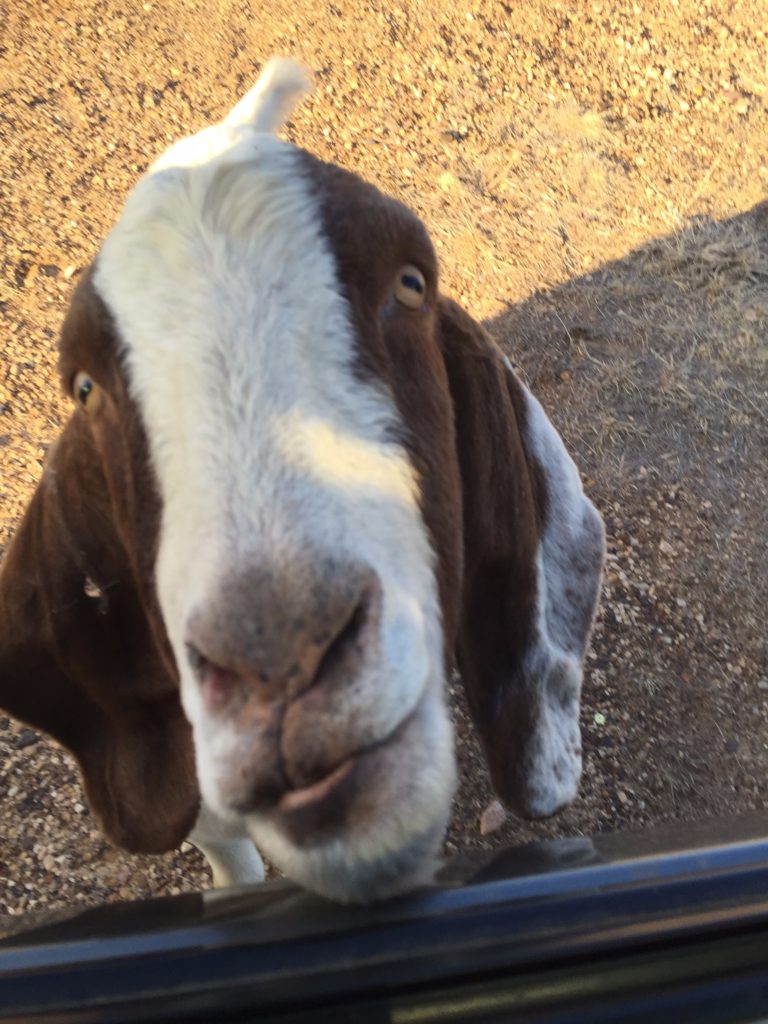 “I had noticed, when I would go to that well, that I was having trouble with something that was chewing the wires,” he said. “I had never seen him though and it was a huge pasture and so I assumed it was calves.”

Now days the two are friends. When Stahlman heads down to the well, he looks for the old show goat, who he now knows is living out his days in that meadow.

And every time he sees the old goat, he scrubs his old gnarly head with his hands and reminds him how lucky he was that on that night after the shopping trip, he had not worn his pistol.

Panhandle Oil and gas pumper Donnie Crigler is a manly man. No really…this is a guy who is like 6 foot 3 inches of growly bear manliness and no one can really know anything else other than that about him. He forbids it.

Donnie was a fellow pumper and until perhaps today, after he reads this, was a good friend over the years. But I have to share his story. It’s too good.

When I started pumping at the same company as he did and he finally decided that I might not be such a bad old gal, he told me a story.

You see, when Donnie began in the oil field, he had a mentor – another big, strapping guy who was an experienced pumper by the name of Mark.

Over the years, Mark helped Donnie with every kind of problem that developed on his wells. We all know that sometimes the best way to figure out what is ailing a well is to bounce our ideas off of another person who can see, in their mind’s eye, what we are looking at.

That’s the kind of friendship that developed between these two. It was a friendship born of clogged bleed tubes on constant bleed dumps, swamped separators and compressors that wouldn’t run in the cold. It was two friend pumpers who worked shoulder to shoulder with a 36 inch pipe wrench, pulling off a Kimray. It was cussing Field Direct because that program won’t let you show negative oil when you have a stock tank leakage that drains a foot of product.

But one thing Mark was always telling Donnie was to “slow down”.

“And then, as a joke, I would speed up,” Donnie said laughing.

We all know that in the oilfield, slow is fast. If you are focused on what you are doing, you spend less time at your site and you are safer.

I may be wrong, but I got the feeling that this calm-minded guy would say it in a really slow way. I didn’t know Mark, but I can almost see him, moving his hand in a downward motion while he says it.

And then one day, Mark wasn’t there anymore.

“It was on a Thursday and I was off when he had his heart attack,” Donnie said. “The day before we had worked and he was there and the next day, he was gone.”

For anyone who has ever worked with a good pumper, you know what a loss that is. Working in the oil field is lonely for a lot of reasons. But one of the reasons is because it is damn hard to find a friend who you can trust. Like it or not, this industry can be full of a lot of people who cannot be trusted. So when you find one, you truly have struck real gold.

Over that weekend, Donnie said he couldn’t get Mark off his mind. He said he had gone to sleep on Saturday night and something had woken him up.

That’s when he said he saw Mark standing in front of him.

Donnie told me this story about five years ago. And he said that Mark said only one thing during that spirit visit.

And then, he was gone.