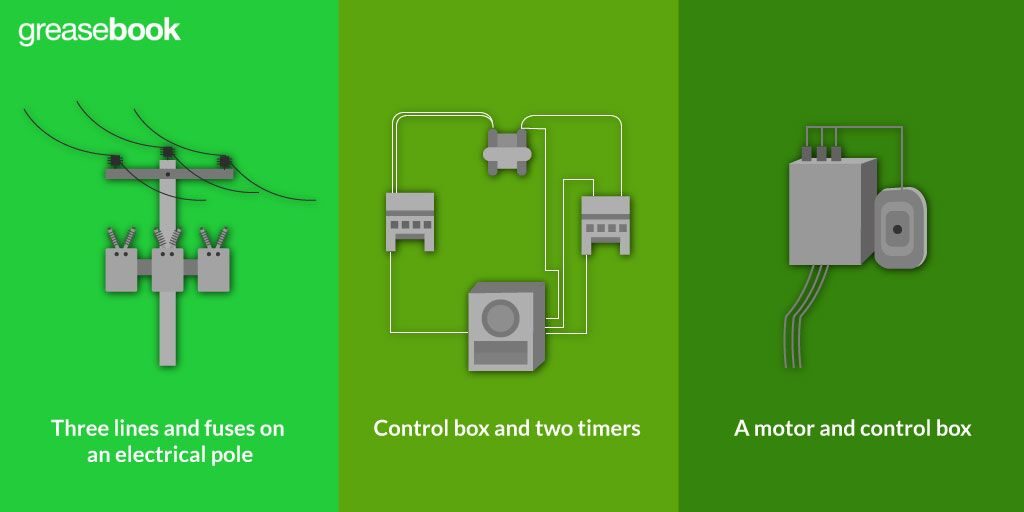 Electrical power can either be direct current (DC) or alternating current (AC). With direct current, electricity flows one way consistently in a circuit. With alternating current, the flow of the electricity changes directions. How often the direction changes is the cycle rate, which in the US is 60 cycles per second. Other countries may have other cycle rates. It’s important to use both the correct type (DC vs. AC) and the correct cycle electricity for each piece of equipment.

Likewise, it’s important to use the correct voltage for a particular piece of equipment. Most household electrical systems are at 110 volts, with some bigger appliances like washers and driers drawing 220 volts. Larger equipment on a pumping lease may use as much as 440 volts. Using the incorrect voltage, cycle, or using DC power when you should be using AC, can all damage equipment, sometimes in dangerous ways. The electrical plugs for some equipment, and electrical outlets, will often have a different arrangement to prevent the use of an incorrect electrical supply.

Electricity will most likely not arrive at the lease site at the correct voltage, as electricity is transmitted long distances at several thousand volts. That’s obviously way too much for any equipment on the lease. Electricity in long distance lines is also three-phase (which has to do with the construction of the wire), while electricity will need to be single phase to be used on the lease. The voltage and phase will need to be changed using a transformer. The amperage, or amount of work the electricity can do, will be stepped up in a direct relationship to the stepping down of the voltage. The transformer will usually be on a power pole, and hooked directly into the lease electrical system.

The lease electrical system is really part of a larger electrical grid, starting with generators operated by the power company, and then sent to consumers through electrical lines. Though a pumping operation may use more electricity than a home, it’s still a small portion of the overall electrical grid. If you ever lose power on the lease, you’ll most likely need to contact the power company to let them know.

Electricity is distributed around the lease by electrical lines. Most leases will use a three overhead electrical lines, though a four line system is also used for some operations. Lines are run using electrical poles and fuses and any transformers that are needed. 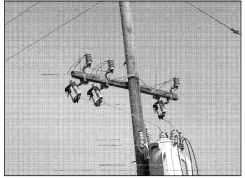 Figure 1. Three lines and fuses on an electrical pole. 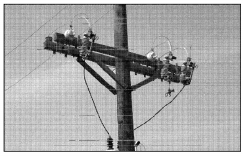 Figure 2. The second fuse from the right has been tripped.

There are three fuses on the pole for the three lines (with a four line system needing four fuses). The fuses are spring loaded so that it will fall when tripped, and can be easily seen. Examples of the fuses can be seen in Figures 1 and 2. In Figure 1, 3 functioning fuses can be seen. In Figure 2, you can see that one of the fuses has been tripped. When a fuse is tripped, you should shut in any equipment that is powered by that line. A blown fuse means a problem with the flow that could lead to damaged equipment. Contacting the power company should be your next step. They usually understand that power loss is a major problem and will act quickly.

One of the chief uses of the electrical system is powering automation systems on the lease site. This is particularly true of larger operations that depend to a greater extent on computer control. For smaller operations, automation usually consists of a control box with timers and fuses.

For safety reasons, high electrical lines should drop to ground level and be run underground. A safe distance outside the well servicing area, the line should run down the pole to a fuse box with a disconnect lever that can electrically isolate the site. The line continues down and is buried in galvanized conduit and run to where it’s needed on the site. Electricity is routed through a control box before being sent to equipment.

In Figure 3, you can see a control box near the upper right. Electricity comes up from the bottom, flows toward the upper right where the control switch is located. The three round tubes at the front and on the lower half of the box are equipment fuses. Above them is a breaker arm, which can electrically isolate the equipment the box controls if there needs to be maintenance. There’s a wire to ground the box, as well, in case of lightning strikes or other surges. Wires hook the electrical supply to a small transformer which changes the electricity to 110 volts, and from there it powers the control switch.

The switch can be set manually to on or off, or to automatic to follow a schedule preset on a timer clock. The clock has three fuses. It also connects to a power motor, which will start equipment at times the clock is set. When that period ends, power is shut off.
The control box will have a few fuses and a reset button, both of which protect it against heat and electrical surges. It’s usually possible, with some basic knowledge, to solve the majority of problems you run into. 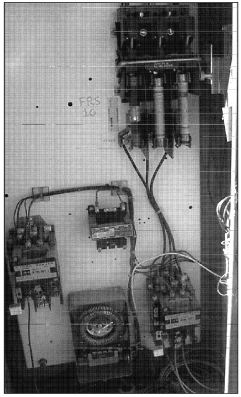 Timers can be divided into two broad types. The time clock is mounted in a metal box about six inches wide by ten inches high and three inches deep. Rather than having a standard, analogue 12 hour face, it shows 24 divisions of one hour. Half the clock is white to indicate day, and half black to indicate night. For most timers of this sort, the day is divided into 15 minutes chunks when the equipment is either on or off. Depending on your needs and the wells production volumes, you can set the timer to run equipment at different times of the day.

A percentage timer works a little bit differently. Rather than running the equipment at specific times of the day, it will turn it on at certain times so it will run a percentage of the whole day. A timer will run for a particular period, usually between 15 minutes and an hour. You can then set the timer to turn things on for a percentage of that period. For example, a timer set to run 33% of the time on a 15 minute timer will turn equipment on for 5 minutes out of every 15.

Like other electrically equipment, electric motors usually need to be provided with a voltage of 110, 220, or 440. Depending on the size and operating specifications of the motor, they might run at 1100, 1400 or 1725 rpm, though motors have a wide range of speeds. 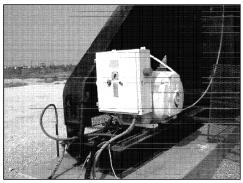 Figure 4. An example of a motor and control box. The motor can be wired to run at three different speeds.

An electric motor for a pump will normally have three groups of three wires connecting to the electrical system. Each group will be attached to a single wire from the control box. The direction the motor runs can be changed by switching two of the wire groups. The motor will have a plate on it which indicates how to hook up the motor.

There are motors that can be hooked up to either 220 or 440 volts. The plate with instructions will indicate if that’s the case, and how to wire the motor for each option.

Electricity is obviously useful, but it can also be dangerous if it’s not handled with caution. Safety procedures as well as good worksite habits are essential. Most often at a pumping well, you’re working by yourself, so it’s important to take responsibility for your own welfare. You’re going to have to replace tripped fuses, perform basic maintenance, and even due some simple rewiring if needed. There’s a few general rules which should be followed in every situation. Make sure that you’re always shutting off and isolating any electrical system from the power supply before you begin working on it. Where insulated gloves when handling electrical lines. Know what you’re doing before you start, and take a conservative attitude when it comes to risky situations.

One of the chief considerations when setting up your electrical system is the cost, both of assembling the system and the ongoing cost of using electricity. Power consumption is going to be a significant expense, and it can turn a marginally profitable well into one not worth working.

In return for running a power line to the lease, power companies will commonly require a 5 year commitment with a minimum amount billed. It’s possible to manage the cost of electricity by understanding how power companies charge. At peak usage times, for example during the workday, a power company will usually charge more. If the demand for electricity across the whole grid goes up, they’ll also increase their rates.

By taking advantage of lower cost time periods, you can help to manage the expense for your operation. Most pumps use less electricity when they’re up and running than when they first start. Timing things so a pumping cycle starts during a lower rate time period can show savings. Run equipment that draws less power, such as a circulating pump, during peak hours. Pumping the well and other high drawing activities can be scheduled for off-peak hours. Other pumpers and the operations manager should be able to provide some guidance on how to manage your electricity consumption.

See What Brian G., CFO and Managing Partner of Mac 5 Energy has to say about the GreaseBook!