Given the current environment, independent operators around the country are reevaluating the way they operate their wells…

My family has been in oil & gas for nearly 30 years. I respect the old guard. And, sometimes new ways of doing things must be considered — especially when it directly lowers our company’s marginal production costs (the point at which we shut our wells in…)

Understand, most software companies would like for you to believe it’s the technology that’s important. However, what they don’t disclose is that whatever technological advantage they’re trying to push often comes at the price of worsening the team’s sociology.

Instead of building procedures to support your folks in the field, many of these companies limit the contributions of people. They set a tone of rules and rule following rather than thinking and rule adjusting (or even rule improving!)

With apps, it’s different. People actually want to use these tools…

Basically, we don’t add people to broken systems. People are expensive. If Operator A manages 100 wells with a staff of five people and Operator B manages 100 wells with a staff of twelve — all things being equal — Operator A wins. His investors win. His employees win. And, the company will carry on in nearly any environment. (click here to see what happens when operators refuse to go mobile...)

For Operator A, Sub-$60 oil doesn’t look so bad anymore. It ain’t party time, but no one is closing their doors either.

Admins’ and ops supervisors’ days are full. And, many times they leave the office (exhausted) and ask themselves, “what did I really accomplish today? How did I move the company forward? How am I securing a future for myself at this company?”

Rather than comparing sales tickets against oil purchaser statements and clawing back that money, Admin is stuck tracking down missing run tickets. They know they should be sending out reports to managers, investors, and State agencies, but they’re trapped just trying to organize these reports into something workable…

They can’t break the cycle of meta-work. Essentially, work that fills our days but isn’t really that important.

Does it keep us busy? Oh yeah.

Does it move the company forward? Not really.

As for management, it’s a completely different set of issues. Given their current tools, many accept that ‘skimmed oil’ is just part of doing business. They realize they must trust their pumpers (the front line!), and short of going to the field and gauging the tanks themselves they have no way to verify their production numbers. If they knew, many skimming oil purchasers and services companies would be immediately dropped (that said, you may like this write-up we did on The ‘Perfect’ Oil Production Report (and the Magic of ‘Proper’ Pumper Management…)). 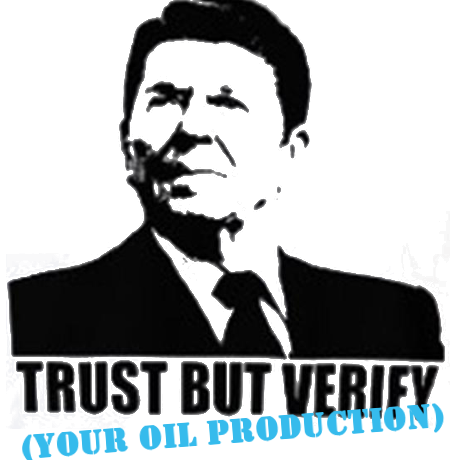 Sometimes it’s tough to know where to point the finger. Sometimes, drops in tank volumes are simply a function of a change in weather. That being said, randomized quarterly checks by a 3rd party roustabout is a very cheap (and very effective!) form of production insurance.

It sounds funny, but problems are like mushrooms: when it’s dark and rainy they multiply. Under bright light, they diminish. In an organization where there is nowhere to hide, the problems are easily illuminated.

We’ve seen examples of pumper production reports from all corners of the country. Some of these gauge sheet templates haven’t changed since the 1940s. Still others are works of art!

To the degree you can clarify your systems and hone them, you will run your business as opposed to having it run you. The culmination of identifying, documenting, and having everyone follow the core processes of your business is the way.

When you have a clear way, you immediately increase the value of your business, strengthen your control over it, and give yourself options. From there, you may grow the business, let someone else run it, sell it, or simply take more time off.

This Week in Oil and Gas History: February 13 - February 17

October 26, 2019
« Previous post
GreaseBook mentioned on CNBC
Next post »
Look what the pumpers are saying…
Copyright 2022 GreaseBook Oil and Gas Software. All rights reserved. Patents Pending. GreaseBook is a trademark of Greasebook, LLC.