Okay so It’s Halloween time and I can’t help but think of things that frighten me like plugged up Meko regulators, critters lurking in my meter houses and strange mechanics who appear late at night at my locations.

This year, there seems to be a lot of hysteria around clowns of, well, I just don’t get it. I think that’s just because most people don’t know that there are real things to be afraid of like ISIS for crying out loud. 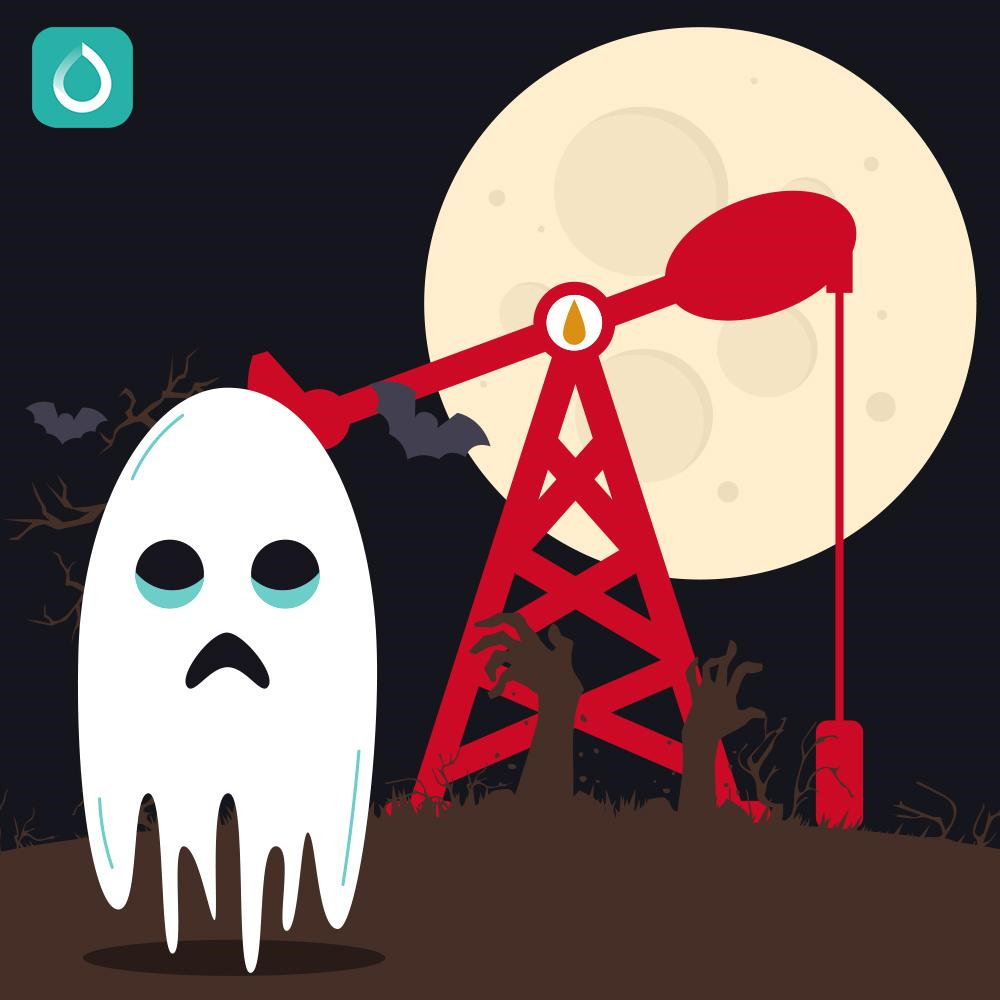 This week on Greasebook.com; The Haunted Lease! Stories from real pumpers like you about times when their leases became more horrifying than any haunted house.

And Greasebookers, reading the blog will not involve anything called work. Make no mistake about it. You could be at Disneyland in Anaheim, California, coasting through its famous Haunted Mansion, slipping into a ghostly foyer while being visited by giggling ghouls and you would not be as far away from work as you are now, reading Greasebook’s Wench with a Wrench.

This week, I was reading the 3rd chapter of the Lease Pumper’s Handbook about safety. Since I feel safety is the single most important thing on which we focus in this industry, I decided I would spend a little more time writing about it.

One of the statements in Chapter 3 mentions that pumpers, more than any other oilfield worker, do most of our jobs alone and miles from anyone who can help. This can be a serious problem when trying to do something that requires four hands. But the problems with being totally alone that I want to discuss this week are when you find yourself alone, in the dark with a well and you just know for certain that Jason Vorhees from Friday the 13th is hiding just behind the water tank.

Okay so, have you ever seen – I mean really seen – the moon in late October? It sits low and deep and orange and hangs there very creepily in the northeastern sky.

This first story is from a company pumper by the name of Donnie C for a company who operates some oil and gas wells in and around the Laverne area as well as the Panhandle of Oklahoma.

He’s been a pumper for this company a long time and remembers well one night, just after Halloween when he was called out to a well on a particularly spooky night. So here he is to tell you about it.

“We have a well nine miles east of town called the Gonzer 3. It was on 24 hour satellite alarm call. It was actually one of the best wells we had at the time. It was making anywhere from 200 to 300 hundred Bbls a day. I would go to that well in the morning, at noon and again at 7 p.m. before I went home for the day.

Anyway, I get a phone call at 4 a.m. that this well is down so I get dressed and go out there and it starts snowing. It’s cold and dark – as dark as I have ever seen it. And did I say cold? Boy was it cold. I pull up to the pumping unit, get my jumper cables out and hook up to the pumping unit engine. Everything is all quiet except I’m hearing the wind howling in this funny, low pitch in the trees.

I have to admit, for some reason I was nervous. I hit the start button on the pumping unit and all of a sudden, it pulls so much juice that it shuts my pickup down totally. The lights go out and there is no sign of life at all with my truck and I’m standing out there in the dark with snow spitting in my face and no other sound than the wind howling in that creepy way in the trees.

So I feel my way back to my truck and I get in that pitch black pickup that won’t start either now and I call Mark (another pumper). I told him what had happened and he said he would come on out to help me. It was so creepy out there and I kept thinking I was hearing things so to keep my mind off of it, I put my headlamp on my hardhat and went and gauged the tanks. A little while later I see a light coming along through the trees and I call him to tell him to be careful because the roads are not good. He says, ‘I haven’t even left the house yet.’

I froze. I could hear my heart thumping in my chest because I knew I had seen lights.

Thank you Donnie C for that spooky tale and Greasebookers, we are not done yet. I have one more for you that you should enjoy. This one is from yours truly.

“Okay, so when I was working in Perryton, Texas for Chaparral Energy, we had a wonderful schedule; eight days on and four days off and then seven days on and then two days off. I enjoyed having a long weekend to go away and actually see some people. But it meant that you often had to work over the weekends.

Having call on this central battery was involved, since every piece of equipment out there was on a satellite call system that would ring your phone automatically when something went down. There were times when the weather was bad that I was called three and four times in one night to go fix things.

On one particular night, which happened to be over the Halloween holiday, I was pretty happy to be on call because the weather was warmer than normal on this weekend and I anticipated no trouble with any compressor. Yay, I thought to myself. I will actually get some sleep.

Sometime around midnight, the phone went off and it told me that our most reliable electric compressor had gone down. Already, I had a bad feeling. I just knew something wasn’t right because even on the worst days, when my gas engines were going down, this electric compressor stayed running. And I knew there was power, or I would have gotten a call telling me there was a power failure.

So I dressed quickly and nervously. On my way out there, I called my best friend Evelyn, who is a 35 year career pumper and told her I was a little freaked out about this call. She said just keep me on the phone.

So when I get there, the place is deathly quiet. All the compressors have now gone down, which sometimes happens when one goes down because it increases the suction pressure since there aren’t as may compressors moving the Co2. The moon is this giant orange ball still hanging ominously in the sky and every shadow and every creaking sound is making me jumpy. I walk up to the first compressor that had done down and checked the computer to see what caused it to fail and it gave me a code that meant it had been put down manually.

The hair raised on the back of my neck and my heart was beating so fast I couldn’t even think. I reached for my phone to tell Evelyn what I found and that’s when I saw him out of the corner of my eye.

It was a compressor mechanic and he was getting out of his truck and heading my way, obviously drunk. He greeted me like he wasn’t surprised to see me. “I was hoping I’d run into you out here sometime,” he said in a creepy way.

I had a 14″ pipe wrench in my hand and I put it up in front of me before he even got close to me and said, “Did you put this unit down?”

He said, “I just adjusted the RPM on the gas engine compressors, it needs to be running at about 1,600.”

I said, “look, you need to get in your truck and go on.” He told me the only reason he stopped here was because he had been drinking and didn’t want to drive. I said, I don’t care what you’re doing, keep your dick-beaters off of my compressors unless we call you to work on them.”

He made some comments about what an awful and profane woman I was and how he was just trying to be friendly. But he did finally leave  the area. It took me another 45 minutes to get all those compressors back up and running and I was a nervous wreck the whole time I was there.

Many thanks have to go out to Evelyn for staying awake and on the phone while I did all that. Do you know how it is to be on the phone when someone is starting a compressor? It’s awful and I appreciate her being with me through that.

Anyhoo,  I may have sounded really brave and tough to that guy, but that really shook me to the core. I still think about it from time to time when the moon hangs low and orange in the late October sky.

The Basics of Gas Lift Pumping in Oil & Gas Production

How to Split More (Gas Meter) Lines Than Pablo Escobar

December 27, 2016
« Previous post
It was a Muddy Pumping Christmas
Next post »
How to Split More (Gas Meter) Lines Than Pablo Escobar
Copyright 2020 GreaseBook Oil and Gas Software. All rights reserved. Patents Pending. GreaseBook is a trademark of Greasebook, LLC.