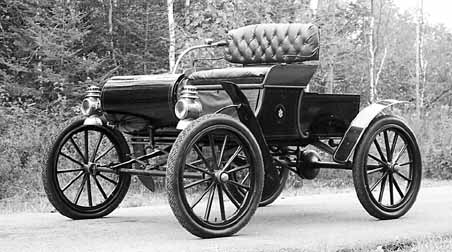 Ransom Eli Olds was a pioneer in the automotive industry beginning when he established the Olds Motor Vehicle Company in Michigan in August of 1897. This company was the first auto manufacturer in Detroit. In 1899, Olds Motor Vehicle was renamed to Olds Motor Works.

In R.E. Olds: Auto Industry Pioneer, George Mays says that by the early 1900’s Olds had made eleven prototypes. Out of the eleven prototype vehicles, at least one used each power mode of gasoline, steam and electricity respectively. Olds was the only American to manufacture and sell each type of automobile.

Olds also created the concept for modern assembly lines utilizing a stationary assembly design. Henry Ford was the first person to use a moving assembly line. In 1901, the first mass-produced automobile was sold by Olds Motor Works.

In 1892, Patillo Higgins founded the Gladys City Oil, Gas and Manufacturing Company. He was later to nickname the “Prophet of Spindletop.”

Higgins was a self-taught geologist and a Sunday School teacher. He and his partners leased over 2,500 acres of land in Texas, near the city of Beaumont. Higgins thought that Spindletop Hill, also nicknamed “Big Hill,” contained oil even though many scientific experts doubted the possibility.

One Sunday, when bringing his class to a regular trip on the hill, Higgins spotted natural gas and oil in the area. Higgins decided to name his company after his favorite student from Sunday School.

In 1895, Higgins made his departure from Gladys City Oil Gas and Manufacturing Company. However, the company still made its mark on the oil industry. The Spindletop field soon became the most prolific oilfield in the United States and more productive than all other oilfields in the world combined.

Patillo Higgins’ trust in the “Big Hill” allowed for the eventual formation of oil companies like Sun, Mobile, Texaco, and Gulf. 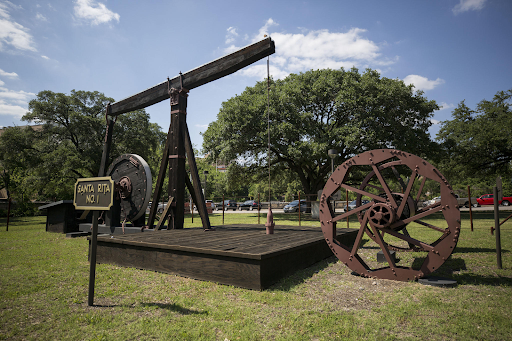 The 4 ½ square-mile field was found in Big Lake and was uncovered after the Texon Oil and Land Company drilled for 21 months. Petroleum royalties provided the university with over $4 million dollars in just three years.

The well’s walking beam and more equipment were moved to the university’s Austin campus in 1958. According to the student newspaper, this well improved conditions at the university. In one statement, it was said that this allowed the campus to go from shack-like buildings to modern classrooms. 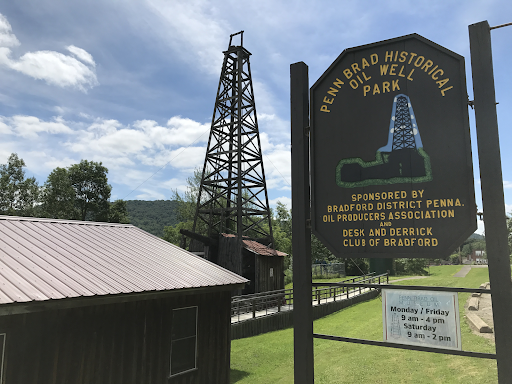 In 1937, a gusher in McKean County surprised many, including the company that drilled it, when it began sprouting from the ground. The Niagara Oil Company, started drilling the well on Music Mountain, ultimately uncovering the first oil discovery in the area in over 70 years.

This well reached unprecedented depths at the time with a total recorded depth of 1,630 feet.

The producing well was located under the Bradford Sands, which had been discovered more than 50 years earlier. This region’s oil is known as one of the best lubricants on the planet. A refinery in Bradford, now the American Refining Group, has been refining oil in McKean County since the early 1880s.

The American petroleum industry officially got its start in Titusville, Pennsylvania when Edwin L. Drake, a former train conductor and William Smith, a former blacksmith, were hired by Seneca Oil Company to drill land in the area. They went on to discover the first commercial well in America. The well was drilled at around 70 feet near Oil Creek, and it eventually produced 25 BOPD. 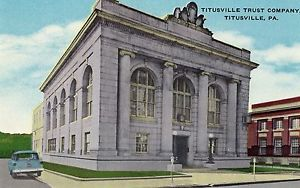 Drake developed new drilling methods at Oil Creek. One of these methods was to drive an iron pipe into the well and preserve the integrity of the bore. Unfortunately, after months of drilling problems and setbacks, the people of the town named the well “Drake’s Folly.” Investors then addressed letters with “Colonel” Edwin Drake, in an attempt to improve his reputation.

Oil was seen floating at the top of a pipe by one of Drake’s drillers. “Uncle Billy” Smith made the discovery in the summer of 1859. A bit reached what was later called the First Venango Sand. Drake used a kitchen water pump to pump the oil. 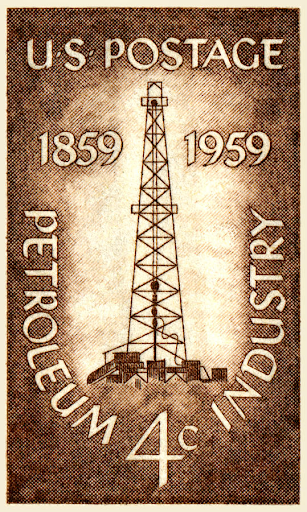 The keynote speaker called dedicating a stamp to commemorate 100 years of the oil industry one of his “greatest pleasures.” He also described the impact that petroleum had on peace and war in America.

Summerfield stated Americans have a good reason to be grateful to the industry. He went on to say that the American way of life wouldn’t have been possible without petroleum providing power.

In 2009, the U.S. Postal Service Stamp Advisory Committee refused requests for another oil industry stamp to commemorate the 150th anniversary of the petroleum industry. However, before this, Kermit the Frog and nine total muppets had been given a stamp.