This Week in Oil and Gas History: December 26 – January 1 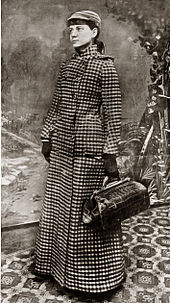 Nellie Bly, owner of the Ironclad Manufacturing Company and holder of the 55 gallon drum patent, was a journalist before she was an industrialist. Here she is pictured preparing for her round-the-world trip, which she completed in 72 days.

A man by the name of Henry Wehrhan, who was working for Ironclad Manufacturing Company, applied for a couseveral patents of steel barrels, replacing the then industry-standard wooden barrels of the day. These patents would eventually go on to be developed into the modern 55-gallon steel drum.

Ironclad Manufacturing was owned by the famous Nellie Bly, an independent woman who had worked as a journalist for many years. Ten years earlier she had married the founder of Ironclad, Robert Seaman. And when Seaman passed away in 1904, he left Bly as president of the company, making her the official holder of the 55 gallon drum patent. 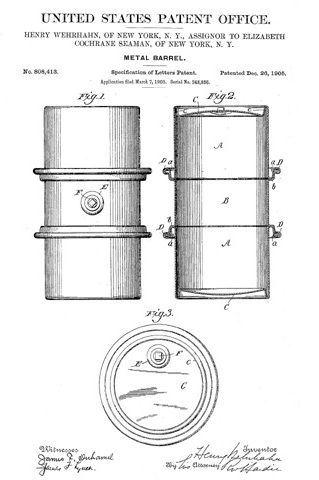 The patent for the steel barrel Wehrhan designed.

Unfortunately, the company would go bankrupt due to embezzlement by a factory manager and Bly would ultimately return to journalism. 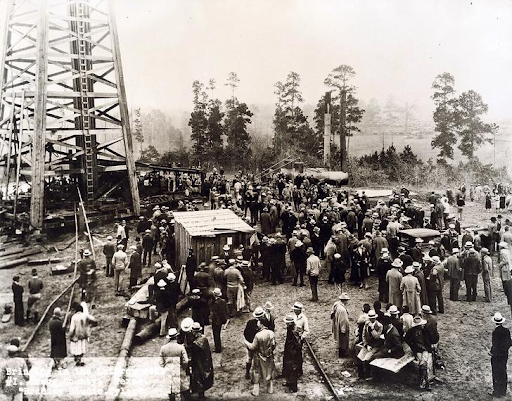 The Lathrop No. 1 Well, seen here, was drilled 15 miles north of the Lou Della Crim No. 1 Well, confirming that the East Texas oilfield was larger than most had believed.

When J. Malcolm Crim completed the Lou Della Crim No. 1 Well, which he named for his mother, he had no idea that the well would unveil more than just oil. The resulting gusher proved that the East Texas oilfield is much larger than was previously believed.

Geologists had claimed that it was unlikely that anyone would find oil in the area around Kilgore, Texas. However, Malcolm Crim still drilled on the land belonging to his mother, ignoring their predictions. There are a few myths surrounding his motivations for drilling, but no matter what the reason, he proved to be correct when he struck oil. The well produced tens of thousands of barrels a day, and confirmed the massive size of the East Texas oilfield.

Other successful wells would continue to showcase the size of the oilfield, which would eventually be determined to be nearly 500 square miles in size. 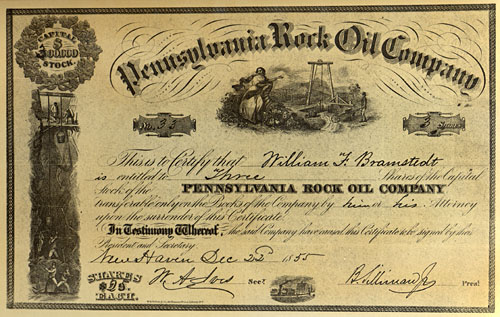 A stock certificate for the Pennsylvania Rock Oil Company.

In 1854, George Bissell and six other men formed the Pennsylvania Rock Oil Company, the first business organized to drill for and sell oil in the United States. Openedin Albany, New York, the company initially had difficulty attracting investors.

The brand underwent a massive reorganization, before the original owners lost control of the business in the stock panic of 1857. It was eventually purchased by Robert Townsend who incorporated it as part of the Seneca Oil Company.

It was Townsend and Seneca Oil that hired Edwin L. Drake whose oil strike in Venango County Pennsylvania would become known as the first commercial oil well in the United States.

The Ohio Oil Company would later buy Transcontinental Oil, including the Marathon brand, and its distinctive Greek runner logo.

In 1954, the Ohio Oil Company drilled a hole that would go on to set a depth record. The hole was located in Kern County, California, in the San Joaquin Valley, and was over 4 miles deep. Technological advances allowed drilling to that depth, though the technology of the time did not prove quite up to the challenge. The drill became stuck at the bottom and had to be fished out of the hole. Despite the depth of the hole, no oil was discovered.

A well that was nearly as deep, also located in Kern County, was eventually drilled by the Richfield Oil Corporation. However, it was short of the record by about 4,000 ft. Wells of that depth cost over half a million dollars to complete, yet despite the cost, over 600 wells were drilled in California that year alone.

Ajax, Just Another Word for Excellence...

How to Set Up Scheduled Reports