This Week in Oil and Gas History: December 5 – December 11 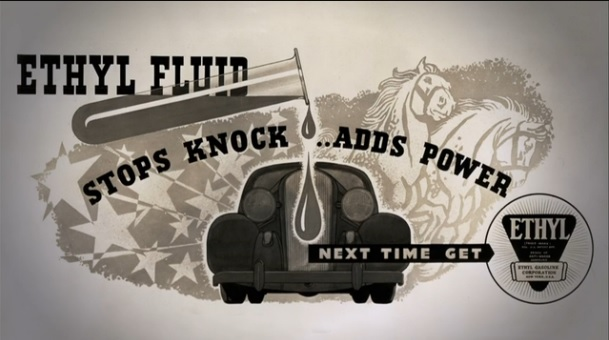 Gas with a tetraethyl lead additive, or ethyl as it was advertised, promised to reduce the amount of ‘knock,’ which was a problem with early automobiles.

Imagine worrying about your engine getting damaged every time you turned the key. That used to be the case with early automobiles. That is until 1921, when scientists working for General Motors discovered that adding tetraethyl lead to gasoline helps prevent this damage, also known as knocking.

Early automobiles frequently suffered from problems with mis-timed combustion in their cylinders. This would result in a jolt that reduced efficiency and power so much that it could damage the engine. Scientist Thomas Midgely Jr., working under Charles Kettering, tried several different chemical additives before finding a compound of lead that eliminated the knocking effect. This additive allowed the gas to compress further, preventing the early combustion.

Leaded gas was used for decades, but it was phased out in the late 70s. Lead poisoning had been shown to have a range of negative consequences, including physical, developmental, and cognitive defects. Since the ban, environmental lead levels have dropped greatly. Today, it is only used in a few places around the world. 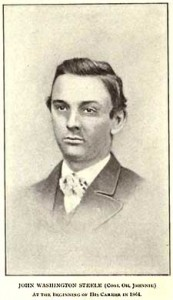 After years spending through his inheritance, John Washington Steele became a recluse and worked as a railroad station agent.

When the McClintocks, a couple of Pennsylvania farmers, decided to adopt a baby boy in 1844, they had no idea that the former orphan would go on to be one of the most prolific spenders ever associated with the oil business.

The McClintocks owned the plot of land where Edwin Drake would discover oil in 1858–kicking off the first oil boom in the US. The McClintocks leased their land to drillers, making a fortune off their royalties. When the McClintocks passed away their adopted son, John Washington Steele, inherited their fortune.

Nicknamed ‘Coal Oil Johnny,’ he became known as one of the biggest spenders of his era. In a few years he had spent his way through his inherited fortune and fell into bankruptcy. He spent the majority of his later life trying to avoid the public eye. 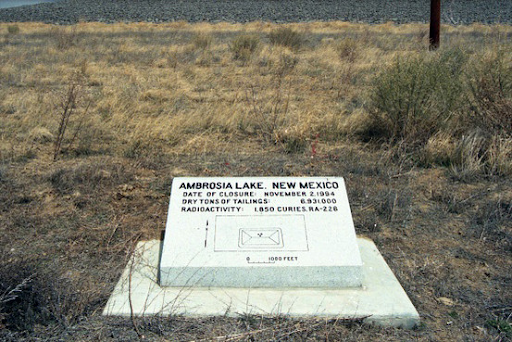 The Ambrosia Lake site produced over 100 acres of radioactive tailings in its nearly three decades of operation.

On December 10th, 1955, Life magazine did a feature on Stella Dysart and her uranium mine, which was one of the first features of its kind for a single wealthy woman. Mrs. Dysart made a fortune off the discovery after years of failed oil drilling.

Dysart spent decades drilling in McKinley County, New Mexico without striking oil. In 1955, a sample from one of the dry wells was tested and found to contain radioactive uranium. Dysart had discovered one of the richest uranium deposits of an unusually high-grade ore.

While she had been tens of thousands of dollars in debt just a few years earlier, when Dysart appeared in Life, she was wearing mink and standing in front of the uranium mine that made her rich. 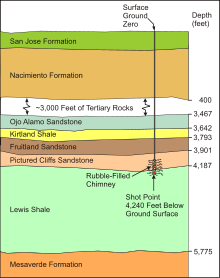 After the explosion a rubble filled chimney was left behind.

Fracking has long been a popular procedure in the oil industry, designed to fracture the seams underground, allowing petroleum to flow more freely. However, in 1967, Project Gasbuggy attempted to take a new approach to fracking that utilized a nuclear device.

While fracking had been used for nearly 40 years, previous methods had used high pressure fluids or explosives like dynamite.

The project was part of an effort to find peaceful uses for nuclear devices. A hole was drilled to a depth of 4,000 ft near a few low producing wells. A 29 kiloton bomb was lowered into the hole and exploded. A huge cavern underground was created and immediately collapsed. Though the project did produce nearly 300 million ft2 of natural gas, it was radioactive and couldn’t be used.

Geologists and nuclear experts from the government and a private company were part of the project. The effort to use nuclear explosives for fracking would be abandoned after the experiment. 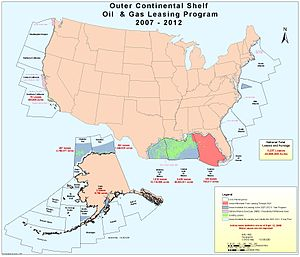 A 1947, the US Supreme Court decided to extend the area available for off-shore drilling from three nautical miles to 200 nautical miles. That decision gave the Federal government control over offshore drilling and the revenue from petroleum leases. In 1954, the first leases earned the US government over $100 million.