This Week in Oil and Gas History: February 13 – February 17

In February of 1924, four independent petroleum companies and an exploration firm performed a consolidation merger, they emerged under the new moniker Forest Oil Corporation. The company, which would go on to become the globally-recognized Sabine Oil became an early leader in the field of technology known as Secondary Recovery.

Secondary Recovery works on regulating pressure levels of existing wells by using external energy forces such as water or cO2.

With a new company came the need for a new emblem, and Forest Oil Corporation opted to include a Yellow Dog Lantern in the logo. The ‘Yellow Dog’ is an iconic symbol in the oil and petroleum world. First patented in 1860, the two-wicked lamp’s etymology remains murky. Some say it gets its name from the two flames looking like the eyes of a dog, others saying that the flames together would cast a shadow of a dog on the ground below.

The company was originally based in Bradford, Pennsylvania, which was fast becoming one of the first billion-dollar oil fields in the United States. It was at the vanguard of important and innovative ventures; such as water injection. This technology has proven itself to be one of the most economic and efficient methods of secondary extraction, by assisting in maintaining the pressure in the well, increasing production of hydrocarbon reserves and reducing environmental impact. 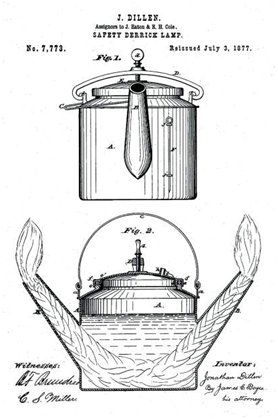 The yellow dog lantern was developed specifically with oil regions in mind, where dropping and breaking a regular lamp could spell serious danger for all nearby.

On February 16, 1935, brought about the official birth of the Interstate Oil Compact Commission (IOCC). The organization, which was based in Oklahoma City, had received congressional approval the summer before and was looking to revolutionize the oil and gas industry in America.

The organization got to work fast. They drafted up the ‘Interstate Company to Preserve Oil and Gas’ to propose that all states who signed the agreement would work towards minimal physical waste of oil and gas, decommission any unsafe or inefficient wells, and work against undue flooding and unsafe drilling of wells. The Law of Capture culture of the time, as well as the Great Depression ravaging the United States, meant that there was a lot of waste and unfeasibly low prices, and thus a need for some cooperation and self-regulation.

Representatives from Illinois, Kansas, Texas, Oklahoma, Colorado and New Mexico conferred in this unique multi-state body to start implementing the provisions set forth in the agreement. It was first chaired by the Governor of Oklahoma Ernest W. Marland, founder of Marland Oil Company. Marland, perhaps surprisingly for an Oklahoman big oil man, ran as a Democrat, and created more than 90,000 new jobs in downtrodden Oklahoma with his FDR inspired Little New Deal during his time as governor.

It is now known as the IOGCC, with the word ‘gas’ being added to the title in 1993, and claims to have helped establish effective regulation within the oil and natural gas industry. Through a variety of programs the IOGCC has been able to disseminate information, technologies and regulatory guidelines in an effort to honor their founding father, the late Ernest W. Marland.

According to the commission, their goals for the future are simple, to ensure the future of the nation’s energy is a successful one.

Ernest W. Marland lost his fortune in oil twice over but continually worked to make the industry safer to work in.

When the pine industry began to dwindle in Lufkin Texas, a sawmill machinery repair shop called the Lufkin Foundry and Machine Company saw opportunity in the fledgling industry of petroleum drilling. This had much to do with the historic turn of the Century ‘gusher’ 100 miles or so away in Beaumont, Texas.

In 1925, when inventor Walter Trout was working for the company, he designed a new means of pumping oil that is still used to this day. His idea would have a working prototype by the end of the year, and soon after his counterbalanced pumping unit was on the market. Installed first on a Humble Oil and Refining Company well in Hull, Texas, trout confessed that even though the pump was perfectly balanced and fit for purpose, that the aesthetics brought with it much ridicule and criticism.

The familiar sight of the nodding pump is often seen even today and Lufkin Industries manufactured and sold more than 200,000 of Trout’s ‘thirsty bird’ before being bought out by General Electric in 2013 for $3.3 billion. The original and historic foundry in downtown Lufkin was closed in 2015. 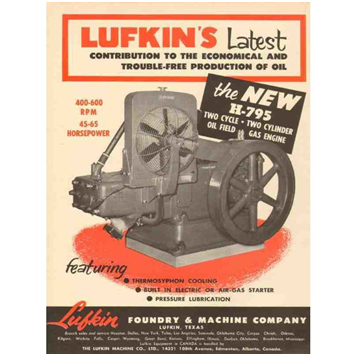 February 17, 1944 –Alabama Makes a Major Splash in the Oil Industry

The state of Alabama took its place on the national oil map when H.L. Hunt, a Texan who had found previous success in Arkansas, drilled the No.1 Jackson Well in Choctaw County. In 1944, Hunt drilled a wildcat well— revealing the Gilbertown Oilfield. His efforts proved there is merit in the old saying “patience is a virtue” as 350 previous attempts to drill in the state of Alabama had returned dry.

Gilbertown was discovered at a depth of 3,700 feet in the Eutaw Sand and it produced 15 million barrels of oil. Unfortunately for Hunt, the search for another oilfield was all for nought as he spent another 11 years turning up nothing by dry holes. It would not be until the 1960s that more oilfields were discovered in the state of Alabama, and according to the Independent Petroleum Association of America, between 1944 and 2014, more than 16,500 wells have been drilled there.

The discovery was in part due to the work of historian and geologist Ray Sorensen, who discovered a report on the Drake well by Michael Tourney which documented reports of a discovery of an oil seep near Oakville in Lawrence County. Tourney noted “tar, or bitumen, floats on the surface, a black film very cohesive and insoluble in water,” this was a rare, but accurate sign that there was oil nearby. 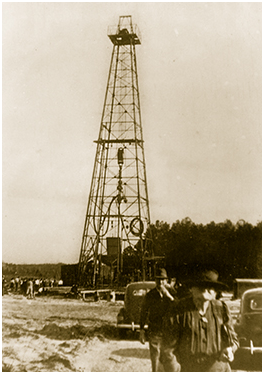 Inventor and entrepreneur J.L. Hutching of New Jersey makes an early attempt at transporting oil from the field to a refinery via pipeline. Using a pipeline that stretched two and a half miles from Oil Creek to the Humboldt Refinery, and measured two inches in diameter. However, the newly patented pump was not fit for purpose. Structural weaknesses and flaws in the technology rendered it useless due to leaks, resulting in oil waste. It would not be until 16 years later, in 1879, that the first crude oil truck line was built in the Tidewater region of Virginia.

A Conservation Act “to prevent the waste of natural gas and to provide the plugging of all abandoned wells” was enacted by the Ohio House of Representatives in 1899, making the Buckeye state one of the original states to legislate conservationist measures for the oil industry.

Known as the ‘Trenton Field’, located in Eaton and Portland, it was at the home and epicentre of the Indiana gas boom. It stretched over 5,120 square miles and into 17 Indiana counties. Parts of it even reached into Ohio, and within three years of the discovery, 200 enterprises were established drilling, distributing and selling gas from the Trenton field.

Ohio is now one of the leading producers of gas and oil in the nation. It has drilled 275,000 wells to date, surpassed only by production giants in Texas, Oklahoma and Pennsylvania. 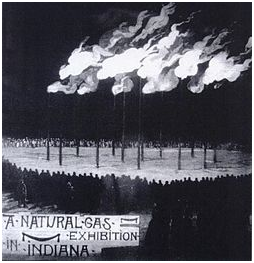 Flambeaux exhibition in Indiana at the height of its gas boom.

Simple App replaces Oilfield Software for operators and their pumpers...