This Week in Oil and Gas History: February 20 – February 26

Every week is filled with petroleum facts. Some only pertain to the time it happened. Others have affected us for generations. Here are a few that took place between February 20th to the 26th. 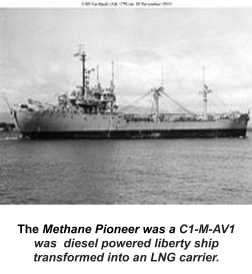 The Methane Pioneer may not seem like a perfect name for an experimental tanker, but for the Comstock Liquid Methane Corporation, there was no better moniker. After a three-week journey from Port Charles, Louisiana, the Pioneer arrived at Canvey Island, England. It became the first LNG tank and was a milestone for international cargo delivery.

The Methane Pioneer wasn’t designed from the bulkhead up. Instead, it was a refurbished cargo freighter from World War II with a storage capacity of 2,000 tons. The project was a joint effort by Comstock and The British Gas Council to determine if natural gas could be exported across many thousands of miles.

The Methane Pioneer remained in service until it was scrapped in 1972. 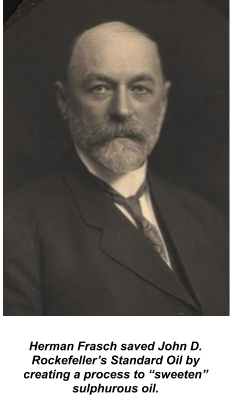 John D. Rockefeller wouldn’t be known for his philanthropic achievements today if not for the enormous wealth he accumulated in the 1880s with Standard Oil Company. He also wouldn’t have owned almost 90% of the nation’s oil refineries if he didn’t look for improvements in the filtering process.

If he didn’t, his fortunes may have stopped with the 40 million barrel stockpile of sludgy and smelly oil he pulled from fields near Lima, Ohio. This Skunk-Bearing Oil was of little use due to its sulfurous aroma. That is, until Herman Frasch came along. A former Standard Oil employee, Frasch patented a process to mitigate the sulfur presence in the oil to sweeten it, thus increasing its value. The process allowed Frasch to return to Standard Oil and made both he and Rockefeller quite wealthy. 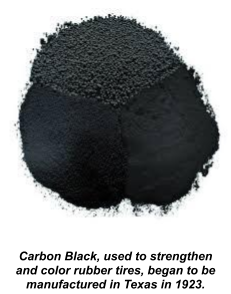 February 22, 1923 — Carbon Black Goes Into Production at the First Factory in Texas

Once upon a time, automobile tires were pure white — the natural color of the rubber. Of course, they darkened over time due to contact with soot and dust, which could be frustrating for auto-owners looking to maintain the look of their vehicle.

Enter Carbon Black. In the early 1910s, B.F. Goodrich Company founded the process to increase the durability of its rubber tires. Addition of the product to the rubber-vulcanizing process increased a tire’s strength and gave it the black color we know today.

In 1923, Carbon Black production joined oil refining boom in Texas when J.W. Hassell & Associates was granted approval by the state’s Railroad Commission to build a plant in Stephens County. The success of the plant  joined that of oil refinement to increase the state’s tax revenue. 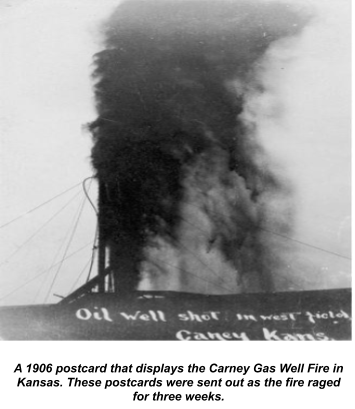 When a gas fire burns for nearly a month, the national press and its numerous readers are going to take notice. This occurred in 1906 when a New York Oil and Gas Company well approximately four miles from Caney, Kansas, burst into flame after a lightning strike.

The bright, high flames could be seen up to 40 miles away. They provided enough illumination to allow residents of surrounding towns to read by its light. Postcards of the fire were created and sent out with people describing how the ground shook due to the constant explosions.

In all, nearly 70 million cubic feet of gas was dispersed was released into the air daily by the fire until it was extinguished on March 29th. Kansas and the rest of the nation, had time to breathe again … until the Great San Francisco Earthquake three weeks later. 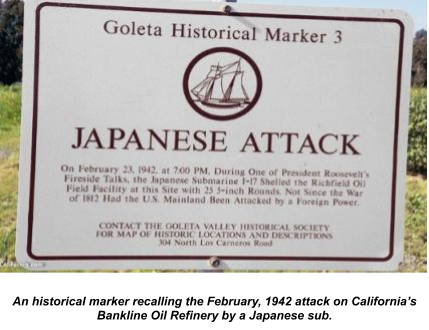 As the United States entered World War II, fears of the nation getting attacked rolled through the minds of its citizens. Many felt New York or Washington D.C. would be the main targets of the Axis. However, it was California’s vulnerability that was first taken advantage of.

Around 7 P.M. Pacific Time, around one of President Roosevelt’s Fireside Chats, the Japanese sub 1-17 surfaced off the California coast near the town of Goleta and targeted the facilities of the Bankline Oil Refinery. The 1-17 shelled the refinery and the surrounding shoreline for approximately 20 minutes. Of the shots fired, only two landed at the refinery to damage an oil derrick pier and pump house. In total, the estimated cost of damage was $500.

While the damage was minor, blackout conditions and the fear it incited in the population of Southern California continued to remain throughout the war. 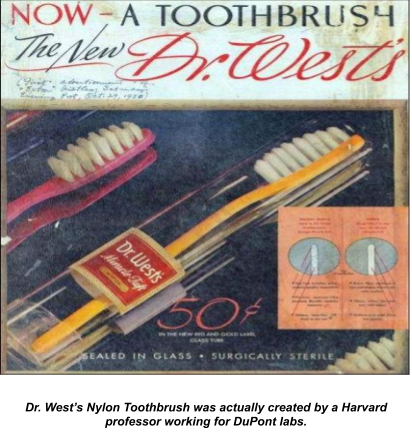 Did you know people used to brush their teeth using bristles made of pig hair? This was commonplace, until the Weco Products Company of Chicago started manufacturing toothbrushes made of nylon bristles.

At the end of the 1930s, Weco released Dr. West’s Miracle-Tuft Toothbrush which was made with nylon bristles. However, “Dr. West” wasn’t the real inventor. That was Wallace Carothers. A Harvard professor working for DuPont Labs, Carothers spent 10 years working with different materials until he came up with the bristles which were trademarked as EXTON.

Weco captured the market in the late 1930s, by selling the new toothbrush for just 50 cents. However, their monopoly on the market didn’t last long. Just 12 months later, Johnson & Johnson released a competing product. 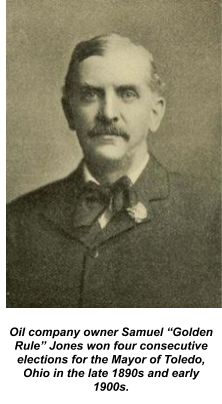 Samuel “Golden Rule” Jones was a noteworthy individual during the heydays of the Western Pennsylvania and Ohio Oil Rush of the late 1800s. Searching for and finding an oil field on the outskirts of Lima, Ohio, Jones created the Ohio Oil Company, which eventually purchased by Rockefeller’s Standard Oil. He then moved to Toledo started the S.M. Jones Company which sold oil manufacturing tools.

In both companies, “Golden Rule” Jones paid his employees high wages and offered benefits. He also asked them to employ the “Golden Rule” of working hard and being honest. It was during his time in Toledo that the Republican Party asked him to run for Mayor under a “Golden Rule” platform. He won and took his honesty into politics by offering government workers the same rates he gave to his factory employees, establishing free kindergartens and designing lodgings for the homeless. Frustrated by “Golden Rule” Jones’ progressive traits, the Republican Party shunned him during the 1899 election. Nevertheless, he still won the next three elections as an Independent. 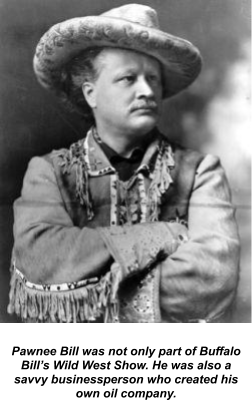 Pawnee Bill is not a government law. Instead, it’s the show name of Gordon William Lillie, a member of Buffalo Bill’s Wild West Show. Gordon received the nickname when he became the show’s Pawnee translator.

During and after his time at the show, Pawnee Bill invested in numerous industries, including oil. As World War I came to a close, he incorporated the Pawnee Bill Oil Company in Oklahoma to, according to a 1919 Petroleum Age, help the allies and Uncle Sam save the world. However, with the war over, there wasn’t much need for so much oil anymore. Still, the oil company was able to provide a dividend to its investors in 1921.

Though he seemed to have shut down the oil company at some point, Pawnee Bill kept active by opening Pawnee Bill’s Old Town in 1930 and allowing his ranch to be used as a film location. 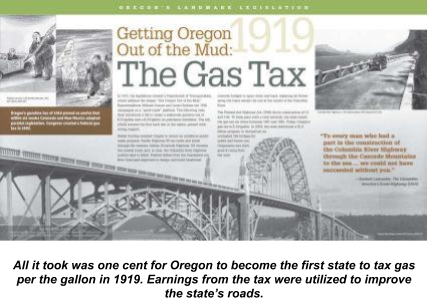 Oregon is only one of two states which doesn’t permit drivers to pump their own gas. With this in mind, it shouldn’t come as a surprise that this Pacific Northwest was the first to enact a gasoline tax. The simple reason: improved roads.

The measure for a gas tax was introduced by state legislator Loyal Graham in connection to a campaign by Oregon’s Highway Commission to help build a better road system. The hope was the system would prevent so many cars getting stuck in the mud. The bill was approved in 1919 and, from that moment on, a one cent tax was applied per each gallon of fuel. The total in the late 1910s, including the price per gallon was 26 cents. 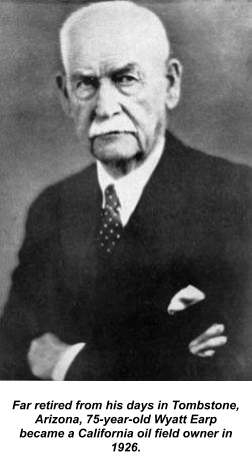 Many know that Wyatt Earp was a prominent player at the Gunfight at the O.K. Corral in Tombstone, Arizona in 1881. However, he had other ventures and attitudes. Earp was an avid gambler and opened a gambling house in Seattle right around the start of the 20th century.

In the mid-1920s, as he reached the ripe old age of 75, Earp decided to invest in California oil fields. He asked his common law wife, Josephine, to submit the papers and claim fees. However, she gambled away the fees for the claim, which eventually became valuable. Earp eventually put the claims under his sister’s name instead.