This Week in Oil and Gas History: February 6 – February 12

February 7, 1817 – The Advent of a New Technology Born in Baltimore

The nation’s first gas fuelled public street lamp lights up a street in Charm City and with that the Gas Light Company of Baltimore becomes the first commercial gas lighting service in the United States. Baltimore was the first city to begin using gas lit street lights outside of Europe, 110 years after they were introduced in London.

In a move away from using oil to illuminate the streets, the enterprise used distilled wood and tar to produce the gas that would light up the darkness of Baltimore’s streets. This continued until electric lights began to be used more progressively throughout the 20th century, beginning after the First World War, with the final gas lamp being extinguished in 1957.

Forty years later, in 1997, a monument to the first ever street gas lamp was erected on the corner of North Holliday Street and Lemon Street, where a street lamp— a replica of the 19th century standard—stands decorated with a plaque reading “Site of the First Gas Street Lamp in America, February 7, 1817.”

Esteemed Baltimore portrait artist and museum curator, Rembrandt Peale, following his brother Ruben’s footsteps in curating the Museum of the City of Philadelphia, presented a modern view of the city with the whole museum lit by gaslight. This innovation stunned local socialites and capitalists. In turn, Peale was able to acquire vital gas lighting patents and was able to establish the Gas Light Company of Baltimore (today known as BGE a subsidiary of Chicago based Exelon), an innovative enterprise which utilized incredibly smart technology for the time. With his “Gas lights, without oil, tallow, wick or smoke,” Peale changed the way American twilight looked forever. 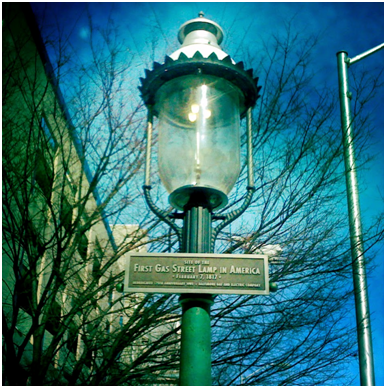 A replica of the first gas powered street lamp in Baltimore, Maryland

Drilling expanded its horizons out into the galaxy on February 9, 2013. NASA received images from its Curiosity Rover stationed on Mars showing that it had bore a small hole in the surface of Mars, the first feat of its type by mankind on another planet in our solar system. At only 2.5 inches deep, the sampling hole is based in the Yellowknife basin of the Gale crater on the red planet, our second closest planetary neighbour in the solar system.

The rover, which is only slightly larger than a terrestrial Mini Cooper, used its 7-foot robotic arm to carve a hole into a outcrop of flat rock to retrieve dust samples intended for analytical equipment within the rover itself. The findings are intended to determine whether Mars has ever offered a favourable environment for microbial life, and the findings have been ‘tremendously exciting’ according to Dr. Jim Green, Director of NASA Planetary Sciences Division at NASA HQ.

Upon drilling into the sedimentary rock, the resulting vibrations revealed a whitish powdery substance, thought to be calcium sulphate and other rust coloured dirt. The breathtaking images received from Curiosity show two drilling sites. The first is a shallow depression, marked only by the rotary-percussion drill bit being tested on the surface, then next to it, the fully bored well. The drill was of a low percussion to ensure that the bedrock was not shattered in the process of drilling.

The current design of the Curiosity Rover will be the precursor to the next planned Rover mission to Mars, scheduled for 2020. 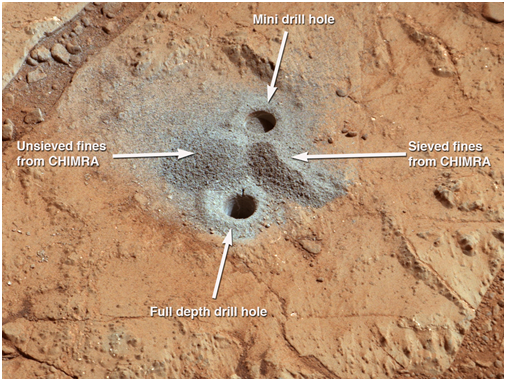 Stunning photos from the drilling expedition on the surface of Mars.

In 1910, one of the oldest and most prolific oil fields in the United States was discovered along the Kern River near Bakersfield. The Buena Vista oilfield was discovered by the Honolulu Oil Company and while originally used as a gas well, further drilling unveiled rich, oil-producing sands.

The oil field was known as ‘Honolulu’s Greatest Gasser’ until steam injection, an increasingly common method of extracting crude, helped extract between 3,000 to 4,000 barrels of the highly viscous heavy California oil.

Prior to the First World War, in 1912, under President William Taft, the United States Navy began to move from coal to oil for its warship boilers. The Buena Vista oilfield then became the Naval Oil Reserve No.2  following in the footsteps of the original reserve in Wyoming.

February 10, 1917 – Establishment of the American Association of Petroleum Geologists in Tulsa

As oil use began to proliferate around the world from industrial to domestic usage, the demand for oil grew. In turn there was more of an economy for oil, but the methods of determining where a discovery could be made were still primitive, and the science was equally dubious.

Enter the American Association of Petroleum Geologists (AAPG), who organised as the Southwestern Association of Petroleum Geologists in Tulsa, Oklahoma. Convening in Henry Kendall College (later renamed Tulsa University), the association was a group of 90 scientists dedicated to promoting the science of geology in the Petroleum industries, but also in order to focus on technological “improvements in the methods of exploring for and exploiting these substances.”

However, the main objective of the association was to establish a consensus group where only the most credible and reputed petroleum geologists would be given admittance.

They established Bulletin, a bi-monthly, peer-reviewed scientific journal was published by the AAPG, and included papers written by the leading contemporaneous geologists of the day.

By 1920, the group’s membership had grown exponentially, but fears grew that some new members were less scrupulous than the original patrons. As noted in an oil trade publication, the group was trying to mitigate any “fakers” and “unscrupulous men inadequately prepared” for the geological work that stood in the way of the oil. Membership of the AAPG grew throughout the years, reaching 10,000 members by 1953. In the interim, in 1945, the AAPG teamed up with Boy Scouts of America by recognising the Geology Merit Badge. 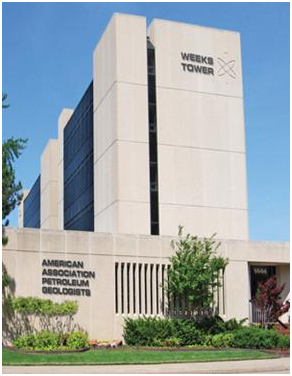 The tower was designed by the eminent architect Frank Lloyd Wright, including globally-recognized  Solomon R. Guggenheim building in New York. For Bartlesville, the Price Tower is a landmark and monument all in itself.

The Price Company has been involved in two of the United States’ largest and most ambitious oil and gas undertakings. This includes the construction of Big Inch Pipeline, running from New Jersey to Texas, that was built as an emergency measure during the Second World War. They were also instrumental in the development of the Trans-Alaskan Pipeline System, or TAPS, which ran from Prudhoe Bay to Valdez, Alaska. TAPS was an innovation in its own right, as the development brought with it myriad obstacles, namely permafrost. It was the first American pipeline which had to traverse isolated, frozen landscapes, and therefore required specially developed manifolds to withstand freezing temperatures.

In 1974, the Price Company Tower was added to the National Register of Historic Places and today the ‘Prairie Skyscraper’ hosts an art center, an inn and restaurant all under its roof. 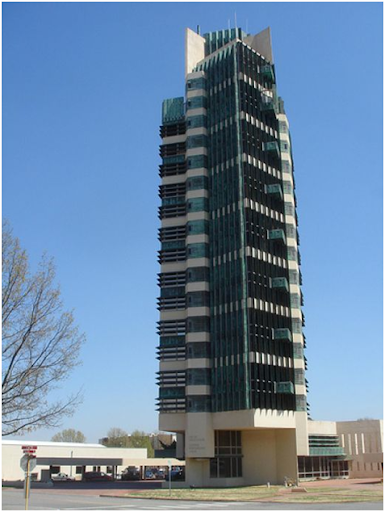 Nevada finally becomes a commercial oil producing state in 1954 after decades of failed drilling attempts, beginning with an almost 2,000 ft attempt in Washoe County, Southwest of Reno in 1907. Shell Oil Company, famous the world over, struck oil on its second sortie into its Eagle Springs No. 1 Wellin Railroad Valley.

Starting out as a routine test, Eagle Springs bore more fruit than could ever have been expected, when it became a discovery well for the Railroad Valley Field— Nevada’s first significant oil field. More than 3.8 million barrels of oil came from Railroad Valley, while other oil fields of significance in Nevada were not easy to find.

It would not be until 1976, more than two decades after the discovery in Reno, that another discovery would be made that resulted in commercial production. It was the work of the Northwest Exploration Company, with Trap Spring No.1 who made the discovery a whole 5 miles to the west of its Eagle Spring sister.

After three years held up in court, a jury in the 1st District court of Houston upheld a decision made against Texaco Inc. for initiating a takeover of Getty Oil, following what was deemed a viable, binding agreement for Pennzoil to take control of the company.

On February 12th, 1987, Pennzoil was awarded the largest single settlement in American judicial history when they won a suit against Texaco Inc. The lawsuit took over three years of court proceedings until a jury in the 1st District Court of Houston upheld their decision.

Pennzoil was suing Texaco Inc. for initiating a takeover of Getty Oil, following what was deemed a viable, binding agreement for Pennzoil to take control of the company.  The interference, deemed deliberate by the jury, awarded $10.53 billion to Pennzoil in damages. This would later be settled for $3 billion in punitive damages.

According to a 1985 LA Times article, the outcome of the suit would set forth the standards and practices of morality in American business for years to come. It would dictate a plan that would restructure and guide how Texaco would act in the case of bankruptcy proceedings, which was a refuge sought to prevent Pennzoil from attaining the entirety of the revenue from the settlement.