This Week in Oil and Gas History: January 16 – January 22 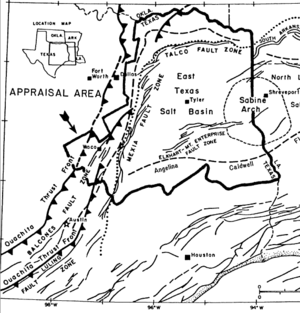 The East Texas Oil Field is the second largest in the lower 48 states and has produced the most oil since its discovery.

World War I had created a huge demand for oil and gas, and even when the war ended, the demand continued well into the post war-years. Oil wells were being drilled all over North Texas as speculators sought to cash in on the boom.

Oil men tried to buy up the rights to every part of the landscape that might contain petroleum. They even attempted to buy the drilling rights for the Merriman Baptist Church’s cemetery for $100 million. Drilling would require the disinterring and moving of corpses and the congregation voted to turn the offer down. They even put up a sign telling the oil men to ‘Respect the Dead.’

The cemetery, which has never been drilled on, still exists near a modern church building. 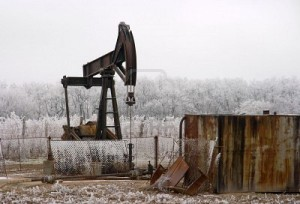 Low producing, or stripper, wells are designed to continue pumping oil after the reservoir’s pressure has fallen.

In another of a long line of dire predictions, the U.S. Geological Survey prognosticates oil reserves running dry sometime in 1940, causing widespread panic. There have been many projections that claim an end to the oil supply over the years, and this marked one of the biggest panics insinuated by one of these predictions.

However, as oil exploration continued and the true size of petroleum reserves has come to be understood, these “predictions” started holding less weight.

The first of these predictions actually took place in 1879, when the state geologist of Pennsylvania predicted that there was only enough oil to produce kerosene for an additional four  years. Other such predictions include the Model T Scare of 1916, a scare during the Cold War and caused major concern at a time where the US believed they needed oil the most. 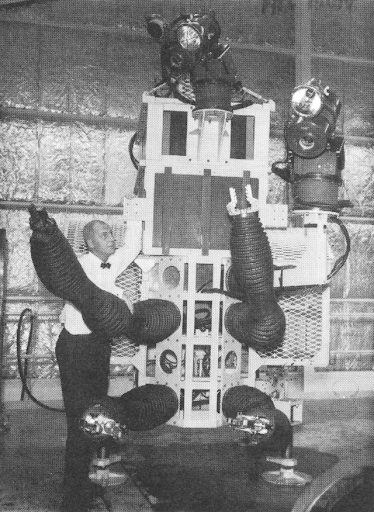 Howard Shatto is standing beside his invention, the Mobot.

In 1965, Howard Shatto patented the first remotely operated underwater robot, a remarkable invention that would go on to change offshore drilling efforts forever. Dubbed the ‘mobot’ — for manipulator operated robot — it was described in the patent as an underwater manipulator with suction support device. 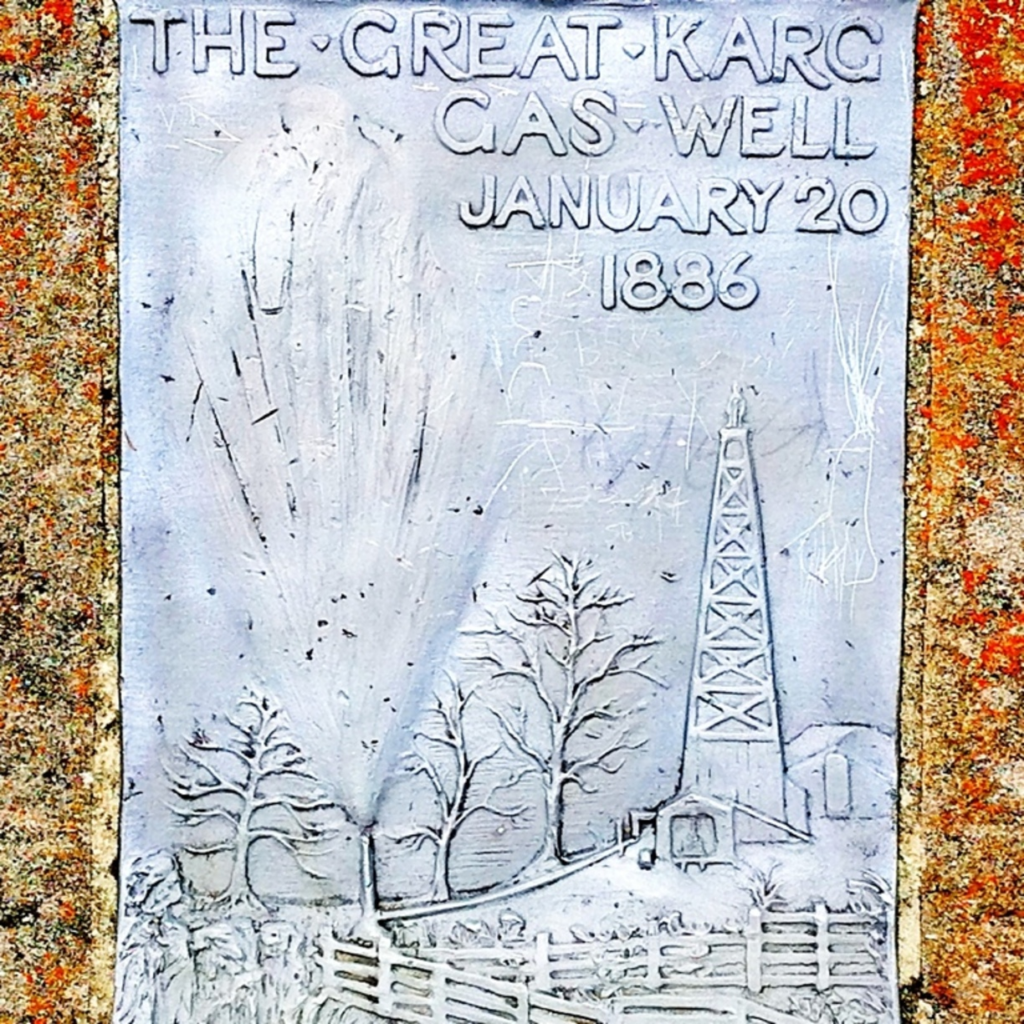 This plaque, located in Findlay, Ohio, commemorates the discovery of the Great Karg Well.

The pressure at the Great Karg natural gas well in Findlay, Ohio builds to more than the technology of the time can handle. The well erupted with natural gas and the flow was initially over 10 million cubic feet in one day. The gas caught fire, becoming a pillar of flame that burned for four months straight. The flaming well served as a tourist attraction for the area.

The Great Karg well was not the first natural gas well drilled in Ohio, but it was the largest of its kind. It also launched a boom that brought people and businesses to the areas. In particular, the cheap cost of natural gas caused by the boom attracted glass companies. Bottle makers, a light bulb manufacturer, and a tableware glass maker, among others, all eventually opened factories in Findlay.

January 21, 1865 – Oil Well Torpedo Is Demonstrated For The First Time 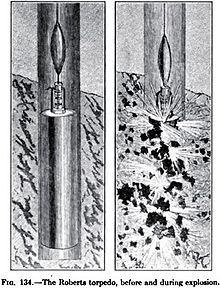 The torpedo developed by Edward Roberts explodes to force open the cracks in the surrounding rock, fracturing it to improve the flow of oil to the well bore. This was an early form of what has become known as ‘fracking.’

The first ever oil well torpedo was introduced to the world in 1865 when Col. Edward Roberts began his experiments in hopes of improving oil production. This involved using controlled explosions at the bottom of a well, exploding a ‘torpedo,’ or metal casing full of black powder.

This first experiment took place deep in a well in Titusville, Pennsylvania.

The experiment improved the production of the well, going from just a few barrels a day to over 40. The process became known as ‘shooting a well.’ Later, nitroglycerin became a more common explosive due to its effectiveness, despite its instability. Roberts patented the invention, which used an iron tube filled with an explosive. The well was filled with water to prevent the explosion from escaping up the well.

This early form of fracking was used to remove paraffin buildup in the bottom of the well. Earlier methods for dealing with this problem involved pouring dangerous chemicals, such as benzene, into the well to dissolve the buildup.

January 22, 1861 – Kerosene Refined In Pennsylvania For the First Time 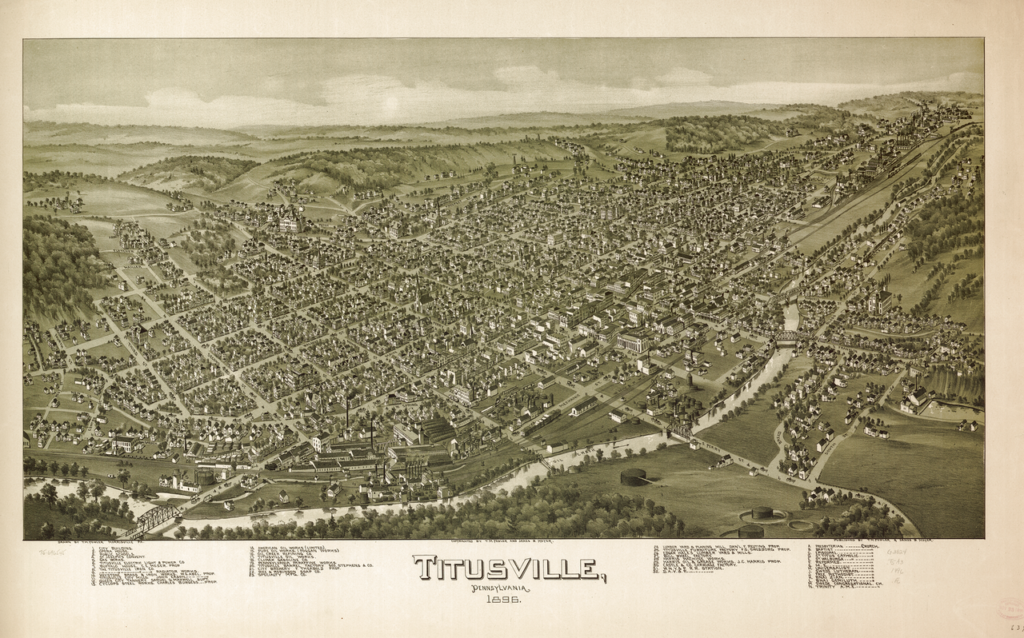 This panoramic view of oil boomtown Titusville, Pennsylvania was drawn by Theodore Fowler, who drew similar views of many boomtowns.

A new type of refinery using multiple stills was built in Pennsylvania near the oil boom town of Titusville. The refinery was designed to produce kerosene, used for illumination at that time. It would produce both the purer white kerosene and a less expensive yellow kerosene. The refinery’s efficiency was low compared to modern versions, one barrel of crude producing only 20 gallons of refined kerosene.