This Week in Oil and Gas History: January 2 – January 8 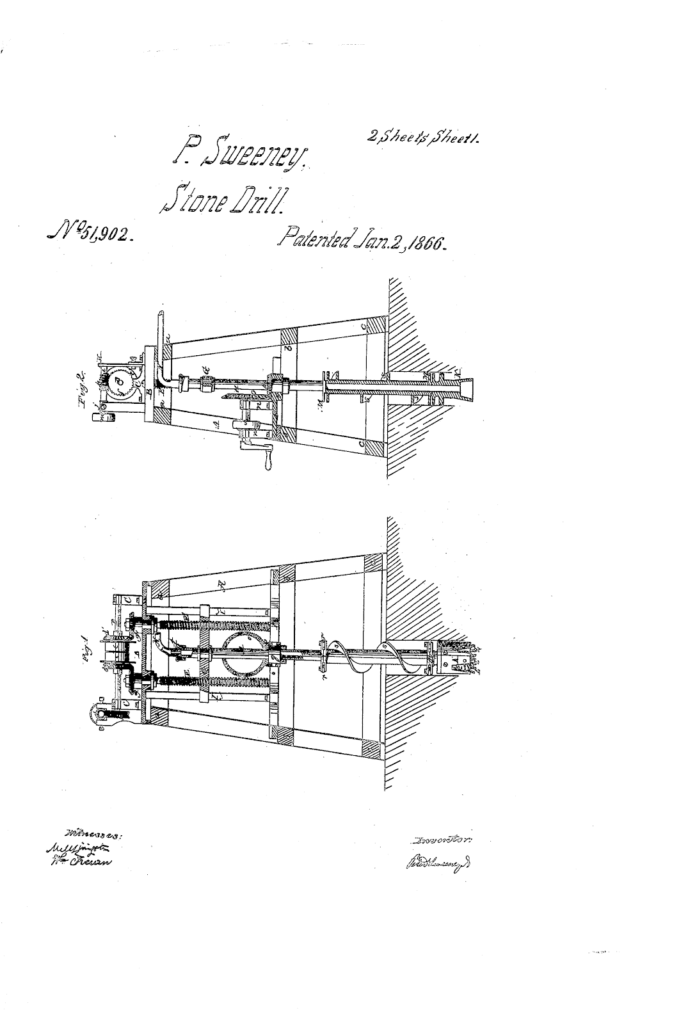 Pictured here is a drawing of Peter Sweeney’s patent.

In 1866, Peter Sweeney patented the first rotary drill, a design meant to be an improvement on an earlier creation from Britain’s Robert Beart. This device includes many basic aspects of modern drill rigs that are still used today. Aptly titled Improvement in Rock Drills, this piece included a roller bit and replaceable cutting wheels. The drill head was designed to be turned rapidly so that the cutting wheels cut into the rock and produced a clear hole. The hollow drill-rod, the equivalent of modern drill pipe, allowed steam or water to be piped to the bottom of the hole so that it could be kept clear.

The rig was intended for drilling deep holes. Edwin Drake had drilled the first commercial oil well only a few years earlier, but Sweeney’s rock drill improved many of the shortcomings of this original design, and would be used extensively in many oil booms around the country.

While the Sherman Antitrust Laws were still a few years off, many states began passing laws against monopolistic companies. In response, John D. Rockefeller reorganized Standard Oil, which owned most of the oil production and transportation companies across the country, into a trust. The Standard Oil Trust in turn owned 40 different affiliate companies, through which it continued to control most of the oil business in the United States.

Because of the Standard Oil Trust, and the anti-competitive practices that its control allowed, the idea of a ‘trust’ became associated with monopolies. The trust was eventually broken up by a Supreme Court ruling in 1911.

The iconic orange 76 ball was introduced at the 1962 World’s Fair in Seattle.

On January 2nd, 1932, the Union Oil Company unveiled the now infamous ‘76’ brand gasoline at gas stations across the Western United States. The number was a reference both to the octane rating of the gasoline and to the 1776 U.S. Declaration of Independence. The orange ball ‘76’ logo that so many recognize was created for the 1962 World’s Fair in Seattle, Washington. Millions of smaller versions of the logo were given away as car antenna toppers in an effort to create publicity for the gas brand.

When ConocoPhillips began rebranding 76 stations in 2005, many of the orange balls were taken down. In response to a ‘Save the 76 Ball’ campaign, they reversed the decision and put up countless new balls in the new brand colors. 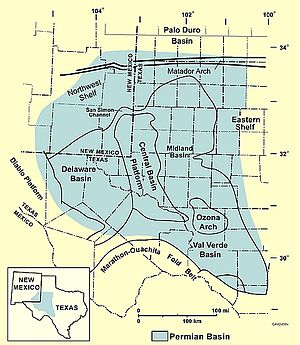 The Permian Basin is a complex geological formation made up of several component basins and platforms.

In 1948, when an exploratory well hit oil in west Texas, it unveiled the potential for the upcoming Texas oil boom; and lead to a greater focus on the area’s potential for oil production. While there had been many attempts to find oil in the area over the years, this was the first successful wildcat well.

Slick-Urschel Oil Company drilled the well southeast of Midland, Texas to a depth of 12,000 ft.. Michael Benedum had drilled the first 10,000 ft in less than six months, but delayed his efforts when he ran into hard rock. With the help of Tom Slick, Jr., a whipstock was used to create a branch off the well in order to reach the oil in the limestone. When oil began flowing, more drillers began to see the potential the Lone Star State would hold.

A view down Holmden St in Pithole, Pennsylvania. The street was named for Thomas Holmden, the owner of the farmland where oil was discovered, as well as where the town would come to be built.

When Isaiah Frazer and four other investors formed the United States Petroleum Company, they planned to drill exploratory wells throughout Pennsylvania in hopes of striking oil. Just five years earlier, Edwin Drake had drilled the first commercial oil well in nearby Oil Creek and the newly-formed company was looking for similar luck. Frazer and the others had taken a chance on the rougher landscape of Pithole Creek, in hopes of finding their own paying well.

The Frazer or United States No. 1 Well struck oil January 7, 1864. According to several reports, the site of the well was chosen using a dowsing rod. When the oil began to flow, this well began fueling the creation of a town that would boil up to a population of 20,000 in less than a year.

However, the growing town wouldn’t last long. In just 13 years, the town’s charter would be annulled and Pithole, Pennsylvania was essentially abandoned.

A postcard showing oil being taken by wagon from the oil field in Humble, Texas.

The town’s population would go from under 1,000 to almost 20,000 in just a few months. Humble eventually produced over 15 million barrels of oil in the year of the boom alone. The oil field had a high production for many years, leading to the formation of the Humble Oil and Refining Company in 1911. It would be bought by Standard Oil and eventually become part of ExxonMobil. The Humble oil field is still producing oil today.

Scientists working for Standard Oil developed the first cracking process, by using heat, to double the amount of gasoline that could be produced from each barrel of crude oil during the refining process. Cracking is the process of breaking longer hydrocarbon chains into shorter ones.

Oil was seeing a decline in demand, as electrical lighting was taking over from the previously popular kerosene lamps. However, at the same time, automobiles were coming onto the scene and creating a new type of demand, causing gasoline to becoming the more profitable petroleum product. More advanced forms of cracking would be developed in short order. 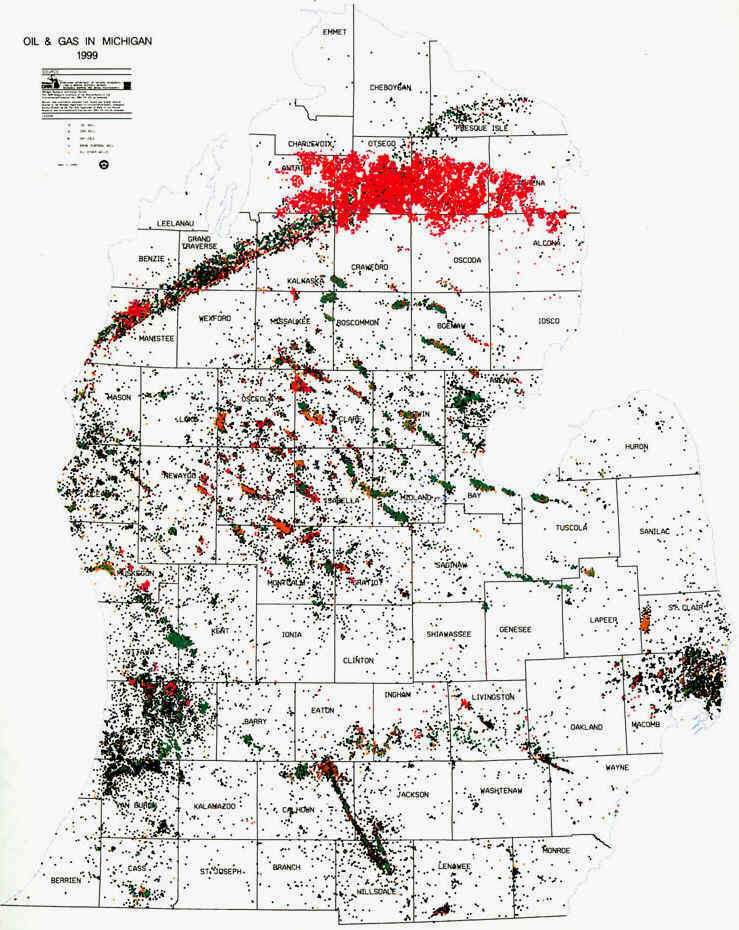 This map shows drilling activity across Michigan. The Albion-Pulaski-Scipio field, where Ferne Houseknecht struck black gold, is the black line in the center of the state, near the southern border.

In January of 1957, Ferne Houseknecht was juggling her farm chores when she convinced her uncle to help her drill an exploratory well on her farm. It took over two years to pick away at the well, as Ferne had been convinced by a fortune teller that there was oil beneath her dairy farm.

The Houseknecth No. 1 Well hit oil at just over 3,500 ft, revealing the Black River formation, an oil producing zone in the southern part of Michigan. The discovery led to an oil boom and further drilling the area, producing over 100 million barrels of oil and a quarter million cubic ft of natural gas. The formation that Mrs. Houseknecht discovered is still producing petroleum today.