This Week in Oil and Gas History: January 23 – January 29 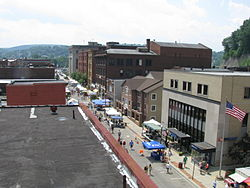 The downtown commercial historic district was added to the National Register of Historic Places in 1997.

Standard Oil had an incredible amount of power in the early years of oil production in the United States, controlling nearly ¾ of the producing and refining potential. This allowed the purchasing agents for Standard Oil to set the price at which they would buy oil from independent producers, rather than the price set by the open market.

Oil exchanges were markets that specialized in trading in oil speculations. However, when petroleum giant Standard Oil began to control the overall price for oil, there was little money to be made by investing in oil prices. Standard Oil’s purchasing headquarters in Oil City, Pennsylvania became the third largest financial exchange in the United States behind the New York and San Francisco Stock Exchanges.

Ultimately, this caused Standard Oil to run a monopoly on the market, as all other oil exchanges ended up shutting down operations. 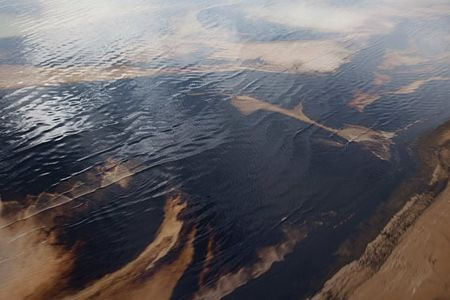 The oil slick created by the Gulf War oil spill was over 100 miles wide and 5 inches thick.

While there have been several large oil spills in recent years, the largest in the world was back in 1991. This disaster occurred when retreating Iraqi soldiers opened pipeline valves on the Kuwaiti coast in hopes of preventing US Army forces from landing.

The total estimated amount of oil spilled varies depending on the source, but it was anywhere between 6 and 11 million barrels. Most of that oil ended up in the Persian Gulf. During the war, several hundred Kuwaiti oil wells caught fire. It would take months before the last of these fires was eventually put out. 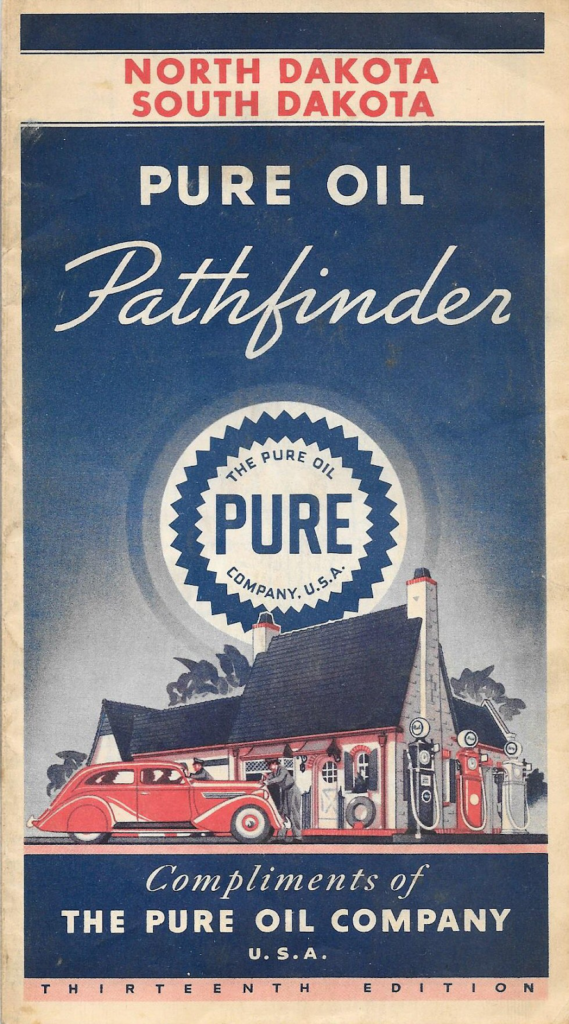 Starting in the late 1920’s, it became common practice for gasoline companies to offer free road maps with the locations of their service stations marked.

In 1895, oil producers, refinery owners and pipeline operators all came together to form the Pure Oil Company. They did this in order to effectively compete with Standard Oil who ran the entire exchange industry at the time.

Standard made a practice of vertical integration, meaning that they controlled as much of their production and transportation as possible. Standard drilled their own wells, owned their own pipelines and refineries, and even made their own barrels. Pure followed their example, becoming the second vertically integrated oil company in the United States.

Pure successfully competed with Standard Oil, selling kerosene in several cities in the eastern United States and breaking their monopoly. Pure Oil would later be bought by Ohio Cities Gas Company, which would adopt the Pure brand. 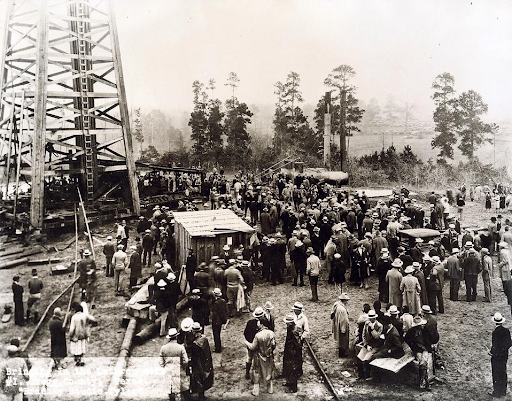 A crowd gathered at the Lathrop No. 1 Well as it neared completion, expecting a gusher similar to the other two that tapped into the East Texas Oil Field.

While the East Texas Oil Field was expected to be quite large, the true size of infamous field was not revealed until the Lathrop No. 1 Well struck oil miles north of two other high producing wells. The wildcat well was the work of Monty Moncrief, an independent operator out of Fort Worth. The Lathrop No. 1 Well produced over 7,000 barrels a day.

The two earlier wells that helped create this trifecta were the Daisy Bradford No. 3 Well that had been completed a few months earlier, and the Lou Della Crim No. 1 that was completed only a few days after Christmas, 1930. 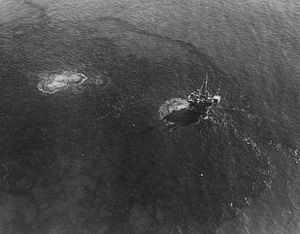 An aerial view of the oil platform and the spill. After the spill was stopped at the surface, the pipe at the seafloor began to leak oil. The bubbling water to the left of the rig is caused by this underwater leak.

An offshore drilling rig ran into a problem while replacing a drill bit causing a devastating spill along the California coastline. The mud used to keep pressure on the well ran low resulting in a blowout that ultimately spilled tens of thousands of barrels of oil. The oil slick spread six miles to the southern California coastline, coating beaches and marine habitats. The spill was controlled after only 12 days, but in that time thousands of birds and marine animals were killed in the process.

The spill ultimately helped to turn public opinion against offshore drilling. It also was part of the motivation for creating the Environmental Protection Agency the following year. Continued study of the oil seeps in that area has led to the discovery that the natural pressure forces tons of oil out into the environment every day. Oil drilling and exploitation has relieved some of that pressure, reducing the amount of oil that comes from the seeps. 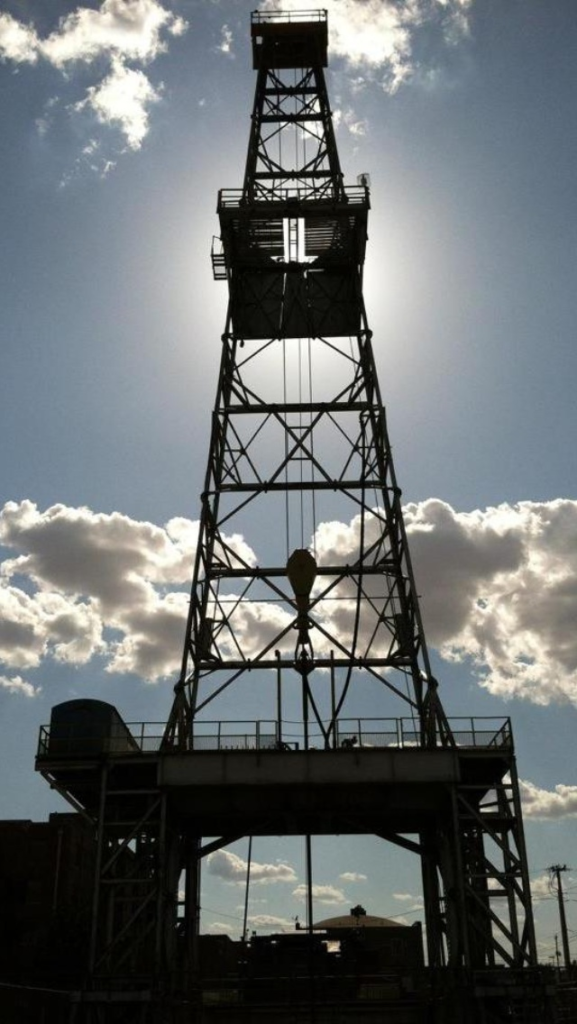 When it was originally constructed in the 1960s, the Parker Rig No. 114 was one of the largest drilling rigs in the world. It was created to drill deep wells to test nuclear bombs. However, the rig was eventually used by Parker Drilling to dig some of the deepest oil wells using conventional drilling methods, reaching as far as 4 miles down.

The rig was used specifically to drill wells into the Anadarko basin, an oil bearing geological formation below Oklahoma and Texas. More recently, it serves to attract tourists to Elk City, Oklahoma. 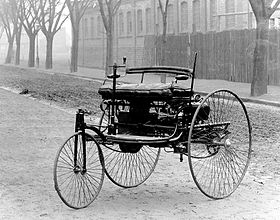 Karl Benz’s wife financed the development of the original motor wagon. Technically, that would have given her rights to the patent. However, in 1885 Germany a woman could not apply for a patent.

The Benz Patent Motorwagen, considered to be the first true automobile, revolutionized automobile engines when it utilized gasoline for internal combustion. Developed by Karl Benz, from Mercedes Benz, the engine used a four stroke, single cylinder model, and it was mounted on a three-wheeled chassis. Until that point, automobiles had used steam or electric power.

Karl’s wife, Bertha Benz, financed the car and was the first to drive it over a long distance. While it meant she technically should have owned the patent, women couldn’t own patents in Germany at the time. While Karl ultimately got the rights to the patent, the feat would bring worldwide attention to the German engineer’s invention and the potential for the German auto industry.