This Week in Oil and Gas History: January 30 – February 5

On January 31, 1888, oil scout Justus McMullen officially passed away from pneumonia at the age of 37. The civil engineer hailed from Cornell University and had been scouting data from the Pittsburgh Manufacturers Gas Company Well at Canonsburg. The scouts, known at the time as ‘Riders on the Hemlock,’ braved deadly conditions to debunk rumours about oil production reports—often under the watch of armed guards.

McMullen was not only a scout but the creator of a newspaper in Bradford, PA called The Petroleum Age. This publication was vital to early oil field production, as his detective work (which was reportedly almost always reliable) would ‘demystify’ reports of production where there was none. This would prevent feverish investors, blinded by the prospect of succeeding in the oil boom, from being duped out of their oil certificate investments.

In the wake of conflicting reports about the Canonsburg Well, McMullen set out to investigate for himself. Already sick at the time, McMullen was not satisfied with the hearsay evidence coming from the producers and set out through the night to gauge the flow from the well, if any at all. He stayed there for hours, chilled to the bone and was able to eventually gather the required information, which he brought home and dictated to his wife from his deathbed.

While tips, misinformation and rouses continued to cause the market to behave erratically, McMullen’s diligence paid-off posthumously when Standard Oil declared to its subsidiaries that oil certificates were no longer to be sold, and that the market would be dictated by predetermined prices, set by its own reading of the industry’s supply and demand quotients. 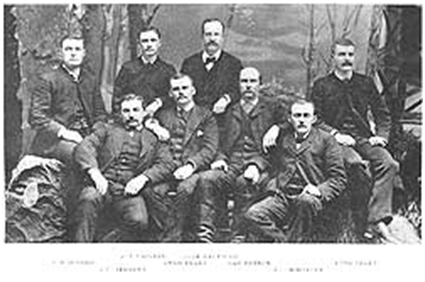 ‘Riders on the Hemlock’ as they were known, or oil scouts. Publisher, writer and detective Justus McMullen seated bottom right.

The Petroleum Club of Houston on January 31st, 1945 under the vision of Wilbur Ginther, Howard C Warren and Harris Underwood. The Petroleum Club of Houston was founded following the ‘Security of the Clubs’ charter by the state of Texas. The group originally met on the top floor of the Rice Hotel, downtown, where they curated the idea of a club of independent men in the oil industry to have an exclusive meeting point to discuss the future of their industry in Texas. To this day, deals done here are sealed with a handshake, and this system epitomizes the tradition, honor, integrity and fraternity within the council.

Soon the growing club outgrew the top floor of The Rice Hotel and in 1963 they moved to the 43rd and 44th floor of the Exxonmobil Building. This is now home to some of Houston’s most prestigious and sought after social events. And in January 2015, now claiming well over 1200 members, the Petroleum Club of Houston opened another chapter in Houston which meets at the Total Plaza at 1201 Louisiana Street. The new facility was designed by leading Houstonian architectural firm, Kirskey architecture.

Vintage postcard of the Rice Hotel in downtown Houston Texas

On February 1, 1868, it was announced that crude oil would be price-quoted based on specific gravity, marking the beginning of the end for oil exchanges. The new method involved comparing the heaviness of the substance against that of water. Newer oil regions in the North-East, such as in Pennsylvania, saw producers meet often to sell oil shares while arguing and fixing prices. The change to a standardized measurement was bemoaned by beneficiaries as “taking the fun out of the prospecting market” and “killing a great industry.”

In the modern age, the American Petroleum Institute (or API) uses its own gravity metric, which is now the international standard for measuring the gravity of the oil. Now we measure oil as light, medium and heavy; relative to its viscous gravity.

In 1923, the first ever “anti-knock” gasoline hit the market in Dayton, Ohio, and while it would be short-lived this gasoline would change the gas industry forever. Early on in the development of internal combustion engines, an issue arose called ‘knocking’, which created a loud “knocking” noise and problems in the cylinders.

The main issue occurring was out-of-sequence detonation of the gasoline and air mixture in the cylinder itself. The damage caused by the volatility of the knock would badly damage engines, so research chemists at General Motors, Thomas Midgley Jr. and Charles F. Kettering determined that there were beneficial components in tetraethyl lead that would aid in the anti-knocking process. In fact, with the addition of tetraethyl lead to the engine, the knocking abruptly stopped.

“Ethyl” as the product became known, was the world’s first anti-knock gasoline and was available at the Refiner’s Oil Company service station in Dayton, Ohio. It was popular among motorists and vital to the US aviation effort during the Second World War. Unfortunately for Ethyl, her life was short lived, because in 1950 geochemist Dr. Clair Patterson determined that the level of toxicity in Ethyl was much more grave than the researchers, executives and lobbyists had previously led the public to believe. 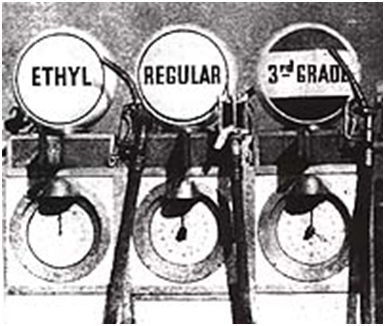 Ethyl sits alongside regular and 3rd grade fuel for sale. It wouldn’t be long before it was off the market altogether.

Less than a year after Robert E. Lee surrendered the last major Confederate Army to Ulysses S. Grant, disgruntled refiners from Pennsylvania met and passed a resolution demanding the immediate repeal of a war tax that placed an extra $1 on each barrel of refined petroleum.

From almost the beginning of the war, Treasury Secretary Salmon P. Chase  was looking for ways to drum up finances. He had advocated for duty as much as ten times the $1 tax, more precisely, he wanted a tax of $6.30 on crude oil and $10.50 on refined product.

In spite of the Union’s financial requirements during the Civil War, a $1 tax was added per barrel. Chase, prior to being appointed Secretary of the Treasury under Abraham Lincoln, in fact ran against Lincoln at the primary stage of the election, but supported him for the presidency.

Known best for his globetrotting Wild West Show, Buffalo Bill, also known as William Cody, was arguably the most recognizable man in the early 1900s. Not satisfied with this level of success, he looked to extend his legacy into the world of oil, starting when he founded a town, which he named after himself.

Cody, Wyoming was set up in 1896 after Bill purchased 7,500 shares of the Shoshone Oil Company. Accompanied by United States Representative of Wyoming, Frank Mondell, Cody began exploring near his township. The maiden drilling—a 500ft foray—was unsuccessful, and the second drilling was similarly unfruitful. The two ultimately ran out of money when the second well also turned up dry.

Almost a decade later, the two paired up again, forming Shoshone Oil, and on one trip to New York the pair was said to have carried hip flasks of oil in order to tempt investors. Unfortunately for Cody, Mondell and their enterprise, all of the significant oil discoveries (such as the Salt Creek oilfield) were made further south, and as Shoshone’s financial situation grew worse, the company’s drilling funds dried up and the company went out of business. 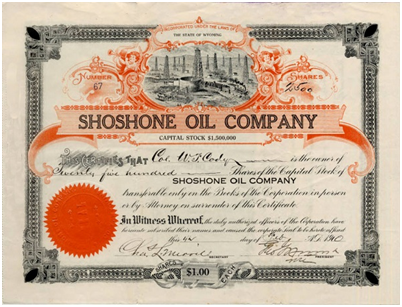