This Week in Oil and Gas History: January 9 – January 15

Barrels similar to these would have been used to transport oil on board the Elizabeth Watts.

In 1862, America exported petroleum for the first time, marking the beginning of centuries of oil exportation in the United States. The oil traveled on the brig Elizabeth Watts which traveled from Philadelphia to London in a harrowing six week trip. Ship carried over 1300 barrels of oil and kerosene extracted from oil fields in Pennsylvania.

At the time, the mission was seen as a very dangerous one, as there were fears that the brig would blow up carrying its explosive cargo. However, the Elizabeth Watts arrived safely in England. A year later, over 200,000 barrels of oil had been shipped out of the port of Philadelphia. It would be decades before specialized equipment for carrying oil and petroleum were invented. 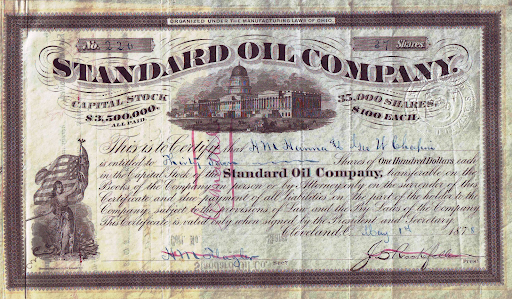 A share certificate for the Standard Oil Company. In 1882, four years after this certificate was issued, Standard Oil would be reorganized into a trust in response to government efforts to limit the size of companies.

In 1870, John D. Rockefeller officially incorporated the Standard Oil Company, the world’s largest oil juggernaut. Initially based in Cleveland, Ohio, a large part of the company’s plan involved controlling as much of its business as possible while reducing costs for customers. Standard Oil cut its own timber, transported the cut logs, and used it to make their barrels; a move that allows them to cut their costs per barrel in half.

Scientists working for Standard Oil would also develop a process to increase the efficiency of the refining process. The company was well known for undercutting local businesses and buying them up, eventually coming to control the vast majority of U.S. oil refining and transportation. 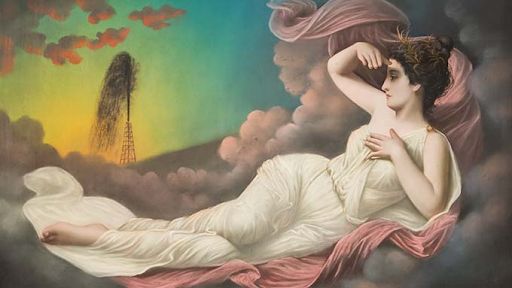 This painting, entitled ‘Spindletop viewing her Gusher,’ was painted by Aaron Arion and commissioned by George Washington Carroll. Carroll was one of the original investors in Gladys City Oil, Gas, and Manufacturing Company. He was also the Prohibition Party’s candidate for Vice President in 1904.

On January 10, 1901, Captain Anthony F. Lucas struck oil on top of Spindletop HIll in Beaumont, Texas, in a move that would set the entire Texas oil boom in motion.

The Lucas Gusher, as it came to be known, is one of the most significant oil discoveries in the United States. The Spindletop oil field produced over 3 ½ million barrels in its first year. After 1902, however, production began to decline until the Yount-Lee Oil Company had another major oil strike in 1925. The discovery of the Spindletop oil field is also said to mark the beginning of the modern oil industry. 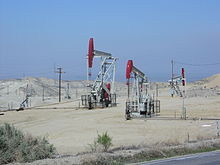 The Elk Hills oil field isn’t only one of the highest-producing fields in the area, but also one of the oldest and has been active for over a century.

When oil was discovered in the San Joaquin Valley in Kern County, Southern California quickly became a highly productive area for petroleum. The Elk Hills oil field, one of the first major discoveries of the region, was leased, at the time, by Secretary Albert B. Fall to Harry Sinclair. The lease became the subject of a Senate investigation and led to the Teapot Dome Scandal.

The Elk Hills Field is close to Midway Sunset Oilfield, which is currently the largest in California. 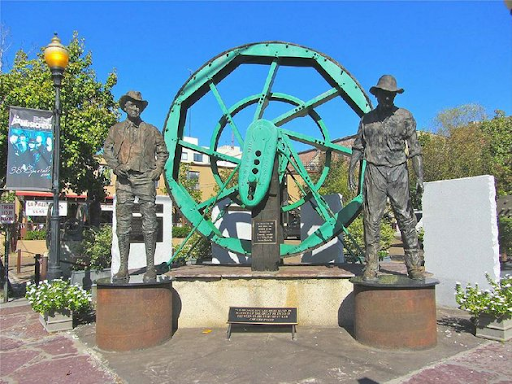 In downtown El Dorado, Arkansas, this memorial to the boomtown years is part of the Oil Heritage Park. The statues commemorate the friendship of oil magnates Charles Murphy and Chesley Pruet.

1921 was a good year for the state of Arkansas, the Busey-Armstrong No. 1 well was spewing a fountain of oil, gas, and water and the oil field surrounding it would soon lead to a boom that would make Arkansas the leading oil producer in the country. In 1925, the field itself would be the leading oil producer in the United States as that year alone, 70 million barrels were pumped by wells near El Dorado.

This all happened when H.L. Hunt arrived in El Dorado, Arkansas to take part in the oil boom with just $50 of borrow money in his pocket. Hunt would eventually come to control large portions of the East Texas Oil Field, becoming one of the richest men in the world at the time. He fathered over a dozen children, was implicated in JFK assassination conspiracy theories, and provided the inspiration for the long running soap opera Dallas. 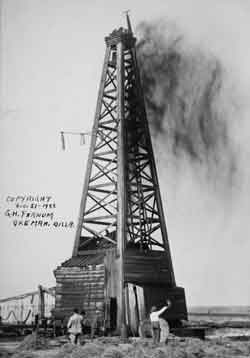 This well near Borger, Texas, tapped into one of the largest oil fields in North America.

The town of Borger, Texas got its official start in 1926, when the Dixon Creek Oil and Refining Company completed the Smith No. 1 Well struck oil. Located in Hutchinson County, Texas, the well produced 10,000 barrels a day, leading to an oil boom and the founding of the Texas town.

A.P. “Ace” Borger, leased a large tract of land in the area and received a grant from the Texas Secretary of State to build a town near the profitable well. He had experience putting together boom towns, but Borger proved to be one of the fastest growing ever established. The town, which Ace named after himself, grew to a population of over 10,000 in just a few months. In addition to dividing and selling plots of land for construction, Ace also built hotels, a lumberyard and the town’s first bank within the town’s limits.

The town still celebrates its history with an ‘Oil Boom Heritage’ festival every spring. 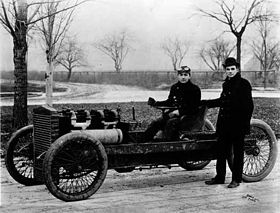 In 1904, Henry Ford was having trouble raising money for his first production car, the Model T. In order to get a little positive publicity, Ford raced across a frozen Anchor Bay in Lake St. Clair, drumming up attention from many spectators. With Ford driving and his mechanic Ed Huff operating the throttle, the car set a record speed of over 90 miles an hour. Ford only held the record for a few weeks, but that was enough to help him raise the funding he needed for the new model.

The automobile was essentially a huge engine on wheels, steered using a basic, pivoting metal bar. The car was said to produce anything from 70 to 100 horsepower and before setting the speed record, the Model T had won several automobile races. It was the proceeds from the car’s first race that allowed Henry Ford to start his automobile company. Ford sold his stake in the car to Barney Oldfield, but retained publicity rights and one of the world’s most notable auto companies was born. 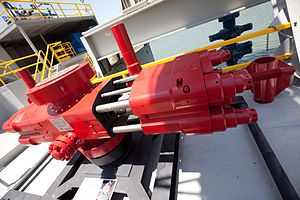 While a gushing oil well is picturesque and a classic image from the early days of oil drilling, oil spraying out of the ground at this high of pressure was both wasteful and dangerous. In 1926, in an effort to help prevent the kinds of “blow outs” that led to gushers, two men introduced the ram-type blowout preventer. It was a device that would save millions of dollars and change the drilling industry for ever.

James Abercrombie brought his idea to a machine shop operated by Harry Cameron and the two designed the device together.. Essentially, when a well blew out two ‘rams’, or hydrostatic pistons, would close around the drill stem. This would close the top of the well and prevent the characteristic gushing of oil, water and gas.

January 13, 1957 – The First Frisbees Are Made From A Petroleum Product 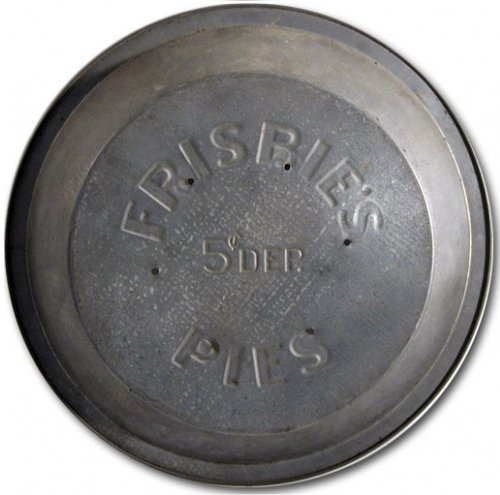 The original Frisbees were pie tins from the Frisbie Pie Company of New Haven, Connecticut. After eating the pie, students from the nearby Yale and Dartmouth would toss the tins around. ‘Frisbie’ became a common term for flying discs used to play games.

The year 1957 saw the first ever Frisbees made from petroleum products. The original Flyin’ Saucers were sold by Partners in Plastic, but the toy really became a big hit after Wham-O bought the rights and released the Frisbee in 1957.

Wham-O made their discs from the new material that had been invented at Phillips Petroleum, a high density polyethylene that was marketed as Marlex. This petroleum product allowed Wham-O to meet the large demand for the number of Frisbees required by the toy’s wild popularity. In 1958, Wham-O released another toy made from Marlex, the Hula Hoop. 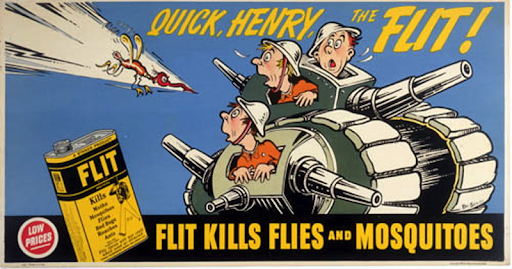 Theodore Geisel created many catchy and memorable ad campaigns for Standard Oil. This ad for Flit bug spray was his first.

It’s hard to think of Dr. Seuss as anything but a beloved children’s author. However, his characteristic style was first put on display in advertisements for Standard Oil. Before switching to his now-infamous pen name, the then Theodore Geisel worked for many years creating advertisements for various Standard Oil subsidiaries.

His first big campaign was for Flit bug spray and featured Seuss’ unique drawing style. The tagline, ‘Quick, Henry, the Flit,’ became a common phrase throughout the U.S. and around the world. Geisel worked for the large petroleum company during the difficult years of the Great Depression, when paying work for artists was hard to find. Geisel would continue to produce hundreds of ads, developing his artistic style along the way. Geisel also credited his time working with Standard Oil as teaching him how to put words and pictures together, a skill he would use to create classic children’s tales.