This Week in Oil and Gas History: November 14 – November 20 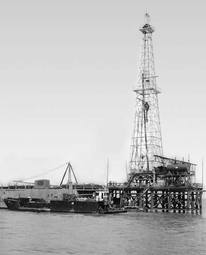 The drilling platform called Kermac 16 would go on to produce oil for nearly forty years after it was first drilled.

This offshore drilling platform, known as the Kermac 16, was the first of its kind, located 10 miles from shore, out of sight of land, in the Gulf of Mexico. Built by Brown And Root Company, it rested on pilings sunk over 100 ft into the sea floor and stood in 20 ft of water. It was built to stand up to gale force winds and would be put to the test barely a week after it had begun operation, withstanding a Category 5 hurricane.

Daniel Kerr of Kerr-McGee was behind the construction, with financial backing from Stanolind and Phillips Petroleum. At the time this was a unique drilling platform and required specialized equipment for drilling offshore. Kerr also purchased a number of surplus military vessels and other supplies to provide crew quarters and equipment for the rig. It would cost nearly nearly half a million dollars to complete the experimental drill rig, but the investment would turn out to be well worth it. 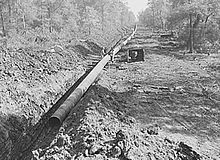 The Big and Little Inch Pipelines were built during World War II as an emergency measure to bring oil from Texas to the East Coast.

The Big and Little Inch pipelines were built during World War II to protect oil produced in Texas as they were transported by tankers vulnerable to German submarines. After the end of the war, this pipeline was put up for sale to a private company. The private company that would take advantage of this offer was the Texas Eastern Transmission Corporation. It had been formed less than a year earlier with the specific purpose of buying the pipelines and would go on to pay over $140 million dollars for the two pipelines.

As part of the terms of the sale, both pipelines were converted to transporting natural gas. Ten years later, the smaller Little Big Inch would revert to transporting oil.

November 15, 1906 – The Federal Government Breaks Up The Standard Oil Monopoly 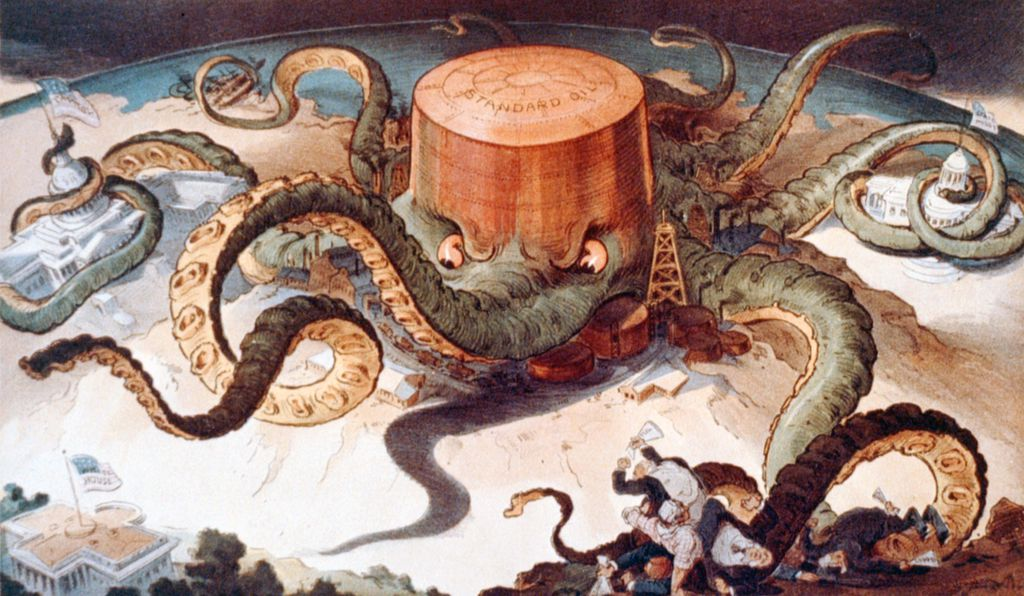 This political cartoon shows Standard Oil as a giant octopus with its tentacles encircling major industries and political institutions across the United States.

Pushed by popular demand, Charles Bonaparte, the U.S. Attorney General, decided to break up the monopolistic Standard Oil. The company had actually been ordered to dismember a decade earlier, but a reorganization had allowed it to continue operating. The lower court would grant the Justice Department’s motion, but the case would go all the way to the Supreme Court before the company would be separated into 34 different companies in 1911.

November 15, 1952 — One Millionth Barrel of Oil is taken from the Williston Basin 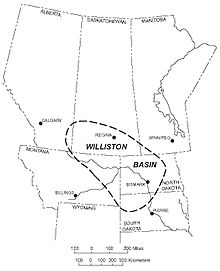 This map shows the Williston Basin, which stretches across North and South Dakota, Montana, and southern Saskatchewan.

Oil in the northern US was first discovered in Montana thirty years earlier, but did not produce large amounts until further, richer oilfields were located in the 50s.

Oil in the northern US was first discovered in Montana in the 1920s; however, it did not produce significant amounts of oil; that is until new oilfields in the area were discovered in 1952.

Amerada Petroleum led the search, starting in 1946 but did not succeed with his efforts until 1951 when major fields were located in North Dakota. The largest were located in Mountrail, Williams, and McKenzie counties and were drawing from the Williston Basin formation. After these larger fields were located, they were producing around 350,000 barrels per month. A year later, in 1952, the fields produced its millionth barrel of oil.

The United States Geological Service is a government service which studies the landscape and natural resources of the country.

In 1949, the United States Geological Survey began a project that would investigate 22 states, as well as the then Alaska Territory, to locate prime locations for petroleum exploration. The effort involved 70 geologists and used some of the most advanced technology of its time. The USGS would continue to explore and locate oil reserves, as well as other natural resources.

The United States Geological Service is a government service which studies the landscape and natural resources of the country.

While Phillips Petroleum was founded in 1917 to discover and develop new oil fields, they didn’t begin operating refineries and retail gas stations until 1927. The company offered its own brand of gas, called Phillips 66, at its first station. The name was chosen after a vehicle fueled with the new gas, and carrying a collection of company executives, got up to the, then quite high, speed of 66 mph on the historic Route 66.

The highway would soon play host to many Phillips stations, and the company would add 50 stations every month for several years. By 1930, there were nearly 7,000 Phillips 66 stations across the country.

The gas had a mix of gasoline and naphtha at a higher gravity than had previously been used. This mixture made it easier for cars to start when the engine was cold, causing the gas to specifically be advertised for winter. However, that marketing strategy was dropped in favor of promoting it year-round. 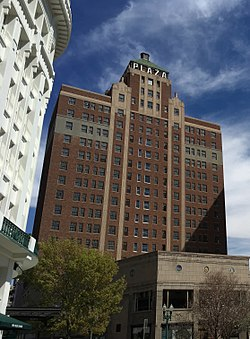 The Hilton Hotel was originally the site of the Sheldon Hotel, which was used as a headquarters for Mexican Revolutionaries.

Hilton had bought his original hotel in Cisco, Texas a decade earlier. He had originally planned to buy a bank, but when that deal fell through he purchased a hotel instead. Roughnecks were flooding the area to work in the newly-discovered Ranger oilfield, which was fueling a boom in the area and the eventual boom for the Hilton brand of hotels.

All wells are snitches: lessons learned as an Oilfield Pumper

Hey, Oil Field Pumpers! The secret to getting more wells...