This Week in Oil and Gas History: November 7 – November 13 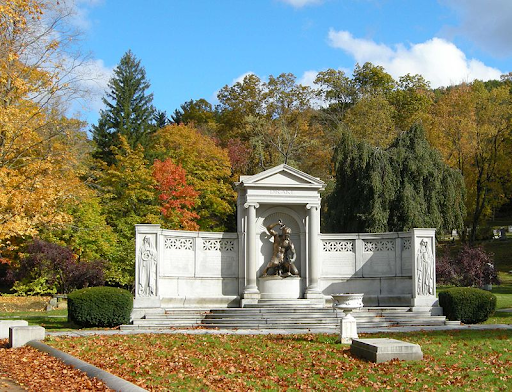 A monument located in Titusville, Pennsylvania was constructed 1901 to honor Edwin Drake.

Edwin Drake drilled just three wells in his life, but he is widely considered to be the father of the US oil industry-as he was the first American to successfully drill an oil well. Located in Titusville, Pennsylvania, it first produced oil in 1859, and started the U.S. petroleum industry. Twenty years after his ground-breaking discovery, Drake passed away in Bethlehem, Pennsylvania.

While the oil industry would bring wealth to many people, Drake invested poorly and his money was soon lost in speculation. He also never patented his innovative idea behind how to drill for oil.

Ill and living in poverty, Drake would be voted a pension for his support to recognize his achievements. Decades after his death, his contributions would finally be fully recognized. Henry Rogers, an executive with Standard Oil, would have his body re-interred in Titusville, Pennsylvania.

Once he was returned to the town where his historic well was drilled, a monument was built in Drake’s honor. The monument includes a bronze statue called ‘The Drifter.’ 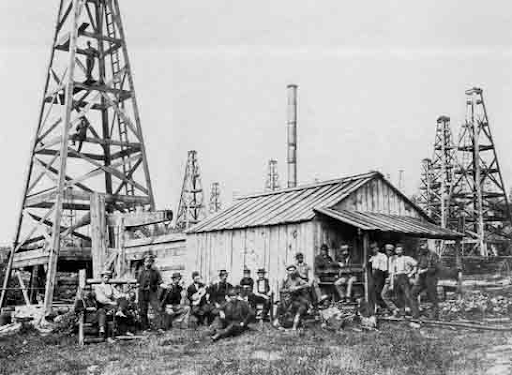 The Drake well after striking oil.

In 1854, George Bissell bought 100 acres containing oil seeps from the Brewer, Watson & Company lumber company. He believed that when oil was refined it could be made into kerosene as a fuel for lamps.

Following up on his suspicions, he asked Professor Benjamin Sillman Jr. to investigate. After Sillman confirmed that kerosene could be used as a fuel, Bissell hired Edwin Drake to drill on the sight of the oil seeps. Drake would go on to drill the first commercial oil well in the United States.

The Houston Ship Channel provides a deep water path to one of the busiest seaports in the US.

The discovery of oil, along with increased agriculture, lead to increased ship traffic into the Port of Houston and a number of issues for those trying to access the port. This is when the historic Houston Ship Channel came to life.

Dredged out of the Buffalo Bayou, it provided a wider, deeper path into the port. The swampy and overgrown area is dredged to a depth of 25 feet.

What was perhaps most unique about the opening of this channel is that President Woodrow Wilson opened it remotely from the White House, saluting and pressing an ivory button that was wired to a cannon in Houston. 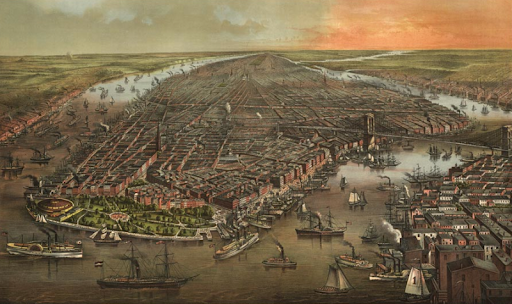 A painting of New York in 1873. Competing gas companies would often sabotage each other.

In 1884, six major companies that were servicing the gas lights in New York City came together to form the Consolidated Gas Company; which would go on to become Consolidated Edison. This was an unprecedented move as gas companies used sabotage one another in this highly competitive industry, which was often plagued with brawls over the placement and repair of gas lines.

The first of these companies, New York Gas Light Company, was created in 1823 by a charter from the state legislature. The company’s focus was a street lights, rather than home lights, and they worked to replace the whale oil fueled lamps that has been in use since the mid 1700’s.

Five other companies were eventually dedicated to serving New York City before the merger in 1884, often in heavy competition. Workers would regularly tear up city streets to lay new lines or repair existing ones, in the process taking the time to pull out the lines of rival companies. 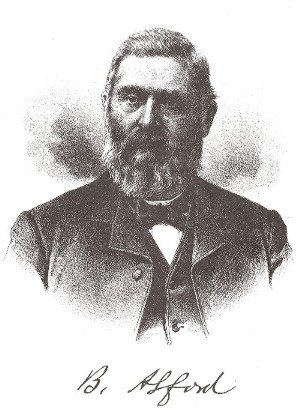 Byron Alford was an entrepreneur who counted oil, lumber, and explosives among his business ventures. When he died in 1898, his wife took over.

In 1888, when successful businessman and serial investor, Byron Alford was looking to expand his growing business empire, he decided to purchase an explosives factory.

However, when he died just one year later, his wife, Mary Alford, took over the management of the factory. She had studied the business while her husband was alive and was able to run it successfully, becoming the only woman in the world at that time to own a nitroglycerin factory. She was even profiled in a New York newspaper in an article for her work with the massive factory.

Nitroglycerin, among other things, was used to increase the flow of oil in an early form of fracking. ‘Torpedoes’ full of nitro were lowered into the well and exploded, forcing open the rock so more oil come reach the well bottom.

November 12, 1916 – The Establishment of the New Forest Oil Company

Forest Oil’s logo shows a keystone in a yellow dog lamp, and was established at the company’s founding in 1916.

When Forest Oil first opened its doors in November of 1916, the company’s innovative approach to enhancing the recovery of oil would quickly prove to be a groundbreaking move for the industry. The approach was rather simple, as it pumped water into a formation to push the oil toward the well.

This technique, called water-flooding, would quickly become common practice around the oil industry. Increasingly effective water-flooding techniques have extended the lives of some wells by many years.

Forest Oil still exists today, though it has merged with several other oil companies over the years. Its headquarters can now be found in Colorado.

November 12, 1999 – American Chemical Society Names Discovery of Plastics a Landmark in the History of Chemistry 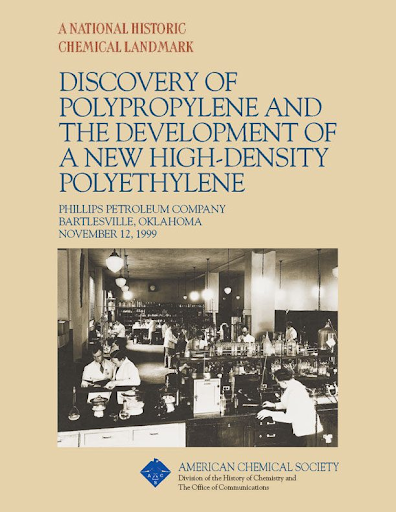 The ACS published this commemorative booklet to mark the occasion.

The development of high-density polypropylene would forever change the way we manufacture goods in our world today. The widely used plastic was such an innovation that in 1999 the American Chemical Society named its discovery a National Historical Chemical Landmark.

The designation was bestowed at the Bartlesville, Oklahoma facility of the Phillips Petroleum Company were the discovery was made.

Robert Banks and J. Paul Hogan are credited with the discovery, which involved finding a new process for creating solid polymers from hydrocarbons. Using their process, the two were able to produce crystalline polypropylene and polyethylene.

These two substances have been modified and refined to make most of the plastics that are widely used in our world today.. While the substances were initially used by toy companies, they can now be seen everywhere, from your bathroom to the factory floor. The Spindletop No. 1 gusher, which was originally drilled in 1901 and set the Texas Oil Boom in motion.

Texas saw its second big oil boom in 1925 when the Yount-Lee Oil Company began operations at The McFadden No. 2 Well. This massive well would go on to produce thousands of barrels of oil a day. The McFadden No. 2 was drilled somewhat south of the original Spindletop well, though it draws from the same formation.

The Yount-Lee Company was founded by Miles Yount, Thomas Peter Lee, and a number of other partners. Yount believed that the Spindletop Field, which had seen falling production after the initial boom, still had a bunch of oil in it.

His predictions proved to be right on that date in 1925, some 24 years after the Spindletop No.1 first produced oil. The McFadden No. 2 went down to 2,500 ft and its discovery fueled a second major oil boom in Texas.

This Week in Oil and Gas History: December 12 - December 18