This Week in Oil and Gas History: October 10 – October 16

The modern USOGA works on behalf of the oil and gas industry, particularly in states along the Gulf of Mexico.

The US Oil and Gas Association (USOGA) isn’t just a big force in the oil and gas industry today—it is one that has been governing this sector for over 100 years. While it operates under this name today, when the USOGA was first founded in 1917 in Tulsa, Oklahoma, it was known as the Mid-Continent Oil and Gas Association.

The organization was created just six months after the United States’ entered into World War I, with the intention of providing fuel and other petroleum products to the US military. Its founders included Frank Phillips, Bill Skelly, and E.W. Marland, all of whom were independent producers at the time.

Today, the USOGA has shifted their focus from providing fuel to the US military to advocating on behalf of the petroleum industry.

Apache County, Arizona produces all of the state’s oil.

Shell Oil finished the first oil well in Arizona in the 1950s, making it the 30th state to produce oil. The well, East Boundary Butte No. 2, was drilled just within Arizona’s northern border inside a Navajo County Indian Reservation in Apache County.

While this well initially only produced small amounts from Paradox Basin—it would eventually become more productive.

However, the real reason the establishment of this oil well was such a big deal, it because it had been a long time coming. While oil was reported in Arizona as early as the late 1890’s, attempts to drill wells proved unsuccessful for nearly 50 years.

The first attempts were made in 1903 by Joseph Heslet from Pennsylvania. He was never fully successful, even though his final attempt to drill a well in 1916 did produce small traces of oil.

The only wells that have yielded production in the state have all been located in Apache county. Close to 90 percent of the holes drilled in Arizona have been dry, and the state produces only small amount from less than 30 wells. 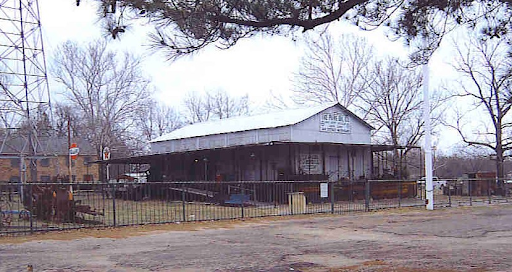 The Van Area Oil & Historical Museum is located in a building originally built as a warehouse for Cook Camp.

On October 14th, 1929, the Pure Oil Company discovered oil in Van, Texas, a small community outside of Dallas. The discovery would ultimately lead to the infamous Texas oil boom that lasted well into the 1930s.

Tapping into the Woodbine formation, the Jarman No. 1 well was followed by three more wells, which led to the establishment of Cook Camp—the first camp of its type designed to help the influx of workers who came to the area specifically to work in the mines.

By 1930, the wells would be producing tens of thousands of barrels per day. Two pipelines were built to bring oil from the wells to refineries. One pipeline lead to the Beaumont, Texas refinery, while the second pipeline, operated by Humble Oil joined the Standard Oil Pipeline that went to a refinery at Baton Rouge.

This was the first field in the Mid-Continent to be owned by two separate companies, but managed as a single unit to maximize production. Known today as unitization, this joint effort has become a common practice in many oil fields.

One of the buildings constructed for the camp, a sheet metal warehouse, is still in use today as the official home of the Van Area Oil and Historical Museum.

Van, Texas still hosts an annual festival to celebrate the discovery and boom that followed. 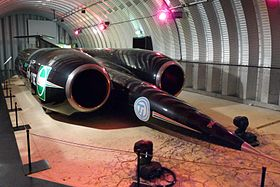 The Thrust SSC was the first land vehicle to break the sound barrier.

On this date, in 1997, kerosene was harnessed to power the fastest car in the world and to set a new land-speed record. The car, Thrust SSC (Supersonic car), used a kerosene and naptha fuel to propel it across the Black Rock Desert track in Nevada.

The fuel is called JP-4 and was first used as a jet propellant in 1951.

The record setting speed was 764.035 mph—making it the first land vehicle to break the sound barrier. The impressive time trial was even recorded in the Guinness Book of World Records.

Pipelines took jobs from teamsters, so they were buried so they couldn’t be sabotaged.

Pipelines have revolutionized the way we transport oil today and the first of these lines made its debut on October 16th, 1865. The first pipeline only ran about five miles across Venango County, Pennsylvania, from the Fraser well to the Miller Farm Oil Creek Railroad Station.

The line was only two inches in diameter and made out of iron pipe. The pipeline was made using welded joints of pipe 15 ft long and was powered with 10 horsepower steam pumps.

This small but efficient pipeline could transport 80 barrels of oil in an hour—a job that previously took 300 men about 10 hours to accomplish. 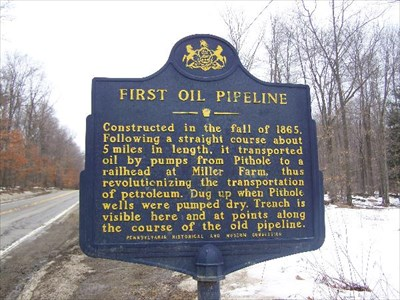 This marker in Venango, Pennsylvania is at the site of the first pipeline.

However, not everyone saw this improved efficiency as a good thing.

Another pipeline, from Pithole Creek to another well seven miles way, faced serious opposition and was sabotaged by teamsters worrying about their jobs. Armed guards would eventually have to proOctober 16, 1931 – Natural Gas Pipeline Recordtect the pipeline to prevent oil workers from damaging it. 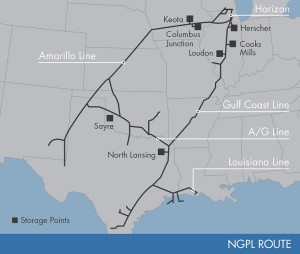 The modern pipeline follows a similar route to the one construction in 1931.

The first long-distance pipeline made its debut on October 16th, 1931. It connected the fields in the Texas panhandle to the city of Chicago. This was the first long distance pipeline, measuring in at over 980 miles and crossing three different states.

At the time, the project, cost over $75 million to complete, making it one of the most expensive feats of its time. This state-of-the-art project was made possible thanks to technology developed by A.O. Smith Corporation.

While the pipeline was crafted out of thin-walled pipe, it still used over 200,000 tons of steel.

This Week in Oil and Gas History: August 28 - September 3

This Week in Oil and Gas History: August 7 - August 13