Fluid is pushed up out of the formation and to the wellhead by a number of possible sources; the pressure from the formation may be enough to do it, or artificial lift may need to be used. Whatever provides the force, the fluid’s route to the surface is the tubing string. This tubing run down into the well within the casing. Tubing joints are threaded together into a long string, which is then perforated near the bottom to allow fluid from the formation to flow into the tubing. The tubing string is an integral part of the well, and so it should be well understood. 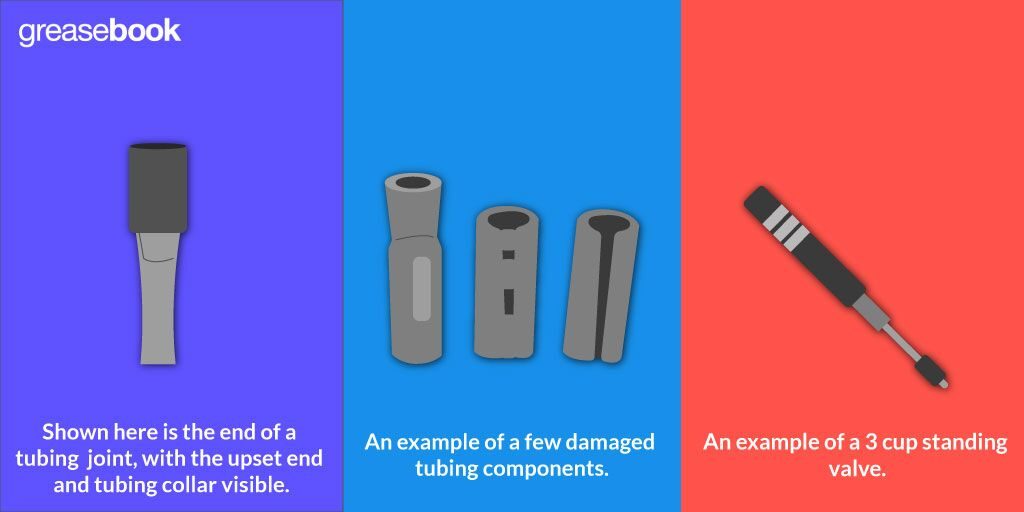 There’s a range of different tubing options with different wall thicknesses and of varying metal quality. The tubing is a seamless pipe that is sold in a range of irregular lengths from 28 to 40 feet. By selecting and assembling tubing joints of the right mix of lengths, a tubing string of any length can be put together. Shorter joints are called pup joints, which are available in lengths from 2 to 12 ft long, in 2 foot increments.

The outside of the tubing will be stamped with a mark showing its quality. While there are a whole range of options, and it’s a good idea to investigate options that might be tailored to specific situations, there are some types that are more common. These can include:

Joints are threaded so that they can be assembled into a tubing string. The threads may be v-shaped or round, referring to the cross section of the threading. V-shaped threading will have a cross section that comes to a point, similar to a wood screw. Round threading has a rounder cross section, similar to some types of bolts. Round threads are more common these days, though v-thread is common with older equipment. The round threads are hot rolled onto the metal of the tubing, and are therefore much stronger. 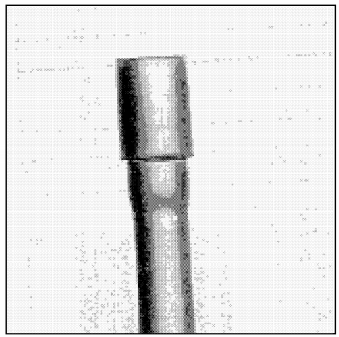 Figure 1. Shown here is the end of a tubing joint, with the upset end and tubing collar visible.

There’s no general standard when it comes to measuring the diameter of pipe and tubing used on an oil lease. Depending on what the pipe is being used for, the diameter listed for pipe or tubing might be the inside diameter (measuring the empty space inside the tube), or it might be the outside diameter (the total width of the pipe). Since tubing and line piping can sometimes be interchangeable, this can lead to confusion. However, one general rule can clear up most confusion. If the pipe is being used for line pipe, the inside diameter is measured, as the volume of production the pipe can handle is of more important. For pipe that is going to be used as tubing downhole, the outside diameter is the more important measurement. That is because it is the measurement needed to select tools for fitting and assembling the tubing string.

As an example, line pipe might be listed as 2 inches in diameter in lease records. If the same pipe is used for tubing, however, it would be listed as 2 ⅜ inch in diameter, as that includes the total width of the pipe. The two types of pipe can usually also be distinguished by length, with line pipe usually coming in 25 ft lengths and standard tubing sizes being longer and less regular.

The casing and tubing are both perforated to allow fluid to be pumped up to the surface. The relative placement of these perforations can have an impact both on production and maintenance needs. The tubing perforations can either be placed above or below the casing perforations, with implications for pressure, the accumulation of scale, and other issues. 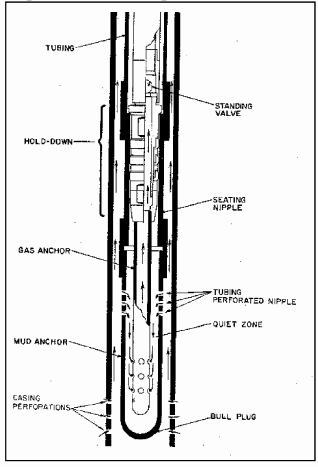 Other wells keep the tubing perforations below or even with the casing perforations. The goal is reducing reservoir pressure to improve production. While the lower placement may lead to an increase in maintenance problems, the production increase is enough to pay for the maintenance and still show an increase in profits. Tubing perforations may be lowered even if that doesn’t leave much room for a mud anchor. A joint of tubing about 2 feet long is custom made, closed on the bottom and with several dozen ½ holes drilled into it. It can be screwed to the seating nipple with a collar, reducing the length of the mud anchor to under 1 foot. The standard arrangement is to have the tubing perforations several feet above the casing perforations. The intent with this choice is to keep a slight back pressure on the formation rather than pumping the bottom of the hole dry.

Running and Pulling A Tubing String

It’s important that tubing strings are made up to the correct specifications. A loose joint can lead to a leak, which can be expensive and difficult to fix. If the joint is made up too tight, the threads of the coupling will be damaged. In most cases, hydraulic tubing tongs are used to makeup and break down the tubing string. Hydraulic tongs are generally superior to hand tools, as the correct torque can be set without the danger of damaging threading. Tubing should also be handled carefully when it is standing in the derrick and before it’s run into the well.

Before tubing is run into the well, a rabbit will usually be dropped through the joint. A rabbit, more technically known as a drift diameter gauge, is a length of pipe of a particular outside diameter. If the joint is not truly vertical, the rabbit will get hung up inside the tubing. The rabbit will also get hung up on scale buildups and other issues that will affect flow up to the wellhead.

The tubing string will have a few different components. While different operations may need additional equipment to address specific problems, most tubing strings will include a few basic parts. Each component should be recorded in the order it is run into the well.

The tubing string will primarily be made up of joints of tubing. Tubing joints come in odd lengths, so by combining different lengths of tubing joints a tubing string of any length can be created. The spacing of joints can be important as well. For example, wells using gas lift will need lift valves at specific heights. Pup joints can be used to make up specific lengths. Whether you use collars or couplings, they should be of equal or higher quality as the tubing used in the string.

When recording details of the tubing string, it should be indicated if the threading was included in the joints’ measured length. Over 100 joints, the method of measurement can change the length by as much as 15 feet. The most accurate method of measuring the length is from the top of one collar to the next with the slips removed, when it is hanging from an elevator.

A seating nipple is used to seal the pump to the tubing while allowing fluid to be produced to the surface. It’s a short length of tubing with upset ends that have tapered openings. A cup type seating pump will need a seating pump less than one foot long. Longer nipples can be reversed if the nipple becomes damaged. Some mechanical seating nipples may not be reversible.

Other components added to the string may include safety joints, packers, and holddowns. These should be included when recording the makeup of the tubing string. Specifics including brand, model, and any instructions for handling should also be included in the record. Some tools may remain downhole for years, and the instructions listed may be the only record of how to set or remove them. Wellhead hangers are added to the top of the string, and you may need to pull tension on the tubing string.

Most problems regarding the tubing string involve leaking joints, which can lead to a loss of production and can be difficult to locate. Leaks are usually caused by holes corroded into the tubing, or split tubing or collars. 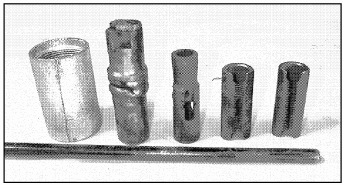 Figure 3. An example of a few damaged tubing components. Shown are a split collar, a brass pump part that has been damaged, a corroded part, and two sucker rod boxes that have been damaged by wear.

Leaks may lead to no fluid being produced at all, though the bleeder valve shows acceptable pressure. A leak can often be confirmed by using a pressure gauge at the bleeder valve and then closing the wing valve. By pumping against a closed in system, a leak can be detected. One person should be monitoring the pressure gauge while another standing at the switch or clutch. Going through the same process can also clear trash from a pump valve.

A split collar or hole in the tubing is usually pretty straightforward to identify, as they result in no production at the bleeder valve. Aluminium paint or another tracer can be mixed into oil and then poured into tubing. The tubing string is then pulled and watched for signs of aluminum paint on the outside of the tubing, which will point to the leak. The leaking joint can then be replaced and production resumed. It’s unusual to find more than one hole at a time.

Leaks can sometimes be more difficult to find. When that’s the case, a standing valve can be dropped down the tubing, to the pump seating nipple. The tubing is filled with fluid and then pressurized before the tubing is pulled. The fluid will drain to the level of the hole, which can then be easily found. The standing line can then be retrieved from the tubing string using the sand line and an overshot. The standing valve may allow you to release the fluid in the string, and therefore release the pressure, before it is unseated.

Figure 4. An example of a 3 cup standing valve. This particular one was manufactured by Harbison Fischer.

When tubing splits, it can be difficult to identify the problem and locate the split. With split tubing, oil may still be produced to the tank battery. In some cases, the bleeder valve may show acceptable pressure while no production is sent to the battery. Comparing the flow line pressure to past pressures may indicate a split tubing joint; a drop in the pressure will confirm that there is an issue.

If the leak is particularly sneaky and difficult to find, hydrotesting can be used to find the problem. With this process, the tubing string is pulled. As it is run back into the hole, two joints of tubing at a time can be tested under high pressure. Hydrotesting requires special equipment and a trained crew. Sucker rods are used to place the hydrotesting tool, which is 75 feet long. The tool is pulled up just below the slips for the test. It should not be pulled any higher, as that can be unsafe.

This Week in Oil and Gas History: October 24 - October 30