It’s common for the fluid pumped from a well to contain some amount of water, particularly in reservoirs that are driven by water pressure. As production volumes grow, and through the life of the well, the volume of water produced will increase. As the proportion of water in the fluid grows, specific vessels for separating water are going to be needed. The water that is separated out can be useful, and the equipment needed for handling it can also have more than one use. Understanding the equipment, other uses for it, and how to handle produced water are all important. 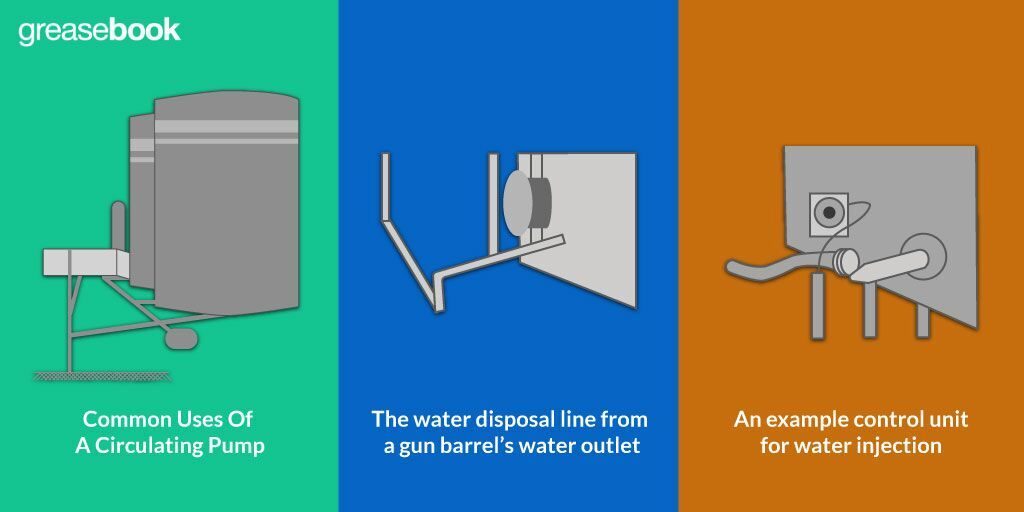 The heater-treater and gun barrel (also known as wash tank) are two common vessels used for separating out water, as well as gas, from the oil. There is also some other, more specialized equipment that can be used. 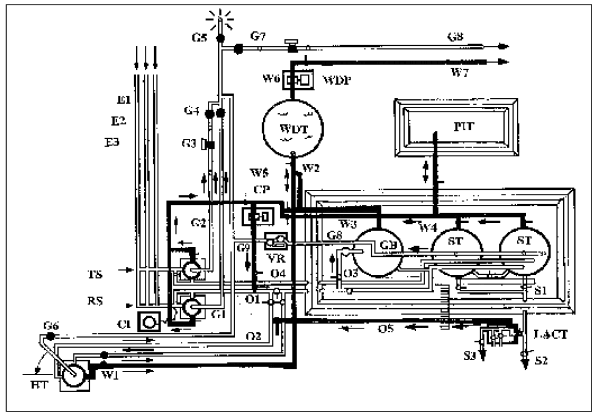 Figure 1. A diagram of the water disposal system, and the circulating system. Water flow lines are marked W.

Water In The Heater-Treater And Gun Barrel

Both of these vessels use gravity and a few other natural reactions to separate the oil, water, and gas. They don’t require any power, but merely time and a certain amount of liquid pressure to keep the fluid flowing. 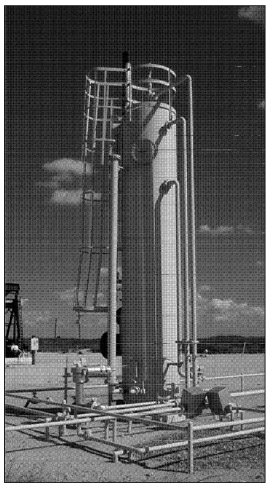 Figure 2. A heater-treater, showing inlet and outlet lines, as well as the water leg.

Crude oil enters through the inlet on the upper right side of the vessel in Figure 2. As it does, gas flash separates, meaning that it leaves the water within a relatively short period of time. Oil and water flows through a downcomer line to the bottom of the tank. The gas line is at the very top, then leading to the right, and pipes out natural gas released from the fluid. Oil floats to the top and the heavier water flows out through the drain at the bottom. Cleaned oil, which has had gas and water removed, flows out through the lowest right line, the closest in to the tank.

The water passes through the water leg, which is the small tower to the left. It consists of a larger pipe, a narrower pipe running inside the larger one, and a wider compartment at the top. Water flows from the drain up through the narrower pipe to the larger space at the top. Additional gas separates at this point. A small line runs from the the compartment to the top of the tank, equaling the pressure between the two. Water flows over the top of the smaller pipe, and then down into the outside leg and then to a dump valve.

Raising and lowering the water leg will change the water level inside the tank, also changing the amount of oil held in it. This can have an effect on the efficiency of separation, so while adjustments are sometimes necessary, it’s important to be aware of the consequences of those adjustments.

Both water in the water disposal line and clean oil in the oil flow line are both held to a height of about 4 feet above dump valves. These valves are usually controlled by a weight on a lever arm, which can be adjustable. Adjustments are generally unusual. The valves don’t control the height of the water in the tanks, only what’s held in the out flowing lines. The amount of liquid held in the tanks is controlled by height of the outlet lines on the tank.

Gun barrels operate in generally the same way as heater-treaters, lacking only a firebox to add heat to the separation process. Figure 3 shows an example of a gun barrel, with the emulsion entering an inlet on the left of the flume, the tower beside the tank. Gas breaks out at the top in the large compartment, and the liquid drops below where it enters the gun barrel and is then spread across the bottom. The clean oil flows out through the line near the top left of the tank and is piped to the stock tanks. 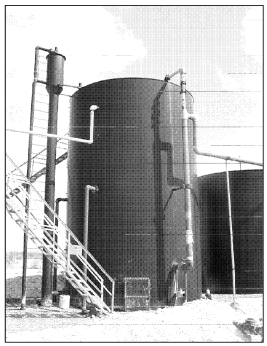 Figure 3. Gun barrel with a water leg on the right.

The water leg in this example is actually the thicker pipe attached to the top and right side of the gun barrel tank. Water is drained through the lower tank outlet on the side, and then up a smaller inner tube within the larger visible pipe. It then overflows at the top and is piped to the water disposal tank. The connection at the top is used to equalize pressure and stabilize the water leg. There’s also a support arm extending from the side of the tank and holding the pipe with saddle clamps. Some pipes, particularly plastic or fiberglass, need more support to keep the line stable, which helps prevent leaks.

For smaller operations, the circulating pump will usually be operated manually. As an operation grows and volume increases, that can become impractical and so automation is used. That usually requires some investment in upgraded equipment. However, it is worth it as the amount of time, equipment, and chemicals needed for separating the larger amounts of oil are reduced.

With automation, there is always the possibility that an error or malfunction could lead to a spill. In high volume operations where automation is more common, spills can be large and extremely costly. When using automation, keeping your equipment well maintained is vital.

The circulating pump can also be used to pump fluid for other purposes, including moving water for waterflood operations or disposal. It can be used to empty a vessel for inspection or cleaning, refill empty vessels, and for filling a tank prior to sale. It’s flexibility will depend on the system’s complexity. Some circulating systems are fairly basic and have only a few functions. Others are designed to be able to do more. The circulating system can’t be used for everything, but there are a few problems it is commonly used to solve.

Common Uses Of A Circulating Pump

The most basic problem a circulating system address is a rise in the amount of sediment and water in the oil. That has to be lowered before the oil can be sold, so the oil is circulated back through the separating vessels. As is explained below, care should always be taken that the vessels can handle the additional volume. 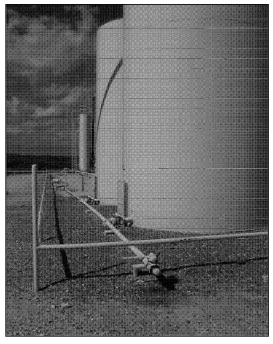 Figure 4. You can see the circulating pump in the background of this picture, next to the heater-treater. Also pictured are a stock tank and drain lines.

It’s also helpful to be able to drain any tank using a circulating pump. Tanks and lines will need be maintained and repaired many times in the course of pumping a well. Connecting the circulating pump to a tank’s drain allows you to empty the vessel fairly easily if you need to access the interior. Otherwise, emptying a vessel can be a time wasting pain.

Another common use is also helping to keep the bottoms of tanks clean. A regular circulation of oil through the system can help with this. But you’ll probably have to dedicate some time to cleaning tanks’ bottoms, which may require additional tubing that can be lowered into the tank and some other equipment. The circulating pump can make this operation easier.

A good circulating system should allow you to manage your water pumping and disposal needs while still allowing normal separation operations. The water outlet from those vessel should continue to feed into the water disposal tank, as that’s a gravity feed flow and therefore doesn’t need pumping.

A problem to be aware of when both these operations are underway at the same time is overflow, or build up of one or the other liquids. You’re pumping oil into the tank, so you want to make sure you keep the in and out flows balanced. Otherwise, you may end up pumping too much oil, forcing more water out of the tank than you want, which leads to a drop of separating efficiency. In some cases, you may begin to lose oil down the water disposal line. That sort of loss of balance can be a big problem, and should be addressed immediately.

You can also end up with too much of one kind of fluid for a few other reasons. Some are caused by errors in design, such as water lines that aren’t big enough for the flow or an incorrectly set water leg. Others are errors in operation, such as circulating oil for too long or not allowing the vessels to reach a balance after circulating. Some stem from changes in production, such as lower production, or a change in the weight of the water being pumped.

Water disposal tanks are usually fiberglass, and have some sort of cover to keep wildlife out. A small operation’s tank will hold one transport load of about 250 barrels of water. These tanks are about 8 feet tall, and may have guy lines or other equipment to keep them stable. Larger operations need greater holding capacity, and may have 20 ft tall tanks capable of containing a couple thousand barrels of water. The tanks will need to be inspected for water level regularly, so some sort of access stairway or ladder is necessary.

Water in the disposal tank can be reused for some purpose in the pumping operation. With those operations, a blanket of oil may be maintained over the water to prevent the water contacting oxygen in the air, which can lead to corrosion.

Water, if not used elsewhere in the operation, is usually injected back down a well to keep the reservoir’s pressure. For smaller operations, there’s simply a pump that sends water to an injection well (we go into more detail on water injection here: Second Stage Recovery Methods For Oil & Gas Production). 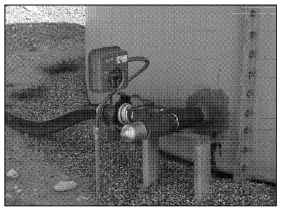 If that’s not possible, water may be hauled by truck to an injection well. A single load will be between 160 and 200 barrels. You may have to pay to have this water trucked and disposed of, if you’re not running your own water injection or water flood operation.