How I Became Known as the Wench with a Wrench…

When I began writing for Greasebook, the company’s founder, Greg Archbald, asked me if I’d be willing to write a few short pieces talking about who I am and “why a woman is writing a pumper’s blog”. (He didn’t really say that last bit… but I thought it was funny. 😉

I am a newspaper journalist and pumper.

I have written thousands of columns, and my least favorite subject matter is myself.

But I guess it gives you a chance to get to know who is giving you pumping advice. So, here goes:

I was born in the early 60s in a town called Ipswich, in Suffolk, England, because my father, Boyd L. Van Horn, was an Air Force fighter pilot.

While in the U.S. as a child, we lived in six different states; Texas, Arizona, Georgia, Pennsylvania, Virginia and Oklahoma. We moved about every two years because my father was in Tactical Air Command. He was stationed and ultimately retired at Langley, Virginia, home of the CIA.

At any rate, my father’s influence in my life is probably what prompted my decision to go into the Army. I ultimately spent 21 years in the Army and Army Reserve, mostly on reserve duty.

Around the time I was scheduled to retire, I received mobilization orders to Afghanistan in support of Operation Noble Eagle in early 2003. I was an Army fuel truck driver at the time. I always had a mechanical side to my personality.

As my unit and I inched toward deploying to Afghanistan, the Army decided, at the last minute, to extend the currently deployed troops who were already there and whom we were slated to replace. They put our deployment on hold, and during that time, my orders to retire came due, so I retired.

Frankly, I was sad about missing this deployment, but knew that as a single mother, my daughter, who was about to graduate from high school, needed me to be around. I viewed that as a bit of serendipity because there were a lot of combat casualties in Afghanistan between 2003 and 2004.

Nevertheless, after she graduated, and when I had a chance, I still yearned to serve. So I took a civilian position serving for four years as a military liaison in Iraq.  It was my finest service, and I will always be grateful for the lessons I learned while in combat. They continue to serve me today.

You may be wondering, “What does any of this have to do with the oil field?”

Absolutely nothing, except that when I came home after four years in a pretty heavy duty war zone, I needed to work outside. (I was present for just one too many chow hall bombings and IED attacks).

So when I got here, my best friend Evelyn, a 35 year career oilfield pumper, started training me to work full-time as a pumper.

Ironically, I landed my first full-time position not as a conventional pumper but as a Co2 and water flood pumper. This is a very complex type of pumping. There is a lot more pressure on tubing and casing and I dealt with a lot of submersible pumps (OMG—this is its own story). I also had quite a few pumping units, but again, working on everything in a Co2 flood, even changing stuffing box rubbers, is vastly different than in a conventional field.

While here, I also took care of a large central oil battery with five large Co2 compressors that ran 24 hours a day. We sold about 3,000 bbls of oil out of that battery per day and I also managed the production numbers. After nearly two years here, where I learned more than I can even write about in one blog, I wanted to move closer to my home. So I moved to a private company who had me watching 27 pumping units – all with C-106s.

This man’s field was in the Mississipian zone, and he ran those units 11 strokes a minute. I swear to you, it looked like a field full of Singer Sewing Machines. I also ran all four of this fellow’s salt water disposal batteries.

Sadly, this fellow, after a long day that we spent completing a well he had just drilled and brought on, sat down in his easy chair at home one day and died of a heart attack. After this, his family sold the entire field of wells and I moved to a company, that was even closer to my home.

Here I was pumping what in the business we call “strippers.” I had plungers, pumping units, free-flowing wells, and compressors of every breed. I loved it.

But I hated the corporate atmosphere. If I could have been left alone out in the field to pump wells without stressful phone calls from regional managers and engineers, some of whom had never even stood on a well location, I would still be into it full-time. Yes, I take full responsibility for my cranky inability to just ignore all of that.

These days, I write full-time and relief pump for a couple of very busy contract pumpers in my area. It’s the best of both worlds for me. 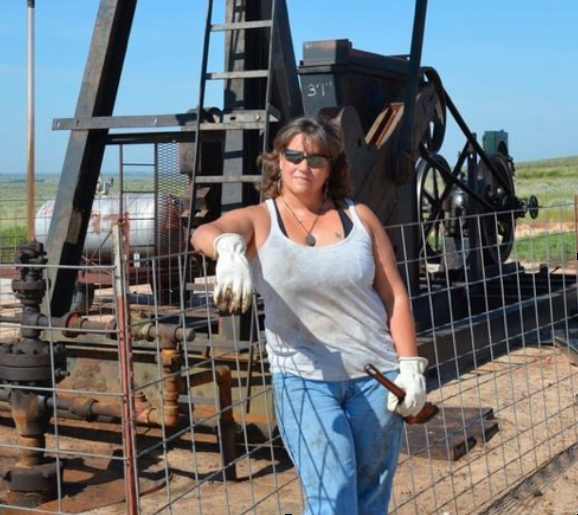 Me with one of my toughest leases, a unit with a 503 Fairbanks!!! Arghghggghghg.

You should know, I love the work of being a pumper. I love the feel of hand-starting a C-96 – you know, that little jerk when you give it a pull and it hits. And the exhilaration when you realize you got it done without losing your hand!

I love shutting down a pumping unit on a nice fall day to change stuffing box rubbers. I enjoy having time to think about life and watch snowflakes fall, while I wait for a plunger to come up so I can drop a new one. 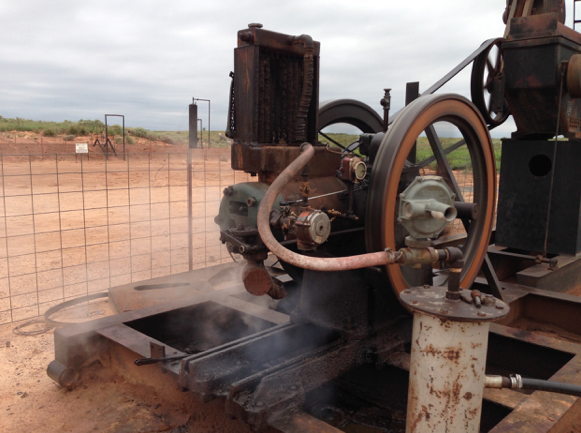 The Fairbanks problem child. I had to put a new head gasket on it on that day. These are the worst engines!!!

The work we do is the finest and most important in the oilfield today. It is on our backs that money is made or lost. We are there many days, weeks, months and years after drillers and completion folks have long forgotten the location.

I know that there is little recognition in this field for a job well done. Pumpers are usually the first ones blamed when something goes wrong and often overlooked when a location performs especially well.

On a particularly bad day, I called my best friend Evelyn and asked her why, after 35 years, she was still fighting this fight – still performing as one of the single most respected pumpers in the state.

She said, “Rachael, there are days when I feel like a bloody stump with no legs or arms floating in an ocean full of sharks, all taking chunks out of me. And for some reason, I must still like it, because I stay.”

June 4, 2017
« Previous post
Hail Mary, full of grace, blessed is your hardhat…
Next post »
Heater Treaters: 7 things you must know to (safely!) light a heater-treater
Copyright 2022 GreaseBook Oil and Gas Software. All rights reserved. Patents Pending. GreaseBook is a trademark of Greasebook, LLC.